A recent report that the blue whales along the California coast in the Eastern Pacific Ocean have recovered from the severe damage done to the population by commercial whaling, which continued up until the mid-1960s on these giants, has gone viral on the Internet. While the story is a positive one, there is room for some caution. 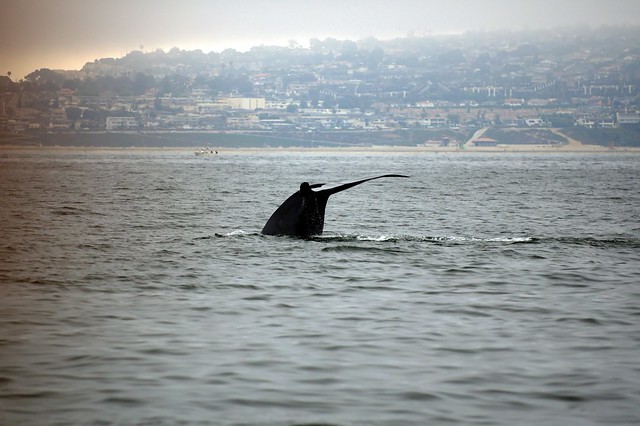 Photo by millerm217/FlickrBlue Whale spotted near Redondo Beach, CA. Of continuing concern is the fact that the seas the blue whales are swimming in are still in peril.

The headlines imply more scientific certainty about the findings than may be warranted, and blue whales still swim in an ocean with many dangers, including possible renewal of commercial whaling if some countries have their way. And, sadly, other populations of blue whales around the world remain severely depressed.

The blue whale is the largest animal on Earth, growing in the Eastern Pacific to a length of 80 to 90 feet. Their brethren in the Antarctic can exceed 100 feet and weigh up to 200 tons.

The increase in numbers over the years is not new news — whale-watchers, fishermen, and researchers have known for two decades that blue whales (along with gray whales and humpback whales) have increased in numbers offshore since the 1970s when interest in whales began to rise. Intense research with photo identification of blue whales to count the numbers has come to a conclusion that about 2,500 blue whales can be found in the Eastern Pacific from the equator to Alaska. Researchers photograph the blue whales on the surface and can identify individuals from coloration, scarring, and the shape and size of their small dorsal fins.

We know these whales can swim enormous distances, likely looking for feeding areas where their main prey, krill, are found in abundance, especially during the summer and fall months. They can communicate with each other using very loud low frequency sound, which can travel substantial distances in the ocean.

Of course, studies were never conducted on blue whale numbers before the period of intense exploitation. The Yankee whalers of the nineteenth century could not keep up with fast swimming blue whales with sails and oars. Plus if they were lucky enough to snag and kill a blue whale, the carcass would promptly sink. It wasn’t until the turn of the century that modern steam-powered boats and new techniques such as explosive harpoons and pumping air into the dead whales made the capture of blue whales and other similar species, like fin whales and sei whales, practical. The resulting bloodbath, interrupted only by two World Wars, would bring blue whales to the edge of extinction along with several other commercial species.

The University of Washington study is a good example of how math and computer models can reach detailed answers to difficult biological questions. Still, the records for whale kills are notoriously inaccurate. Not too many years ago, after the breakup of the Soviet Union, a Russian scientist found that Soviet whalers kept two sets of books on their whale kills. One they presented to the International Whaling Commission (IWC), which showed their compliance with restrictions of the IWC. But the other set of books revealed the truth: The Soviet whalers were killing protected species, mothers suckling calves, and undersized whales, and violating several other sound conservation practices. 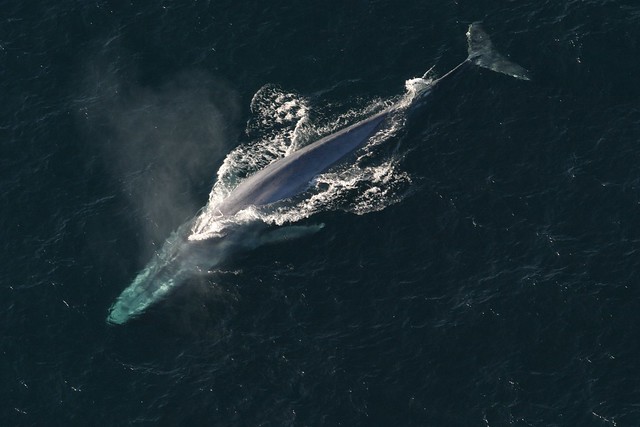 Photo courtesy NOAA Photo LibraryThe blue whale is the largest animal on Earth, growing in the Eastern Pacific to a length of
80 to 90 feet. Their brethren in the Antarctic can exceed 100 feet and weigh up to 200 tons.

Of perhaps greater concern is that the seas the blue whales are swimming in are still in peril. Large scale offshore oil drilling and accompanying air gun blasts to determine the presence of oil underwater are proceeding apace, spurred on by a US Congress and an administration that continues to allow oil companies to drill the ocean bottoms, despite oil spills and increased evidence that ocean noise is killing whales and fish.

Pollution from plastics, toxic materials, and plain old garbage is mounting, far exceeding the ocean’s ability to dilute the stuff. Along the Atlantic coast, pollution has often triggered outbreaks of toxic algae growth, resulting in large die-offs of coastal whales and dolphins. Fishing nets and ship strikes also pose a threat. (The University of Washington study rightly suggests the overall effect of ship strikes on blue whales is likely not going to have adverse effects on the population, but these kinds of mortality are cumulative along with other problems.)

Next week, the IWC will convene in Slovenia for another of their now every-two-years meetings. Norway and Iceland object to IWC moratorium on commercial whaling and continue to kills whales in the North Atlantic, including the endangered fin whale. The government of Japan is even more sneaky, issuing permits for so-called “scientific” research to kill whales, while not publishing any of the results of such studies and selling whale meat on the open market in Japan. Over the years the quota for the scientific research whaling has increased tremendously, and Japan has now killed thousands of whales in the name of science.

A decision by the International Court of Justice in The Hague (ICJ) in March ruled that Japan’s scientific research did not hold water and that Japan should immediately halt further research whaling cruises in the Antarctic. However, just this past weekend the Japanese government sent out “research” vessels into the North Pacific to kill 51 minke whales, and Prime Minister Shinzo Abe has announced Japan’s intentions to go back to research whaling in the Antarctic in 2015 with a revised study plan they hope passes muster with the ICJ. (The minke whales are the smallest of the baleen whales, and for that reason still exist in somewhat high numbers, as the whalers concentrated on the larger species. Now that the larger species are severely depleted, whalers concentrate on minke whales.)

The IWC has been unable to rein in Japan, Iceland, and Norway, and the ICJ decision may well be ignored by the government of Japan in its fatal race to clear out the last of the whales in defiance of science, conservation, and decency.

In the Eastern Pacific, the blue whales are making good gains. But as the University of Washington study notes (citing an older 1996 report), populations of blue whales in the Antarctic, where the Japanese whalers are still operating, are at only 0.7 percent of the region’s carrying capacity. Meanwhile, blue whales along the Chilean coast are at around 7.2 percent of capacity. The Eastern Pacific population is the only one to show a strong recovery.

It Takes a Village

In Tanzania, kids as young as 10 are leading the way in natural resource conservation. 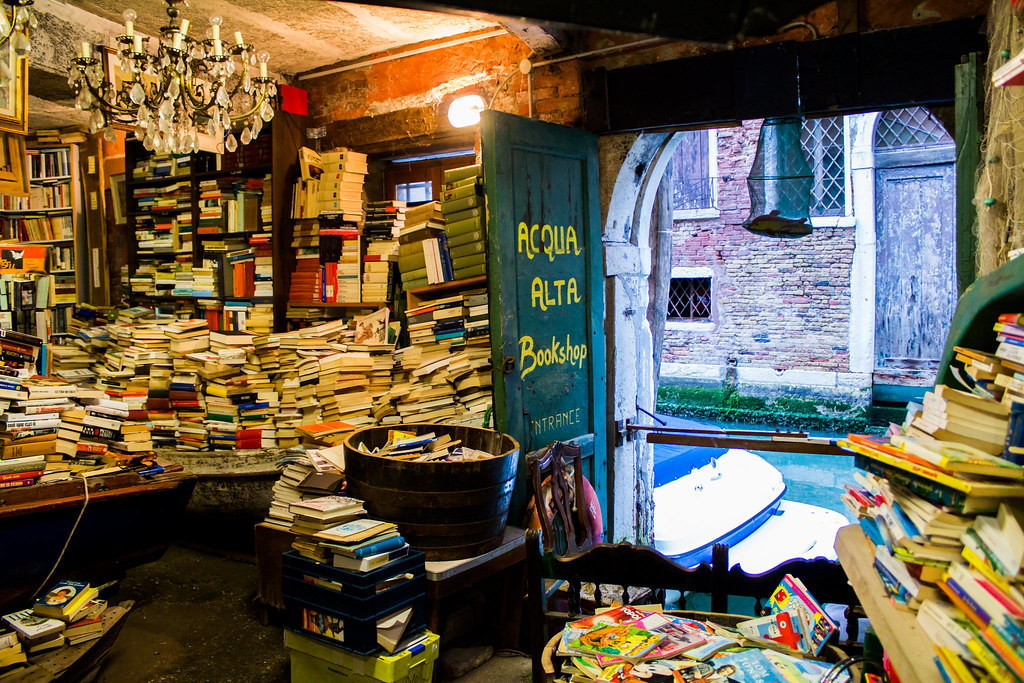 As both art and activism, landscape photography shows how nature changes, and how our perceptions of nature change with it.

Inside the Climate Battle Quietly Raging about US Homes

Away from the headlines, there’s an important fight happening that is pitting real estate developers and utilities against efforts to make America’s new homes more climate friendly.

The Toondah Harbor project in Moreton Bay, which is backed by the Australian government, would impact migratory bird and koala habitats as well as Indigenous sites.

Steven Donziger’s Persecution Must End, and Chevron Must Clean Up its Mess in Ecuador

Donziger has now been detained for more than a year in connection to his work seeking restitution for Amazonian oil pollution. 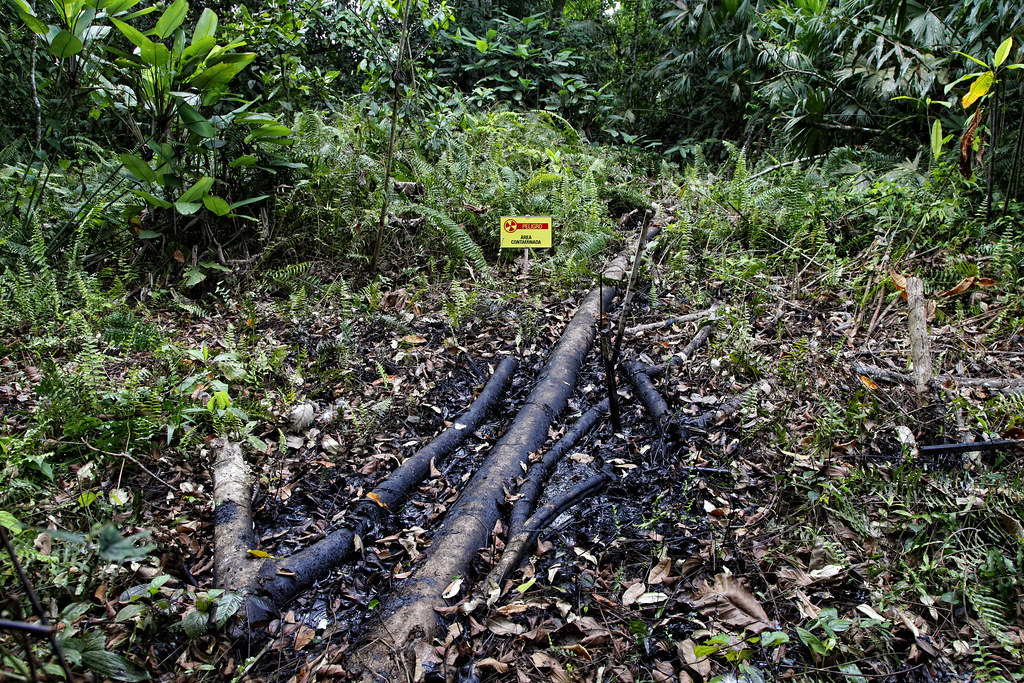