Fifty miles north of the Golden Gate Bridge, California’s Sonoma County is famous for its wine-country image — a patchwork of picturesque rolling hills and vineyards graced with moderate temperatures all year round. Beyond the grapes and quaint roadside tasting rooms, oak woodlands rich with black oak, Douglas fir, madrone, and California laurel provide habitat for abundant wildlife and ecological services like erosion control and water filtration to the surrounding area. Typically hot and dry from midsummer through late fall, these woodlands also comprise an ideal environment for wildfires. It was here that flames ignited on the evening of October 8, 2017, fueled by winds of 50 miles per hour. 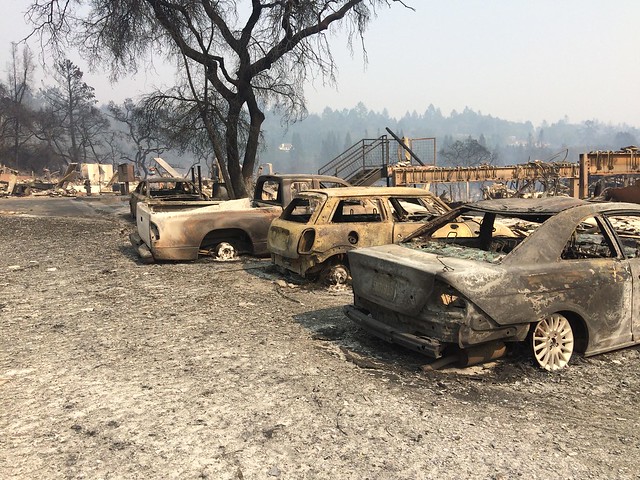 Photo by Martin EspinozaThe Tubbs, Nuns, and Pocket Fires burned some 250 square miles in Sonoma County, and claimed more than 20 lives. They also left behind a toxic trail, raising concerns about chemiclas seeping into the region’s farmlands and streams.

The fires, which also erupted in neighboring Napa and Mendocino Counties, spread quickly, reaching residential areas in the city of Santa Rosa late at night. Flames devoured nearly 250 square miles of open space and urban development, including 6,000 homes and business structures. The Tubbs, Nuns, and Pocket Fires also claimed more than 20 lives in Sonoma County, and sent a cloud of toxic ash over a wide stretch of the San Francisco Bay Area for weeks. Local ecologists promptly took action, driven by concerns about chemicals seeping into the region’s farmlands and streams, the Russian River, and eventually the Pacific Ocean.

“The concern about the toxic ash and fire runoff was becoming a priority,” says Erik Ohlsen, a Sonoma County ecologist and founder of the Permaculture Skills Center in Sebastopol. But, “the time frame was so small, the window was so small to do anything — how do you deploy on a scale that matches the scale of the fire, and process and strategize to catch and filter all that toxic ash?”

Ohlsen is part of the grassroots Fire Mediation Action Coalition that formed in response to widespread fire damage. In the aftermath of the fire, this group of ecologists, organic farmers, wildlife biologists, and residents discussed the probability of heavy metals, PCBs, dioxines, and a multitude of other chemicals contained in the ash contaminating local creeks, drinking water, and soil. Given the nearly 600,000 acres of agricultural land in Sonoma County, preventing chemicals from contaminating farms and vineyards was considered critical and urgent.

Within a week, dozens of volunteers began constructing wattles — straw-filled fiber rolls designed to prevent erosion — in hopes of mitigating some of the toxic run-off from Santa Rosa hillsides and neighborhoods, where thousands of buildings and automobiles had already burned. The winter rainy season was rapidly approaching as several thousand firefighters continued to battle existing flames and faced new fires emerging in other parts of the city. Ohlsen and his associates knew they needed to act quickly if they wanted to keep chemicals out of storm drains once the rains began to fall, and some members of the group expressed concern that the straw-filled wattles would not be enough to stop heavy metals and other toxins from entering the city’s drainage systems. They began to formulate a plan to inoculate wattles with oyster mushroom mycelium.

Bioremediation, the use of organic materials to break down environmental pollutants, isn’t a new concept, nor is the introduction of mycelium into bioremediation efforts — called mycoremediation, a term coined by famed mycologist Paul Stamets. Fungi have been used to clean up oil pools in Ecuador and pesticides in Oregon creeks, and mushrooms (and human hair) were deployed to remove some of the 58,000 gallons of oil from San Francisco Bay during the 2007 COSCO-Busan oil spill. 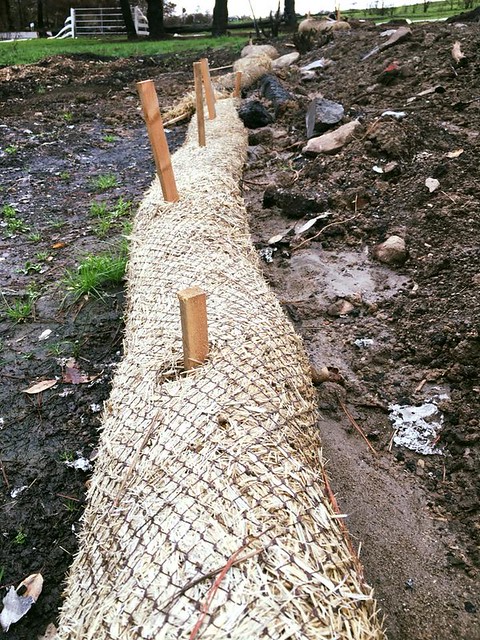 Photo by Chris GrabillIn the aftermath of the Sonoma fires, volunteers installed an estimated 300,000 feet
of wattles to assist with remediation efforts. Most of the wattles were inoculated with
mycelium known to break down hydrocarbons.

Although different fungi metabolize and break down different chemicals, oyster mushrooms are especially vigorous when it comes to the biodegradation of hydrocarbons. Gourmet Mushrooms, Inc., a mushroom producer based in Sonoma, offered oyster mushroom substrate for the wattles to strengthen local remediation efforts. Mycellium donations also began to flow in from as far away as Hawaii.

Meanwhile, Will Bakx, a soil scientist and owner of Sonoma Compost Company, was instrumental in providing compost and organizing volunteers to construct wattles at nearby West Marin Compost.

“Fungi can break down material and extend itself beyond the wattle that you are making so that your fungal network becomes much larger,” says Bakx, noting that both fungi and compost bacteria consume hydrocarbons. “If there is oil or gasoline coming down from any of the homes, they see that as food.” Bakx adds that, although the mycelium can help metabolize certain toxins, others like heavy metals cannot be destroyed. But wattles can also act as filters, preventing more tenacious toxins from entering streams.

“There are so many things stored in garages — we’re the only species that will build our homes and stuff them with toxins and things that are bad for us, and live in it,” says Bakx. “We use a lot of chemicals in our houses, we have all kind of plastics in our homes. When you burn plastics, you get dioxins. We have fertilizers, we have pesticides.”

So far, it’s not entirely clear how effective the effort has been. Volunteers were mobilized hastily in an attempt to rollout the bioremediation program ahead of the oncoming rains, leaving little room for a clear scientific process to identify toxins and to collect the appropriate soil and water samples necessary for long-term studies on the effectiveness of mycoremediation.

But Gabrielle Black, a doctoral candidate in the Agricultural and Environmental Chemistry Young Lab at UC Davis, is working with a team of researchers to identify toxins in ash samples collected from burn sites in Sonoma County. Black says this multi-lab project is being led by Irva Hertz-Piccioto, vice chair of research in the Department of Public Health Sciences, and includes air quality monitoring by Keith Bein (Air Quality Research Center), high-resolution chemical analysis by Tom Young (Civil and Environmental Engineering), and a health survey exploring a possible correlation between urgent care visits and ash or smoke exposure during the fires.

According to Black, who grew up in Sonoma, the Young Lab is identifying chemicals in ash collected along the path of the Tubbs Fire and originating from household chemicals. “Households contain thousands of chemicals — just think of all the ones under your kitchen sink alone. Burning this vast mix of chemicals at the same time holds potential for new chemical formation along with chemical degradation. We expect to see some familiar chemical constituents, partially degraded chemicals, more so than intact household chemicals.”

Black says many of the chemicals she and her colleagues identify will likely be transformation products from household chemicals, and that it’s difficult for the researchers to predict the toxicity of the resulting chemicals until they understand what they are. Nonetheless, she continues, “based on what we know about some of the flame retardants, pesticides, and antibiotics frequently present in homes, I would hypothesize that a portion of the toxicity associated with these known chemicals would be the same for some of the transformed chemicals, which would make their presence in surface waters a toxicological issue among aquatic species and other sensitive organisms.” Black says her team will be better equipped to hypothesize about potential remediation efforts once they identify the transformed chemicals.

“The truth is, [bioremediation] is totally experimental, and because of the scale of work, and the scale of handling that many structured fires and that much toxic ash, we had to move really quickly, which isn’t such a great scientific approach,” says Ohlsen. “At this point, we’re slowly working towards developing a much more rigorous scientific process” for testing and documentation of the effort.

Volunteers continue placing wattles at burn sites around the county. Chris Grabill, a board member with Sonoma County Conservation Action estimates that over 300,000 feet (roughly 56 miles) of wattles have been installed on more than 430 properties thus far. Sonoma County Conservation Action estimates that, because of the bioremediation efforts, 64,000 pounds of toxins have been kept out of local watersheds — an average of 150 pounds per property.

Meanwhile, California once again experienced record low rainfall this past winter, which many see as both a blessing and a curse. On one hand, the relatively dry weather allowed ecologists to put a system in place for preventing hazardous chemicals from reaching streams. Sonoma County was also spared the deadly flash floods and mudslides that devastated Santa Barbara County after fire swept through southern California in December. Conversely, fungi need moisture to thrive, and in many cases, the mycelium inoculated into wattles have not had opportunity to spread and provide additional filtration as originally hoped. Drought also brings fire conditions that make many people in the region understandably anxious.

“We’re in an extraordinarily unique situation,” says wildlife ecologist and educator Meghan Walla-Murphy, who points out that while California is certainly concerned about another drought, too much water could create powerful mudslides which could wash the wattles — along with toxins — off of hillsides, rendering bioremediation efforts useless.

Walla-Murphy, who has conducted extensive research on Sonoma County’s Russian River, says this isn’t the first time the river has seen the potential for an onslaught of toxins. She points to mercury contamination from mercury mining in the 1870s, formaldehyde dumped into the river in the 1980s, and present-day gravel mining, poor grazing practices, pesticides, and fertilizers —all of which have affected the health of the river and its biotic life, including struggling populations of chinook and coho salmon and steelhead trout.

Walla-Murphy says it’s difficult to predict what effects the fires will have on the river, which winds through central Sonoma County before draining into the Pacific Ocean north of Bodega Bay. “We may not see any differences and changes, and we might see really drastic changes. It’ll be tough, but thankfully in a lot of the areas in our river, we have years and years of data because of the salmon recovery projects.”

“We’re really seeing this as a multi-year process,” adds Ohlsen. “A process of setting up bioremediation systems and testing them, and tracking and documenting the results. Observing how the lands responds to fire in different zones where fire acted differently, and in areas where we had more toxic structures versus wild land areas.”

As ecologists strategize and seek funding for more in-depth research and evaluating the effectiveness of bioremediation and mycoremediation in Sonoma County, many hope that these efforts might serve as an inspiration to other communities at risk of urban fires.

“These fires will happen again,” says Bakx. “So the more knowledge we have, the better we can address the fires and protect other neighborhoods, other water systems from pollution.”

Walla-Murphy agrees. “Often what I say to my classes is, imagine we’re the Titanic and we’re going to hit the iceberg — we know that’s inevitable. The question is, how hard and how fast do you want to hit it?”