In a trifecta of dramatic outcomes, Wednesday May 26 saw ExxonMobil, Chevron and Shell each take it on the chin.

It has been a terrible, horrible, no good, very bad week or so for Big Oil…and that’s a very good thing for our climate.

Last week, the International Energy Agency released the groundbreaking “Net Zero by 2050” report, which they described as “world’s first comprehensive study of how to transition to a net zero energy system by 2050.” As OCI’s Kelly Trout outlined in her analysis last week, this first 1.5°C-aligned model from the IEA “closes the door on new fossil fuel extraction.” 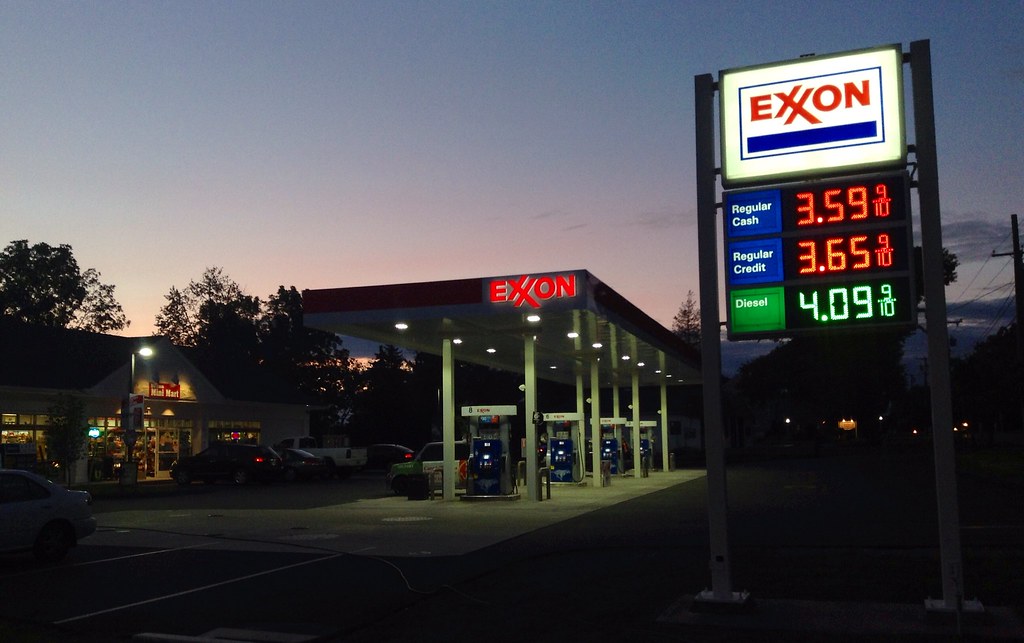 Yesterday, ExxonMobil shareholders voted in at least two new directors promoted by an activist shareholder concerned about the firm’s approach to the climate crisis. ​Photo by Mike Mozart.

In bold lettering, the IEA concluded: “There is no need for investment in new fossil fuel supply in our net zero pathway,” adding, ““Beyond projects already committed as of 2021, there are no new oil and gas fields approved for development in our pathway, and no new coal mines or mine extensions are required.”

The shockwaves of this report were global in scope. Headline after headline highlighted this finding as oil companies and government leaders scrambled to respond.

But the fun didn’t stop last week for Big Oil and Gas. In a trifecta of dramatic outcomes, merely a week after the IEA’s report came out, Wednesday May 26 saw ExxonMobil, Chevron and Shell each take it on the chin.

We’ll start with Shell. In a landmark ruling, a Dutch court ordered Shell to cut its Scope 1, 2 and 3 emissions 45% by 2030, a far more ambitious goal than the emissions-intensity goals for Scope 1 and 2 emissions that the company had set for itself. As Gizmodo’s Earther put it simply: “Shell just got wrecked in Dutch court.”

My colleague Andy Rowell has more in his post today here. We at Oil Change are particularly proud of our own Laurie van der Burg, who played a key part in this lawsuit from the start. You can watch a clip of her talking about the case on German television’s Deutsche Welle here:

But Big Oil’s terrible, horrible, no good, very bad week didn’t end with Shell’s loss in court on Wednesday. In nearly simultaneous shareholder meetings mere hours after the Dutch court handed down its ruling on Shell, Chevron and ExxonMobil also saw major rebukes from shareholders due to their climate intransigence.

At the Chevron meeting, shareholders voted in favor of targets to reduce the company’s scope 3 emissions, or the emissions related to the actual burning of the oil and gas the company produces. The vote, with an impressive 61% of shareholders in support, came at the vehement objections from Chevron’s management.

Moments later, after a dramatic and lengthy recess in their own shareholder meeting that reportedly saw Exxon management scrambling to shore up votes that never ended up coming, ExxonMobil shareholders voted in at least two new Directors promoted by an activist shareholder concerned about the firm’s approach to the climate crisis. The vote is so tight that as of publication it’s still not clear whether two additional insurgent Board candidates will be voted in as well, but at least two of these new Directors have been tentatively elected.

Reactions from journalists and industry watchers featured a range of shock and awe as the reality of Wednesday’s shareholder and court actions against some of the very biggest oil companies came into clear focus.

The Chief Energy Correspondent at Bloomberg news, Javier Blas, called this collection of developments in the world of Big Oil a “turning point.”

Activist Bill McKibben called May 26th an utterly crushing day for Big Oil (he’s also got a great New Yorker column on it all here):

The Financial Times’s David Sheppard asks if it was a “nightmare” for Big Oil.

And, The Guardian called it “cataclysmic” (with a side of hope for the rest of us).

What all these observers are getting at is this: The fossil fuel fatalism we have seen for generations is finally running its course. No longer are the courts, investors, and the public going to allow oil industry CEOs to obfuscate, to greenwash, or to avoid accountability for their climate crimes and intransigence. The day of reckoning for Big Oil has come, and it’s thanks to activists fighting for decades.

We have a long fight still ahead, but the events of the past week may indeed mark a critical turning point in our fight. So, we’ll conclude with this — a clip of cheering for the heroes at Millieudefensie, who brought the case against Shell in the Netherlands, as they emerged from court victorious (sound on):

David Turnbull is the Strategic Communications Director at Oil Change International, developing communications, campaign, and narrative strategies to bring Oil Change’s research on the financing, influence and impacts of fossil fuels to the public, the media, and decision-makers. Follow him @david_turnbull @david_turnbull