Berkeley Bellwether: What the Soda Tax in this City Means for the Country

The face of Berkeley vs. Big Soda is the face of mainstream America
Anna Lappé

At Tuesday night’s Berkeley vs. Big Soda victory party in the heart of downtown, the results rolled in slowly, but spirits were high. Early returns around 8:00 p.m., with only 8 percent of precincts reporting, showed the people beating Big Soda by a huge margin. The margin held. 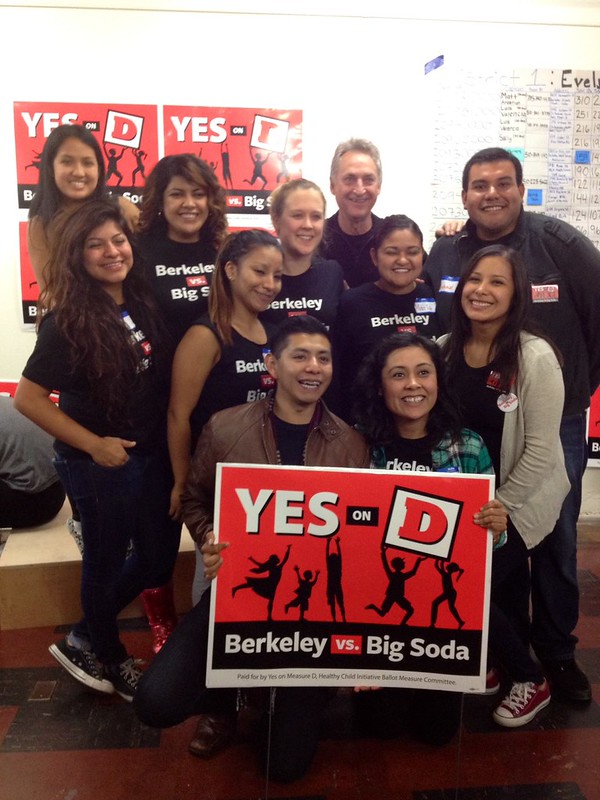 Photo courtesy Berkeley vs Big SodaThe massive industry campaign to defeat the tax works out to $409 for each vote industry got in its favor. This was a big fail for Big Soda — and an expensive one.

The final tally had the Yes on D campaign winning with 75 percent of the vote, but not for Big Soda’s lack of trying. According to the most recent data available, Big Soda had poured $2.3 million into its fight against this simple and modest tax of one cent per fluid ounce of sugar-sweetened beverages, a proposal that was supported by every single elected official in the city. The massive industry campaign to defeat the tax works out to $409 for each vote industry got in its favor. This was a big fail for Big Soda — and an expensive one.

By last week, the soda industry was starting to unveil its new spin on the impending loss: Berkeley is weird. A win here, Big Soda would like us to believe, is an aberration. With the win locked in, the industry is pushing hard on the “wacky Berkeley” meme. It’s doing so because the other lesson from this resounding vote is that it’s a game changer — a signal of the beginning of a seismic shift in how we treat soda and sugary drinks in this country. That lesson is a huge threat to Big Soda. So the drumbeat of Berkeley weird will continue. After the results were announced, Roger Salazar, a representative from the industry’s campaign told the Associated Press, “Berkeley is very eclectic;” he told the San Jose Mercury News that Berkeley “doesn’t look like mainstream America.”

But Salazar wasn’t at Berkeley vs. Big Soda HQ on Tuesday night. Had he been, he would have seen just how wrong he was.

He would have seen the face of soda tax supporters: young and old, African-American, Latino, immigrant — people from all social and economic classes. He would have heard from people like Kad Smith, a recent Berkeley High School graduate, a staffer at the non-profit Ecology Center and a key force in the campaign. And from Lolis Ramirez, a trained organizer with a background in nutrition, who was the powerful campaign field director. And Josh Daniels, a key player in the coalition for the tax and a member of the city’s School Board. And Joy Moore, a long-time public health advocate, and one of the original members of the soda tax coalition. He would have seen the gathered crowd of supporters. He would have seen that the face of Berkeley vs. Big Soda is the face of mainstream America.

Whether the soda industry wants to admit it or not, the public health crisis associated with the overconsumption of sugary drinks, including skyrocketing diabetes is mainstream: One in three children born today is now predicted to develop diabetes at some point in their lifetime; the figure jumps to one in two for African-American and Latino children. Sugary drinks are key culprits in this crisis, the single largest source of added sugars in our diet with no nutritional benefit.

What Salazar would have learned is what everyone sensed Tuesday night: What happens in Berkeley won’t stay in Berkeley. Berkeley may be weird, at times, but it’s also a bellwether. It was the first city in the nation to voluntarily desegregate its schools, to provide curbside recycling, and to create curb-cuts for wheelchair accessibility. Now, it’s the first US city to pass a tax on sugary drinks. This win, like those that came before it, will spread across the country. As Joy Moore told me on Tuesday: “The conversation has changed. There’s no going back.”