San Miguel in Baja, California, is said to be where the first wave was surfed in all of Mexico. The area also contains one of the last intact riparian corridors in all of northern Baja — the San Miguel watershed. This critical riparian ecosystem leads up to the beach, bringing with it sand and rocks that pile up and create a rock land formation that provides perfect conditions for a classic, long wave that wraps around the beach. The waves draw thousands of surfers to the area every year. 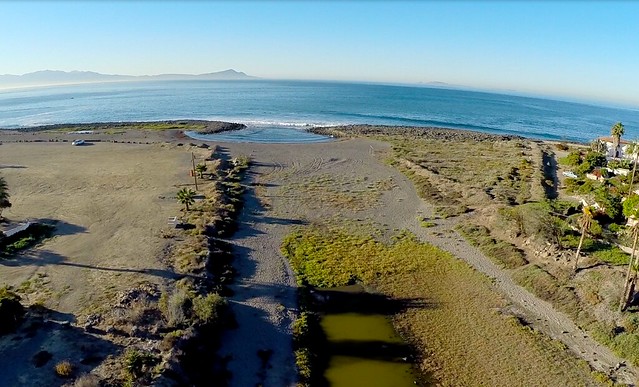 Photo by courtesy of Surfing for ChangeThe San Miguel watershed leads up to the beach, bringing with it sand and rocks that pile up and create a rock land formation that provides perfect conditions the classic waves here.

The watershed, additionally, is also critical habitat for a number of native and endemic species, an important source of drinking water for local residents, and provides a needed open space for the beachside community of Ensenada. But like every other beachfront area, the San Miguel watershed and the iconic waves it helps create face a slew of pressing threats such as continued urban development, sand mining, and trash dumping.

In the face of these threats, a coalition of local and international environmental and surfing groups are backing an initiative by the Mexican environmental organization Pronatura Noroeste, to preserve 58 hectares of the San Miguel beach and watershed as a state park. “We have the chance to do something proactive, and protect something before it needs saving”, says Nik Strong-Cvetich, Executive Director of Save The Waves Coalition, one of the groups supporting the park initiative. (Other groups include SurfEns, Wildcoast and the Bahía de Todos Santos World Surfing Reserve.)

As part of this campaign, former Brower Youth Award winner Kyle Thiermann and his organization Surfing for Change have created a short documentary that explores the connection between the health of the San Miguel watershed, the quality of the classic wave here, and the campaign launched by surfing and environmental groups to protect the area.

Through the campaign, Save The Waves and World Surfing Reserve local partners will be trying to deliver 10,000 signatures to the Governor of Baja California to show local and international support for creation of the San Miguel State Park. Save The Waves will also demonstrate the local economic impact of the state park through an economic valuation study of the wave. Help them reach their goal by signing this petition.