Awe May Be a Forest’s Least Known Gift

The perception of the interconnections among things is what inspires this powerful emotion, say researchers
Mike Shanahan

In 1836, in his essay Nature, Ralph Waldo Emerson described the powerful effect that being in woods had on him: “Standing on the bare ground, my head bathed by the blithe air and uplifted into infinite space, all mean egotism vanishes. I become a transparent eyeball; I am nothing; I see all; the currents of the Universal Being circulate through me; I am part or parcel of God.” 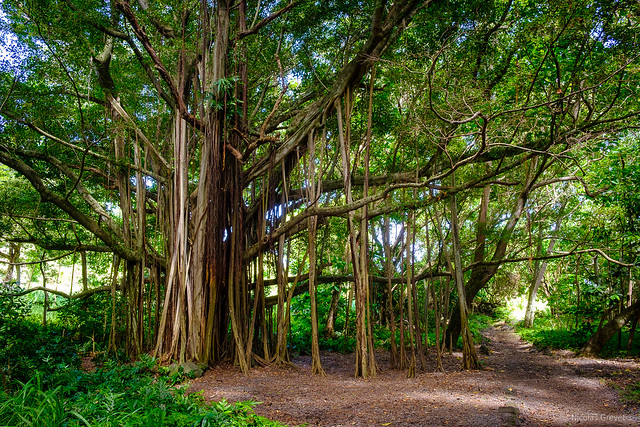 Photo by Nicolas Grevet The natural world — with its domineering mountains, colossal trees and tall waterfalls — is one of the main sources of awe.

What Emerson felt was awe. It’s a sensation I have experienced often in forests. I felt it first when I was a young boy at the feet of the biggest tree in the world. I felt it next as a young man, when I walked in a tropical rainforest for the first time, in Sri Lanka. Here’s how I described it in my book Gods, Wasps and Stranglers.

“All these things seemed insignificant in the presence of the forest itself. It hugged all it contained in a humid, humming gloom. The trees towered over us, viscerally alive yet so alien to our animal ways. Their breath sweetened the air we inhaled. It is hard to explain, but I could feel the concentration of life around me, as if its great density there had somehow reached into me physically. What struck me was the neutrality of that force. There was no malice or love there, just existence.”

Awe is that feeling of being in the presence of something immense and mind-blowing. The natural world — with its domineering mountains, colossal trees and tall waterfalls — is one of its main sources. In 2003, psychologists Dacher Keltner and Jonathan Haidt wrote that “nature-produced awe involves a diminished self, the giving way of previous conceptual distinctions (e.g., between master and servant) and the sensed presence of a higher power. Natural objects that are vast in relation to the self … are more likely to produce awe.”

I asked Keltner what it might be about forests — as opposed to, say, single very large trees — that inspires feelings of awe. “I think it’s the perception of collectivity in forests,” he said, “where the eye doesn’t focus on one object but on interconnections amongst many.” That chimes with my experience. When you walk in a tropical forest, the sheer abundance and variety of life all around can have a powerful and somewhat disorienting effect on your brain.

It’s a positive experience. Keltner’s research has revealed that awe is good for our minds, bodies and relationships. Awe may even make us kinder. It appears to encourage us to look beyond ourselves and to cooperate with others. Tapping into this power may be as simple as taking a walk in a forest; the less familiar it is, the better — Keltner and Haidt say nature is more likely to produce awe if it transcends one’s previous knowledge.

Here’s how Alfred Russel Wallace, co-discoverer of evolution, described his first experience of the forests of SE Asia. “When, for the first time, the traveller wanders in these primeval forests, he can scarcely fail to experience sensations of awe. There is a vastness, a solemnity, a gloom, a sense of solitude and of human insignificance which for a time overwhelm him.”

With so much life vibrating in one place, it is hard not to feel some connection to the rhythm. Forests have given me that sensation many times. Part of its power is how it reveals that all life is connected, and how small we are in the greater scheme of things. The sensation is both grounding and enlivening.