Timothée Mbuya believes the attack is linked to a report he published on encroachment into protected areas.

This article originally appeared on Mongabay.

Armed assailants recently attacked the home of Congolese environment lawyer Timothée Mbuya. Mbuya, head of human rights NGO Justicia, is fighting a defamation lawsuit related to his criticism of a farm owned by the former president of DRC, Joseph Kabila. While it has not yet been established who was behind the attack on Mbuya’s home, campaigners say it fits a broader pattern of harassment and intimidation of activists in Katanga province and beyond. 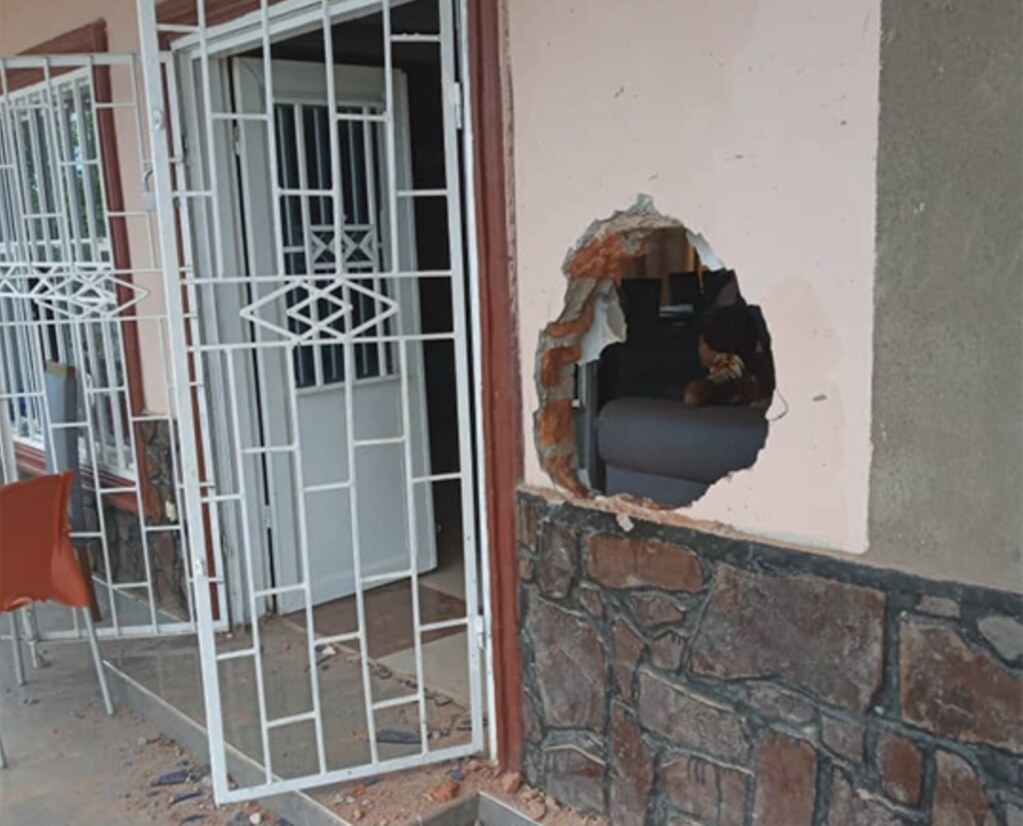 At least six men, armed with hammers and AK-47s and wearing balaclavas, smashed a large hole in the wall to gain entry to Mbuya’s property in Lubumbashi. Image courtesy of Timothée Mbuya.

At around midnight on January 12, at least six men, armed with hammers and AK-47s and wearing balaclavas, smashed a large hole in the wall to gain entry to the property in Lubumbashi, the Katanga provincial capital, where Mbuya’s wife and children and several members of his extended family were sleeping.

For more than an hour, the men threatened to kill family members, including the activist’s 9-year-old son, unless they gave up his father’s location. The attackers, two of whom Mbuya says were dressed as police officers, eventually left, taking mobile phones, a laptop, and jewelry.

“They repeatedly stated they were sent to kill me,” Mbuya told Mongabay by phone from an undisclosed location.

Mbuya said he believes the attack is linked to a report on encroachment into protected areas published by Justicia in September 2021, which among other things alleged that Kabila’s farm, Ferme Espoir, has illegally encroached on Kundelungu National Park.

“Given how these people arrived, how angry they were, the [length of] time they were able to stay undisturbed, the fact they said they hadn’t made a mistake with the address, and that they knew who they were after, yes, it’s safe to say there might be a connection,” Mbuya said. “Maybe there’s someone who wants to punish me for, as they see it, humiliating Kabila during the judicial procedure.”

Prior to the January 10 defamation hearing (which was adjourned for two weeks), Justicia had received numerous WhatsApp messages from unknown numbers accusing the NGO of attacking the interests of local Katangans by criticizing Ferme Espoir. “We could never have imagined that the day after the hearing he’d be subjected to an attack of this magnitude,” said Jonas Mulumba, one of Mbuya’s colleagues at the NGO.

Mulumba helped Mbuya report the January 12 assault to the Lubumbashi military prosecutor and filed a request for protection. They were told Mbuya would need to pay $100 per day for each police officer assigned to protect him — a prohibitive sum in the DRC, where three-quarters of the population live on less than $1.90 a day.

Lawyers for Ferme Espoir did not respond to repeated requests from Mongabay for comment.

Justicia is not the only organization to have spoken out against Ferme Espoir’s activities in Kundelungu.

“We have been many to sound the alarm on the land grabbing [taking place] at Kundelungu National Park,” Rams Wasolela, coordinator for the citizen movement La Voix du Peuple (The Voice of the People), told Mongabay.

In May 2020, Wasolela was abducted by three still-unidentified individuals. His disappearance followed a series of social media posts in which he deplored the security situation across Lubumbashi and called on people to rise up in protest. Wasolela was held for four days and beaten and starved, before being force-fed food laced with an unknown substance. “I still haven’t fully recovered from the poisoning,” he said. 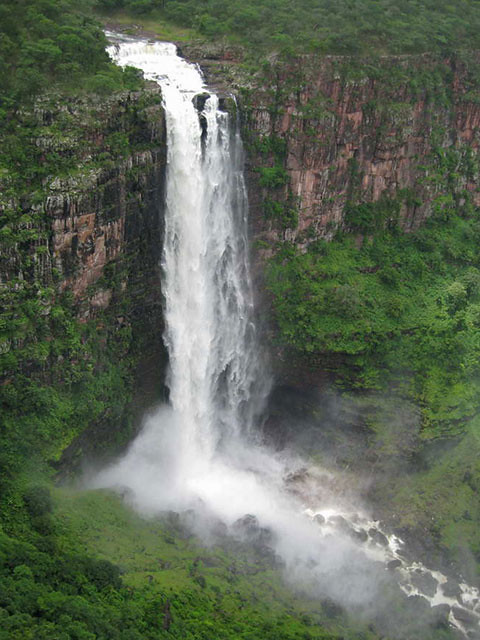 Lofoi Falls in Kundelungu National Park, one of the largest waterfalls in Central Africa. Prior to the attack on his home, Mbuya published a report alleging encroachment into the park. Photo by germanik62 / Wikimapia.

No arrests have been made in connection with his abduction. According to Wasolela, the situation remains fraught for anyone involved in speaking out against perceived abuses of power. “The climate we operate in remains as precarious as ever. We don’t have a say. When you criticize those in power, or say a word regarding the management of that power, or speak out about the mistreatment of human rights defenders, or give an opposing opinion, they track you down and threaten to kill you. Activism isn’t a crime.”

Jean François Mombia Atuku, president of RIAO–DRC, an environmental and human rights umbrella group that brings together several dozen organizations and farmers’ associations across the country, returned to the DRC in October 2020, after eight years in exile. In June 2021, he was summoned by the High Court of Kinshasa, accused of unspecified “infractions.” No plaintiff was named on the summons, which coincided with his attempts to raise awareness of the industrial pollution of the Aruwimi River in the country’s northeast.

Mombia said commercial and political interests were using the justice system to bully human rights and environmental defenders. “Today, with the eyes of the international community increasingly on DRC, they have resorted to using the courts to harass people,” he said.

Justicia’s report accuses Ferme Espoir of illegally putting up fences outside its boundaries, enclosing a section of Kundelungu National Park, along with the wildlife there. The NGO’s report also highlighted the impact of local villagers growing food for themselves on “vast expanses of [national park] land” — village leaders say they are unaware of Kundelungu’s boundaries — and warned of the threat posed by a proposed hydroelectric dam in nearby Upemba National Park.

The farm in question, which produces corn and poultry, covers at least 700 hectares (1,730 acres). The company owns and operates several large-scale farms around the country and is one of the DRC’s largest agribusiness players. Kabila, who was the DRC president from 2001 to 2019, is understood to have an 80 percent stake in the company, with the rest owned by his son and daughter.

A commission led by Albert Massi Bamba, a military general who commands the corps responsible for securing national parks and related reserves (CorPPN), visited the Katanga farm last October to assess “anthropogenic pressures in Kundelungu National Park and the situation related to the presence of Ferme Espoir … and to be clear about any invasion or encroachment.”

Massi’s report, seen by Mongabay, does not make clear whether the farm, in fact, encroaches on the national park. But a government official who requested anonymity as they are not authorized to speak to the media told Mongabay there was “at least overlap with the annexed hunting grounds, which is in itself problematic.”

Although not part of the national park itself, the hunting grounds are also a protected area, under the remit of the ICCN, the Congolese Institute for Nature Conservation. Mongabay understands that a second delegation is expected to visit Kundelungu National Park and Ferme Espoir in February to specify the farm’s precise location in relation to protected areas. The NGO Civil Society, Environmental and Agro-Rural Congo (SOCEARUCO) has also taken a stand against human pressures on Kundelungu. Its president, Josué Aruna, has been closely monitoring the events of the past week. He said the farm’s lawyers should have sued all of Ferme Espoir’s critics, not just Mbuya and Justicia.

“We are all working together to ensure that this country is behaving in an environmentally responsible way,” he said.

“Many of us have interpreted these events” — the defamation lawsuit and the attack on Mbuya’s home — “as a way to scare environmental defenders into submission and silence,” Aruna told Mongabay.

“We can’t claim to be a climate change solutions country whilst allowing the ongoing theft of protected areas — which, be it between pan-national and/or foreign operators, is an issue everywhere in DRC,” he told Mongabay. “If the courts end up finding in favor of Ferme Espoir, we’ll be left with no option but to consider that all protected areas that have been thus legally classified, will be open to a similar fate.”

Aruna described the attack on Mbuya’s home as “a knee-jerk reaction” borne out of frustration. “With regards to Ferme Espoir, Monday’s hearing [Jan. 10] put the farm on a poor judicial footing that exposed a weakness, [the farm’s supporters] have other means to show their strength.”

From a safehouse, Mbuya said that while the attack has left him fearing for his family’s safety, he will not be silenced: “It’s imperative that we react appropriately and that justice is seen to be done. Otherwise, it will discourage other activists [from speaking out] not just here in Lubumbashi, but across the country.”

Mbuya called on his colleagues to draw strength and pride from the incident. “It demonstrates that we are working effectively,” he said, “and that we are striking people right where we need to.”

Soraya Kishtwari is a freelance journalist based in Bogotá, Colombia. She lived in the Democratic Republic of Congo for three years. You can find her on Twitter at @sorayakishtwari