‘Building Artificial Glaciers Is an Enterprise of the Future’

The spectacular arid Himalayan region of Ladakh, which lies northwest of India’s capital New Delhi, has seen a pronounced decline in snowfall and warmer and earlier springs in recent decades. This means the snow melts before the short growing season, reducing the amount of water farmers can access over the summer. To help farmers overcome this water shortage, Sonam Wangchuk, a local environmental engineer, is creating small artificial glaciers, or “ice stupas,” by freezing stream water vertically in the form of huge ice towers, or cones, of heights ranging from 15 to 50 meters. These ice towers look very similar to the local Buddhist shrines and can be built right next to the villages where the water is needed. 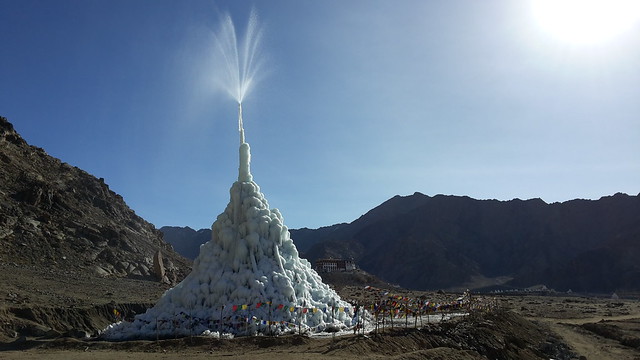 photo by Lobzang DadulAn ice stupa near Phyang village in the Himalayan region of Ladakh. These small artificial glaciers can provide water to farmers in early summer.

Wangchuk was among five people from across the globe who bagged an award for enterprise in November 2016 following this innovation. He says the ice stupas or “small glaciers” need very little effort and investment and can be created for all the villages that need water for agriculture and other uses in early summer. He says that, fortunately or unfortunately creating artificial glaciers will be an occupation and enterprise of the future given the impacts of climate change.

Athar Parvaiz: Could you describe how did the idea of storing water in ice stupas strike you?

Sonam Wangchuk: Ladakh is a cold high-altitude desert in the Great Himalayan mountain ranges where people especially the farmers face acute water shortages during the early crop-growing period between April and May. Global warming and shrinking glaciers has made things worse and has left little water available to farmers.

I truly believe that access to water in the desert landscapes around many high-altitude towns and villages of Ladakh could be improved if the huge seasonal outflows of glacial water could be frozen in a way that it melts gradually in spring to be available to the villagers when they need the water, the most.

I was inspired by the experimental work of a fellow Ladakhi engineer, 80 year old Aba Chewang Norphel. Aba Norphel had created flat ice fields at heights of 4,000 meters and above. But villagers were reluctant to climb that high to maintain them. It was a tantalizing situation: a logical water supply solution was available, but faced challenges.

So, I kept thinking about an alternative solution and finally succeeded in storing water way down [next to the villages]. I have designed them like the Tibetan religious stupas that dot the Himalayan landscape, as I believe that it gives a better sense of ownership for this concept among the local population.

How do you create the ice stupas and what material takes to make them? How long do they last?

The ice stupas are formed using glacial stream water carried down from higher ground through buried pipes whose final section rise vertically: due to the difference in height (i.e. gravity), pressure builds up in the pipe and the water passes along the pipe, flows up and out from its raised tip through a fountain into sub-zero air and then freezes as it falls to gradually form an ice cone or stupa. In late spring the melt water is collected in large tanks and then fed onto planted land using a drip-irrigation system.

In 2014, we had an encouraging sign: the seven-meter tall, first prototype ice stupa lasted well into summer, until May 18. I then invited His Holiness Drikung Kyabgon Chetsang Rinpoche and the monks of the nearby Phyang monastery, to bless the ice stupas and to adopt it to alleviate serious crop-water shortages. Together with the monastery we set up a crowdfunding campaign that paid for a 2.3 km pipeline system to bring glacial stream water down to the village; the resulting ice stupa grew to a height of 20 meters. In 2015, it lasted until early July, supplying 1 million liter of melt water to the 5,000 saplings planted by all the villagers and monks. As for material, it only takes lengths of good HDPE plastic pipes.

How many ice stupas have you created so far?

It is still in piloting phase. For three winters since 2013 we have created one big ice stupa of 65 feet height and five smaller ones of roughly 15 feet. We started piloting the idea of the ice stupa in the Phyang village for a real-life application. People of the village came and volunteered to plant 5,000 trees, which were supported in the lean months by the moisture from the ice stupa. The fact that the “ice stupa” artificial glacial experiment had the blessings of His Holiness Drikung Chetsang Rinpoche, one of the topmost leaders in Tibetan Buddhism after HH the Dalai Lama helped a lot to gain the confidence and support of the local population.

In how many villages you are going to create ice stupas? Any target?

As of now, all our experiments are in one big village called Phyang. We want to master this art here and then we hope to train young people from mountain countries of the world and launch ice entrepreneurs. It will then be up to them to create many.

Apart from agriculture, how else would these stupas benefit people?

Apart from [supplying] water to the farmers, in future ice stupas will host ice hotels inside them. These ice hotels will be a special experience for tourists and when they melt it will water for the farmers. A win-win situation.

Similarly, we are exploring ice climbing, ice skating, ice hockey and ice sculpture of the stupas in order to develop a new form of winter tourism in Ladakh.

How about the costs? And who funds these projects?

The cost depends on how much pipe you need. Depending upon location and usage it can cost between 10,000 rupees ($155) to 10 lakh rupees ($15,000). The recent project to build roughly 10 pilot ice stupas involved a 2.3 kilometer pipeline buried five feet underground. For this we raised roughly 75 lakh rupees ($115,653) through a global crowd funding campaign

Can the ice stupas be created in other regions also?

In the last three months, we have taken the ice stupa technology to Sikkim [a Himalayan state in northeastern India] on invitation of the state government to drain and refreeze a dangerous glacial lake that could otherwise cause Kedarnaath type flashfloods. Subsequently engineers and professionals from Sikkim have come to Ladakh to learn the technique. This was facilitated by the UNDP [United Nations Development Program].

We then took it to the Swiss Alps where we are currently building an ice stupa prototype at the invitation of the Swiss authorities, as a tourism attraction in the short term and a glacier enhancement measure for the long term.

I think artificial glaciers will be an occupation and enterprise of the future; fortunately or unfortunately.