In the summer of 2017, after a three-year voyage, spanning more than 40,000 nautical miles with stops in 23 countries and territories, the Hōkūleʻa — a giant Polynesian sailing canoe — returned home to the shores of Honolulu, Hawaii. Moments before her arrival, a misty rain — considered a Hawaiian blessing — fell, but the clouds parted as the 62-foot long vessel powered by two red sails glided into the harbor near Magic Island Beach in Oahu, surrounded by a flotilla of escort canoes, kayaks, and surfboards.

Photo by Photo by Polynesian Voyaging Society/Bryson Hoe The Hōkūleʻa stopped in 23 countries over the course of three years, passing along Polynesian sailing knowledge and advocating for a sustainable future.

Along the shoreline, tens of thousands of spectators gathered to cheer the Hōkūleʻa’s return, waving Hawaiian flags and snapping photos of the awe-inspiring canoe. As the crew disembarked, a group of Hawaiian men in traditional dress chanted and performed the ancient Hawaiian spear-throwing Kāli‘i Rite.

The purpose of this epic trip — decades in the making — was to pass along traditional Polynesian sailing and navigation knowledge to a younger generation and to bring attention to the idea of building a sustainable future for the Earth using local solutions that blend Indigenous wisdom with other best practices.

The Hōkūleʻa is a replica of an ancient Polynesian voyaging canoe. It has no motor and uses sails and a large paddle for steering, which requires several people to handle. The 62-feet-long and 20-feet-wide vessel was originally built in 1975 by founding members of the Polynesian Voyaging Society, a Hawaii-based group that seeks to perpetuate the art and science of traditional Polynesian voyaging, for a one-time voyage from Hawaii to Tahiti.

One motivation for that first trip was to show that Polynesians settled the Pacific islands through intentional voyaging and to counter the idea propagated by Norwegian Thor Heyerdahl of Kon Tiki fame that they descended from South Americans rather than Asians. 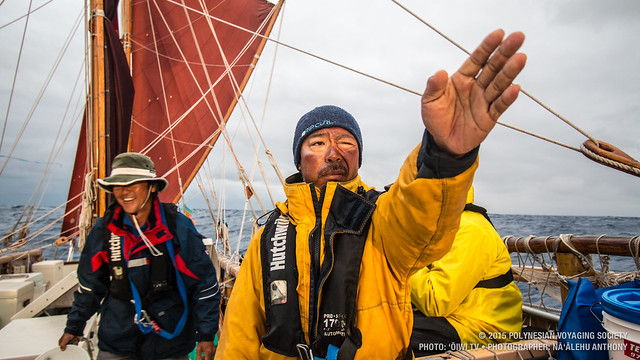 During that first voyage, the crew navigated without any handheld instruments — including watches — just as their ancestors did long ago. “Everything that you use to keep yourself oriented and on track is provided by nature,” Bruce Blakenfeld — one of the original voyagers and a captain on the latest voyage — explains. “So it’s all celestial objects — stars, planets, the moon and the sun, plus the wind and the clouds, the ocean swells and currents and the sea birds.”

Back in 1975, because it had been 600 years since a voyaging canoe had been used in Hawaii, there was no one alive who knew how to navigate using those ancient ways. Blakenfeld and the other original crew members eventually found a celestial navigator on Satawal, Federated States of Micronesia, who accompanied them to Tahiti and eventually trained them.

The purpose of this latest and much more ambitious voyage of the Hōkūleʻa and a sister ship, the Hikianalia, was to promote sustainability and indigenous knowledge of natural resource management. At each port, the crew — close to 300 who traded off on different legs of the voyage — were greeted by locals. Some of the highlights included meeting Archbishop Desmond Tutu and the Dalai Lama and being greeted by Penobscot Indians in traditional birchbark canoes off the coast of Maine.

“The original idea of Polynesian sailing canoes was to go into the unknown over the horizon and bring back knowledge — engineering, healing arts, whatever has value to enhance the survival and wellbeing of your community,” Blakenfeld says.

During their worldwide voyage, Hōkūleʻa crew members learned, for instance, that the state of Yap, within the Federated States of Micronesia, had decided to ban plastic bags, leading to the creation of several small businesses on the island that make hand-woven, reusable bags. Another time, they met with fishermen and children to talk about sea level rise on Tangier Island in Chesapeake Bay.

“We’re a global community, all facing this issue of global warming,” Blakenfeld says. “It impacts every single being, animal, human, and plant species. So we wanted to travel around the planet and find out what people are doing in their areas, what unique and brilliant things are out there that we can learn and share broadly.”

Training the Next Generation

In 2009, as members of the Polynesian Voyaging Society began discussing a worldwide journey, they decided that the vessel, now more than 30 years old, needed a complete overhaul. Blakenfeld oversaw that process which took years and required help from more than 300 volunteers.

The Hōkūleʻa was put together the “old way” with no nails, screws, or glue, with every piece of the ship being lashed together with about six miles worth of cordage. In addition, the masts and steering paddles were built by crew members. “We took her totally apart all the way down to just the hulls,” he says. “We put in all new lumber and materials and we used modern materials like foam cores and things like that.”

It wasn’t just the vessel that was refreshed. Much of the crew were younger Hawaiians who Blakenfeld was eager to mentor and pass along his navigation skills to.

One was Kaleo Wong, who was learning to navigate using the stars under the tutelage of Blakenfeld. “It’s a lot of practice and memorization because there are so many stars in the sky,” he says. “It’s hard work and the knowledge is sacred as well.”

Blakenfeld, who journeyed on about eight legs of the three year voyage, saw himself as a mentor to younger crew members such as Wong. “A big part of our role during this voyage was to teach them to carry on. We’re all getting older. This is the twilight of our sea time and we need pass along what we can to the next generation.”

After her return, the Hōkūleʻa and her crew didn’t spend much time in port. Just a few months later they were back sailing, this time on a 6-month voyage to 40 ports and nearly 80 communities through the Hawaiian Islands, sharing the adventures and lessons of their worldwide voyage.