Scientists have been monitoring seals and whales on Marion Island for nearly 40 years. Until last week, they thought Covid-19 was going to break their dataset.
Petro Kotzé

Though the coronavirus itself has not reached the Antarctic, the pandemic has not left this isolated region untouched. For researchers of the South African National Antarctic Programme (SANAP), the impact of the virus hits uncomfortably close to home.

“Nothing. Zero. No fieldwork of any kind.” That’s how much work the Marion Island Marine Mammal Programme (MIMMP) is currently conducting at Marion Island, according to Nico de Bruyn, a professor of zoology at the University of Pretoria and the project’s principle investigator. The MIMMP monitors southern elephant seals, sub-Antarctic and Antarctic fur seals, and killer whales from its land base on Marion Island, an isolated volcanic outcrop that juts from the harsh southern Indian Ocean halfway between Cape Town and Antarctica.

Not many can stand the conditions on Marion Island. The winds are said to be cold and brutal, and the rain hardly lets up. Yet for 365 days each year, for the past 39 years, scientists have ventured across the island to monitor the wildlife. The uninterrupted, long-term dataset is unique the world over, says de Bruyn. As top predators, the seals give researchers insight into what’s happening in the ocean and the atmosphere. In effect, these marine mammals provide exceptional insight into the rate and impacts of climate change.

It’s imperative, said de Bruyn, that data is collected this year. “Data like this is as scarce as chicken teeth,” he said.

Each April, new scientists make the imposing journey to Marion Island on South Africa’s research vessel, the SA Agulhas II, for a 13-month shift. This year, the scheduled annual relief voyage from Cape Town to Marion and back could not depart, as the country was in lockdown to curb the spread of the pandemic. After special permission from the government, the ship left Cape Town a few weeks later than the norm, with a reduced crew. Bettine van Vuuren, South Africa’s delegate for the Scientific Committee on Antarctic Research, says that they could send only a few essential staff and fetch those that just completed their 13 months on the island. “We are maintaining the base, but there is no science taking place,” she said in early July.

At the time, it seemed this research might remain on hold until the next relief voyage in March or April next year. Aside from the risk of Covid-19 infection to any outgoing expedition, there wasn’t any budget for an extra voyage this year outside of the funding already allocated, said Albi Modise, chief director of communications for South Africa’s Department of Environment, Forestry, and Fisheries, which is responsible for SANAP logistics and infrastructure.

With funding restrictions, and time running out, researchers at MIMMP have had to find creative ways to reach Marion Island by September for the elephant seals’ breeding season. Hope arrived from an unexpected direction.

De Bruyn said he has often before been approached by film crews requesting to visit Marion for its spectacular landscapes and the value of the work being done there. Rarely approved due to the sensitive environment and administrative difficulties, the looming crises placed just such a request in a new light. 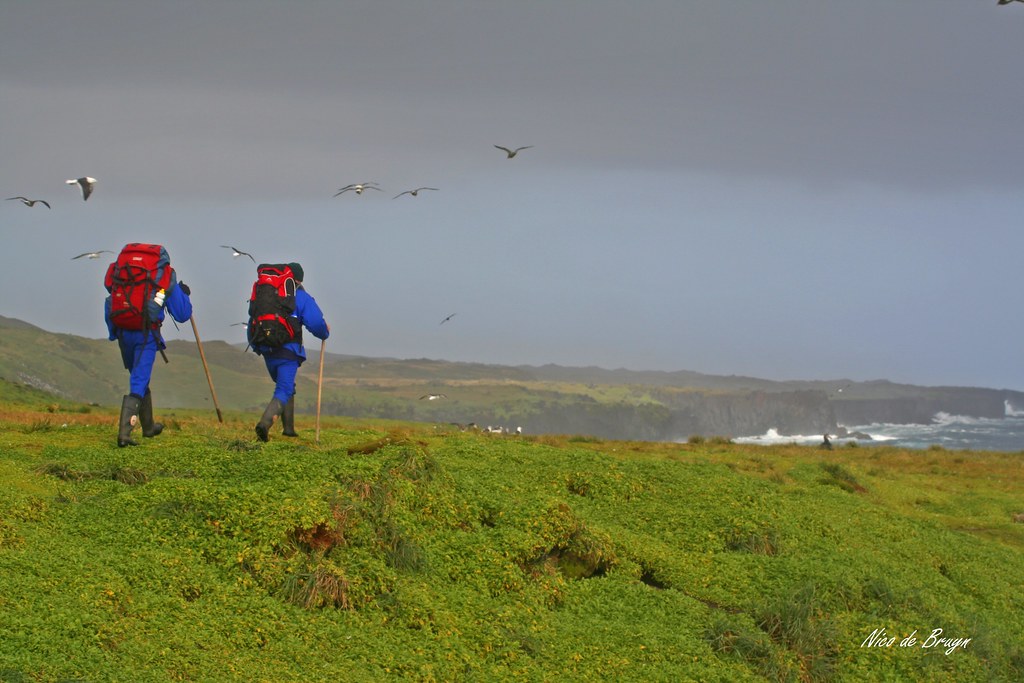 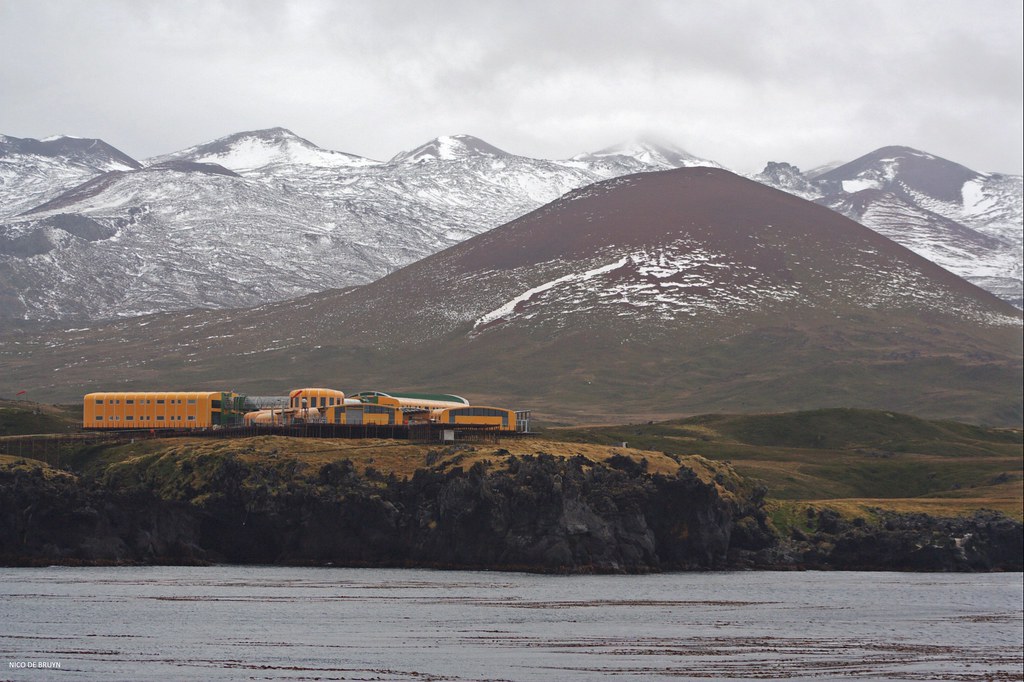 A small team is currently maintaining the base on Marion Island, but no research will take place until a new group of scientists arrive. Photo by Nico de Bruyn. 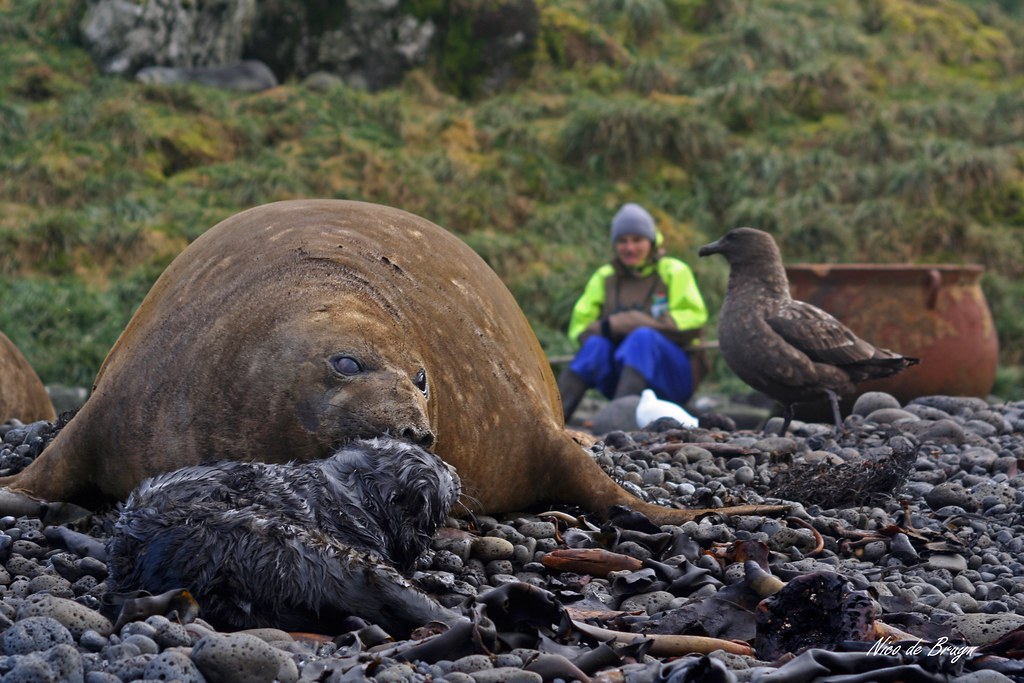 As top predators, seals give researchers insight into what’s happening in the ocean and the atmosphere. Photo by Nico de Bruyn.

When de Bruyn was approached by international filming company Plimsoll Productions to shoot part of an upcoming series at Marion Island, he decided to support the request as much as possible. Through perseverance, and diligent process, the crew’s formal permission from the government was signed and sealed last week. The production team will charter an Antarctic vessel for planned arrival at Marion by late September and, in addition to the boat and film crew, will keep space for seven researchers to “bum a lift” to the island for the remaining winter season. Among these will be scientists dedicated to keeping the 40-year MIMMP dataset going.

De Bruyn said that in addition to the scientists working on the seal and seabird projects, the seven-member strong research team will also include climate and plant specialist for separate studies.

While this is great news for MIMMP, the ramifications of Covid-19 extend much wider. Along with the United States, South Africa is one of the original 12 signatory states of the 1961 Antarctic Treaty (there are 54 states as of 2019) that sets aside Antarctica as a scientific preserve. Today, South Africa is one of the handful of countries that runs a large and diverse amount of research projects in the region. Under the umbrella of the SANAP, the South African program includes projects on oceans and marine ecosystems, earth systems observations, ecosystems, biodiversity and biodiscovery, innovation and development, and human enterprise.

Sarah Fawcett, a lecturer and oceanography researcher at the University of Cape Town, is lead investigator for a SANAP project that aims to understand how nutrient cycling in shallow Antarctic waters affects the amount of carbon removed from the atmosphere by the Southern Ocean. The relief voyages to Marion are the only opportunities to collect oceanographic data, says Fawcett, and are fundamental to oceanography. “At the moment the immediate implications are hard to evaluate,” she said. “The truth is that we don’t know yet.”

John Cooper is honorary information officer for the Agreement on the Conservation of Albatrosses and Petrels. He has orchestrated several of the ongoing bird studies at Marion Island, including the long-term monitoring of albatrosses, set up by Cooper in the 1980s. The current break in data gathering from the island is unprecedented, he says. The only other example that comes readily to mind is an assumed break in data collection during World War II when whaling in the Southern Ocean largely stopped, he says. With whaling paused, the collection of catch statistics, like numbers killed, their sizes and yield, would also have ground to a halt. “At Marion Island specifically, there have been no similar breaks in field data collection until this year that I can think of,” said Cooper.

There have been occasional shortages of field workers on the island due to medical emergencies or other reasons, says Cooper, but help from other research teams usually means that the minimum data required is still collected. “Such cooperation among field workers has always been a special part of conducting research on remote islands,” he said.

According to Fawcett, this collaborative spirit continues, though it’s limited. For example, a conversation has started among the Southern Ocean Observing System — an initiative that facilitates the collection and delivery of observations on the Southern Ocean’s dynamics — and its various regional groups on how nations can assist one another to plug in holes in data collection.

But away from the island and research vessel, the pandemic has had further ramifications. Van Vuuren explains that the impact on both students and project funding are substantial. New postgraduate students cannot start their projects without this field season, and those who need to complete their research before graduation have been left hanging. Furthermore, said Van Vuuren, projects funded through SANAP are at the end of their three-year funding cycle, and deliverables across the board are in jeopardy.

According to de Bruyn, though the team will have to work hard to make up for lost time when they get to Marion, their biggest fear has been absolved. One of the longest running unbroken data sets in the world on marine mammal life histories in the Antarctic is set to remain ticking nearly uninterrupted. A break in the data would not only have undermined the work of the past 39 years, but also its value for future research.

Van Vuuren says there is solace in the fact that the whole world has to cope with the pandemic’s disruptions. “We just have to be resilient,” she says. The proof that such perseverance can pay off, might just be found on Marion Island this September.

Freelance journalist and photographer Petro Kotzé specializes in water, conservation, and the science behind it. She is author of the book Water Resilient Cities and blogs on lessons from places familiar with drought at www.50litres.com.