Fifty years ago, the Committee to Save San Bruno Mountain stopped a plan to lop off half of San Bruno Mountain to fill the San Francisco Bay and expand Foster City. Today, local environmental activists have a new challenge: getting the California Bay Area to notice — and protect — the rare, 100,000-year-old sand dunes on the western slope of the mountain. 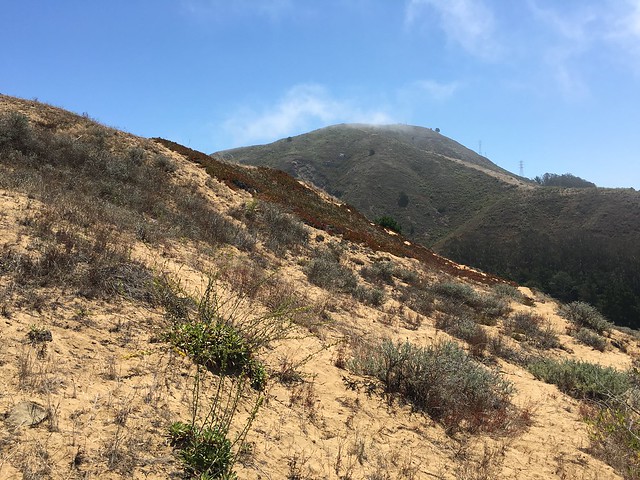 “Although people say San Bruno was ‘saved’ 40 years ago, the mountain is never completely safe,” Ariel Cherbowsky, stewardship coordinator of San Bruno Mountain Watch, explained one fine Saturday morning, during a one-mile interpretive walk in the dunes. The program, which also includes the option of ripping out invasive ice plants, began in May of this year.

These inland dunes were formed during an interglacial period in the Pleistocene era, some 80,000 to 125,000 years ago, when the northern San Francisco Peninsula was an island. Back then, water from melted glaciers made the sea level higher than today and over thousands of years, ocean waters deposited silt creating the sands of what’s called the Colma Formation. Deposits from shallow tidal lagoons and silt from valley slopes gave the sand here more soil-like properties and its characteristic iron-stained brownish coloring, unlike the whiter sands of the coastal dunes. The older dunes are more efficient at retaining water and nutrients and are home to several rare and endangered plants.

In 2015, San Bruno Mountain Watch helped preserve part of the sand dunes, about 3.25 acres, after a local landowner donated it to San Mateo County. That land was annexed into the local state-county park. But the best way for the dunes to gain notoriety — and further protection — may be through its tiny star, the rare San Francisco Lessingia flower. The flower is found in only two places in the entire world: the dunes our group of 12 walks over and the dunes of the Presidio in San Francisco.

Even with flags marking their presence, it’s hard to notice the yellow flowers, which were listed as a federal endangered species in 1997. Using magnifying glasses for a closer look, or smartphone macro lenses for close-up pictures, the delicate beauty of the flowers becomes clear. 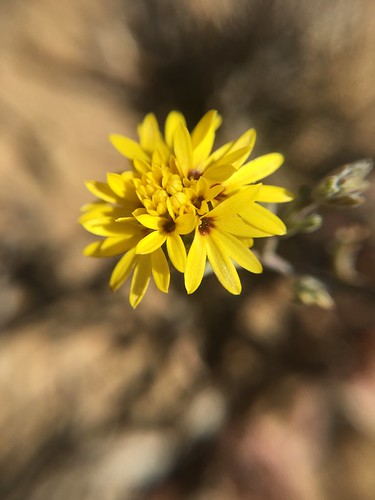 Photo by Tom Molanphy San Francisco Lessingia flowers are only found in the world: the
Daly City dunes and the San Francisco Presidio dunes.

Cherbowsky’s lecture indicates that San Francisco’s history was as much about getting rid of sand as it was about finding gold. Late nineteenth- and early twentieth-century developers quickly decided the sand dunes that covered most of today’s San Francisco were worthless — even though early paintings of the dunes reveal a lush plant life of green salvia, blue lupine, and yellow poppies. The infamous “Elephant,” the West Coast’s first steam shovel, made quick work of the thriving ecosystem by scooping up dune after dune to fill the Bay for more buildings. Cherbowsky shows us the numerous Monterrey pines that were planted in their place.

It doesn’t take long to realize that even this small ecosystem is complicated — a push and pull between plants, animals, insects, bacteria, sand, and, most importantly, humans. Cherbowsky points out a brown pile of pulled crown daisies, prized by many cultures in salads, but which is invasive here. Crown daisies are tall and strong and they crowd out the much smaller Lessingia. Mountain Watch made the decision to pull out the invasive plant after much deliberation.

The trail dips down into a small canyon, called Pipevine, named after the striking black and blue Pipevine Swallowtail butterfly that glides through in springtime. Cherbowsky draws our attention to some pink Davy’s clarkias, another native plant fighting to make a comeback.

Although we started in warm sun, the fog is creeping in, pushing a cool wind before it, a reminder that this is a temperamental area, especially if you’re a delicate flower trying to make a living in nutrient-poor sand. It’s a hard and fast existence here.

Cherbowsky asks us to stop and consider the sand.

“From the highway, this looks just like any other brown patch on the mountain. You have to take the time to look at it closely, to notice how it ripples like water, and then to wonder about how each grain crumbled from something in its own way.”

His message is clear: If we don’t protect these dunes, they could soon be gone. Development plans are lined up, including a new ballfield and up to 25 parking spots, which would fragment the dunes and make much of the remaining area vulnerable to habitat destruction. And there will be more than just one “Elephant” on the job this time.

“We need to make the mountain more accessible, make people more aware how unique it is,” he says. “Maybe if you know a flower is found only here, you might not blast a roman candle on top of it.”

Cherbowsky offers a history lesson on the 2012 landslide that left cars parked below the dunes well past their hubcaps in mucky sand.

“All the news about the slide concerned home damage or car damage or lost dogs, which is understandable. But I couldn’t find one report on the enormous field of SF Lessingia that was wiped out by the slide, right where we’re standing.”

We use a carpet of squishy ice plant as footing to finish the mile loop, pausing near the site of an Ohlone shellmound that was only discovered because a plant survey had been conducted in the area. Mountain Watch is desperate to expand protection to include this sacred and historical site.

Three red-tail hawks blast out of a eucalyptus grove with a scream. They’re a reminder of the broader and impressive ecosystem of San Bruno Mountain that the dunes are a part of, one of the largest urban open spaces in the country and home to 13 rare and endangered plants, and three endangered butterflies.

“Tell your friends about the Daly City Sand Dunes,” Cherbowsky urges us.

We finish our walk through the dunes in silence. The question remains if these sand dunes will be around for another generation.