An Unhappy Birthday for the 1872 Mining Law

Some things, like the US Constitution, embody timeless principles. The General Mining Law of 1872, which celebrated its 114th birthday on May 10, is not one of those things. Instead it is a hurtful and embarrassing reminder of the worst of nineteenth-century thinking.

Hurtful because this antiquated law is harming our communities and the environment to this day. Embarrassing because it is still the law of the land for hardrock mining. 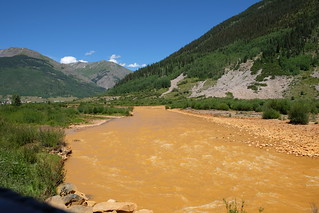 Photo by Mor/FlickrBecause how the mining law is framed, Gold King mine isn’t being held responsible for last year’s Animas River acid mine drainage disaster. It’s the American taxpayer who has to pay for the clean up.

Signed into law by President Ulysses S. Grant before Custer’s Last Stand, the 1872 mining law was intended to do two things:

If you wonder whether the federal government can succeed at anything it intends to do (and you discount the moon landing, the interstate highway system, Social Security, etc.), wonder no more. The General Mining Law of 1872 gloriously achieved its intended goals by:

Giving away more than $300 billion in publicly owned gold, copper and other metals, and;
Selling (known under the law as “patenting”), for no more than $5 per acre, mineral-bearing publicly owned lands equal in area to the state of Connecticut.

Although there is a temporary patenting moratorium in place that must be annually renewed by Congress, the Mining Law to this day allows companies to buy mineral-bearing public lands for no more than $5 per acre — nineteenth century prices— and to extract hard-rock minerals like gold, silver, and uranium from public lands without making royalty payments to the taxpayer (unlike other extractive industries like coal, oil or natural gas).

And, to this day, under the mining law anyone with a hard-rock mining claim has “the right to mine” that trumps all other potential uses of public land. Over the years, in challenges to mining permits, the courts have repeatedly said that the 1872 General Mining Law makes hardrock mining the highest and best use of the public land not explicitly reserved for another purpose.

The financial impacts of this law are egregious, but the environmental damage it causes is far worse.

Hardrock mining has been a major industry in the United States for more than a century, and much of the American West’s heritage was fundamentally shaped by those early pioneer miners. Nineteenth-century Americans didn’t think of the environment as something to be protected as much as something to be “tamed” and “used”. Consequently, the mining law contains no environmental provisions.

As a result, hundreds of thousands of mines were built across the American landscape, some of which were quite large for the time. They were built however possible regardless of impacts, and wastes were often dumped directly into creeks.

Until 1980 there was no federal regulation of the environmental impacts of hardrock mining. Since 1980, minimal regulations have been introduced but they do not address the fundamental problems with the mining law.

The consequences of giving the mining industry free rein for 108 years (and arguably up to present day)?

The Environmental Protection Agency estimates that 40 percent of the headwaters of western watersheds are polluted by mining.

500,000+ inactive and abandoned mines litter the country, the cleanup of which will cost $50 billion (or more).

Some of these mines turn into disasters, like the Gold King mine, which famously turned the Animas River, which is part of the Colorado River watershed, orange with mine waste last summer.

Known problem mines like Gold King still cause problems today because — unlike the law governing coal mining — the 1872 General Mining Law doesn’t charge the hardrock mining industry a reclamation fee to clean them up.

So even though EPA, the state of Colorado, and the nearby community knew that acid mine drainage from Gold King was a huge problem threatening the main economic engine of the region — the Animas River — nothing was done until the problem became critical. Why? Because there wasn’t any money to fix it.

And when you’re in crisis mode, mistakes are more likely to happen, as it did last August when the Environmental Protection Agency finally began working to plug the mine. While at work, the EPA crew accidentally breached a debris wall holding back a pool of wastewater, and three million gallons of acidic, heavy metal-laden water came pouring out at once, turning the clear waters of the Animas deep orange for roughly 60 miles.

While the EPA crew caused the accident, they were after all working to fix a problem that wouldn’t have existed in the first place but for the mine. Yet, because how the mining law is framed, Gold King isn’t being held responsible for this disaster. It’s the American taxpayer who has to pay for the clean up.

Clearly, the 1872 General Mining Law needs to be updated. The good news is we know how to fix it. Senators Udall, Bennet, Heinrich, and Wyden have introduced a bill that would charge a fair royalty for public minerals and require industry to pay a reclamation fee just like the coal mining industry does. That way legacy mines like Gold King could be much more easily cleaned up.

Reforming this outdated and inadequate mining law would be a heck of a birthday present.