An Endangered Fish Out of Water

A unique hatchery program is keeping the Rio Grande's silvery minnow alive. But the long-term fate of this tiny fish is uncertain.
Bud Russo

When irrigation was introduced to New Mexico, principally by the Spanish four centuries ago, the Rio Grande began its long decline from a wild, free-flowing river to a channeled ditch delivering water from its headwaters in the San Juan Mountains in southern Colorado to the Gulf of Mexico nearly 1,900 miles away. Dam and water diversion projects built by conservation district personnel, the US Army Corp of Engineers, and the Bureau of Land Management, which manage the river, have inadvertently endangered a number of species—among them, the diminutive Rio Grande silvery minnow (Hybognathus amarus). 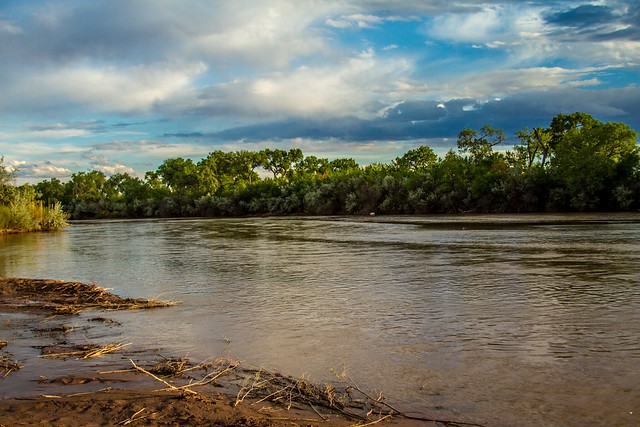 Photo by I am New Mexico/Flickr The minnow survives only in about 5 percent of its historic range, in a 174-mile stretch of the middle Rio Grande (pictured above), often called the Albuquerque stretch, which also happens to be the most densely populated region of New Mexico.

The two-inch silvery minnow once occupied 2,400 miles of the Rio Grande and the Peco River, one of its major tributaries. Now the minnow survives only in about 5 percent of its historic range, between the Cochiti Dam in the north and the headwaters of Elephant Butte Reservoir — a 174-mile stretch of the middle Rio Grande, often called the Albuquerque stretch, which also happens to be the most densely populated region of New Mexico where more than half of its citizens live.

The silvery minnow was listed as endangered under the Endangered Species Act in 1994, around the time when this stretch of the river began to regularly dry each summer when farmers diverted the water for irrigation into canals and ditches and onto alfalfa fields and pecan orchards, leaving the fish out of water. The plight of the minnow set off a legal battle between irrigators represented by the Middle Rio Grande Conservation District and environmental groups attempting to preserve habitat for the fish. 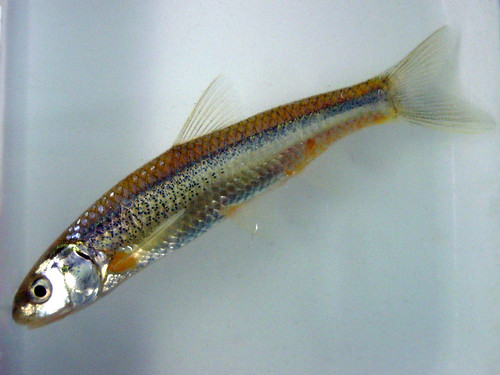 Photo by Joel Deluxe There is a growing understanding that like the proverbial canary in the coal mine,the silvery minnow
in the Rio Grande is not only a bellwether of the health of the river and its ecosystem, its fate
is also a harbinger of what people might face as as our freshwater sources become more scarce.

Nine years later, in 2003 the US Fish and Wildlife Service issued its biological opinion, which basically stated that water mangers would have to keep a small amount of water moving in the Albuquerque stretch of the Rio Grande so that it doesn’t dry in the summer heat.

Farmers and ranchers once considered themselves the principal stakeholders of the Rio Grande. But attitudes evolved, especially with the growth of urban centers inhabited by educated professionals who consider the river to have intrinsic value beyond its so-called beneficial uses for humans. There is a growing understanding that like the proverbial canary in the coal mine, the silvery minnow in the Rio Grande is not only a bellwether of the health of the river and its ecosystem, its fate is also a harbinger of what people might face in the future as our freshwater sources become more and more scarce.

Like many Western rivers, the Rio Grande’s natural flow is highly variable, sometimes flooding, other times leaving a dry riverbed. “While species have adapted and even prospered in highly variable streams, human water supply demand lacks this flexibility,” writes attorney Charles DuMars in his essay, “The Middle Rio Grande Minnow Wars” in the 2012 book One Hundred Years of Water Wars in New Mexico. “Water flowing past a city or farm in April is of no value to that entity in July. Balancing flows may make for reliable human supply, but it directly affects the viability of species relying on historic variation.”

Environmental groups, such as Defenders of Wildlife, the Sierra Club, WildEarth Guardians, and Southwest Environmental Center argued, the silvery minnow’s survival would require a more natural state of water flow. As DuMars put it, however, every drop taken for the minnow meant a reduction in water for irrigators and consumers because the Middle Rio Grande is a fully appropriated stream.

The outcome of the contentious litigation was favorable not only to the fish but to the river itself — and did not appreciably impact farmers and consumers. In summary, a certain amount of water was allowed to flow year around. Meanwhile, the Middle Grande River Conservation District adopted stricter conservation measures and municipal water utilities repaired city water pipes (therefore lessening waste). Both stakeholders pumped aquifers that didn’t affect river volume to make up for losses. Moreover, levies were moved farther back from the riverbed, allowing the river to form braided streams. Cottonwoods and other riparian plants were allowed to grow more densely, providing shade and food for fish.

These measures helped somewhat, and the silvery minnow has survived thus far, but its population has not appreciably prospered; the remaining Rio Grande habitat is just too small for the fish to flourish on their own. Enter, the Los Lunas Silvery Minnow Refugium, established by the New Mexico Interstate Stream Commission at Los Lunas, 25 miles south of Albuquerque.

“The refugium is a fish hatchery,” says Dr. Alison Hutson,environmental scientist and assistant manager, “but unlike any hatchery you’ve ever seen.”

In its park-like setting, the refugium features a 458-foot-long serpentine concrete channel, ponds, shelves, backwaters, and a floodplain that, taken together, simulate the flow of the Rio Grande. Landscaped with native plants growing on the river’s banks, the project was designed and constructed at a cost of $1.7 million to spawn and propagate the endangered silvery minnow.

“The refugium was required by the Fish and Wildlife Service’s 2003 Biological Opinion,” manager Douglas Tave explains, but “the term ‘refugium’ was not defined. It was kind of an invented word, and no one knew what it entailed.”

Traditional hatcheries coddle brood stock in aquaria and tanks until females lay eggs and maintain the environment until eggs hatch. Fry are then raised until they reach a prescribed length and weight before being released into lakes and streams. In most cases, fry are not there very long before commercial and recreational fishermen and fisherwomen pull them out of the water.

“What we’re doing is conservation aquaculture,” Tave continues, noting that preserving an endangered species requires a different tack. Hutson adds, “We’re trying to put a farmed animal into the wild, and we asked if there’s a better way of doing this. The refugium allows us to produce fish that are more wild so when they’re stocked in the river, the species has a better chance of recovering.”

Because the Rio Grande is fully appropriated for beneficial use, scientists had to apply to the Office of the State Engineer to acquire rights for the nearly 161,000 gallons of river water that flows through and is recycled at the refugium. The only “new” water added is that which replaces river water lost to evaporation.

But the refugium is much more than just water modeling the Rio Grande. As Hutson emphasized, the goal of the project is to raise wild fish. In this replication of the silvery minnow’s natural habitat, the minnows are allowed to fend for themselves. Staff members add fertilizer to water at the exit sump, where it can blend in thoroughly as the water is recirculated back to the inlet. The fertilizer facilitates growth of freshwater algae, diatoms, zooplankton, and animals that cling to plants. These life forms constitute the primary food source for the minnows, which are left to their own devices to forage.

Fry are introduced to the refugium in May. The exact number of fry varies, as does their age and size — all factors which contribute to their survivability. The older and larger the fry, the more likely fish will survive until the harvest in October.

“Hopefully, the refugium will enable the fish to develop wild-type behaviors and will also prevent the development of maladaptive hatchery-induced behaviors,” Tave and Hutson wrote in a paper for World Aquaculture.

At the end of the season, sand bags and other obstacles are removed and the refugium is seined. Staff members capture and tag every minnow with a unique tattoo, and measure and weigh a subsample to determine average length and weight. The fish are held temporarily in tanks until Fish and Wildlife staff transport them to stock the Middle Rio Grande and an experimental stretch of the river near Big Bend, Texas.

Photo by Bud Russo Dr. Alison Hutson explains the conservation aquaculture principles used at the facility. Tanks of fry are allowed to grow to preferred size and weight before being introduced to the refugium.

The refugium is, however, a stopgap measure to keep this short-lived fish from becoming extinct. Without it and the relocation program, the minnow would have probably vanished by now. And even now, its fate hangs on balance. As USFWS biologist Thomas Archdeacon told Water Deeply last year: “Basically two bad years in a row will essentially wipe it out, and we’ll be relying almost entirely on that hatchery safety net.”

Yet, in 2016, after 15 years of requiring water managers to keep at least 100 cubic feet per second of water in the Albuquerque stretch of the river, USFWS issued another biological opinion that basically said that water management operations on the Rio Grande were no longer jeopardizing the silvery minnow and stopped requiring flow minimums.

According to David Campbell, the USFWS branch chief who oversees the river recovery project, “Now there are no flow requirements at all.” Instead the new biological opinion calls for water managers — the US Bureau of Reclamation and its partners — to manage the river in other ways, such a building fish passages around dams. Campbell also explains, if the river dries, surviving silvery minnows can be rescued from puddles and, if fish densities are too low, they will continue to be supplemented with fish raised in the refugium, without which this rare fish inevitably will become extinct.

Only by managing the Rio Grande as the complex, integrated ecosystem that it is, and not viewing it simply as a water-delivery ditch; only by considering the river as a legal entity — just like the farmer, industrialist, and consumer — will the silvery minnow, and other wildlife that depend on it, like the endangered southwestern willow flycatcher, the yellow-billed cuckoo, and even the iconic cottonwoods, have a chance survive.