An Economist with an Abiding Commitment to Making the World Better

In the autumn of 1969 there was a big environmental conference in San Francisco sponsored, if memory serves, by one of the United Nations agencies. A panel at the conference featured high school students who were active in various environmental activities. One was a lad from Cubberly High School in Palo Alto named Jim Harding. After the panel, Harding met David Brower, who had recently been forced out of the Sierra Club and founded Friends of the Earth. Each impressed the other. 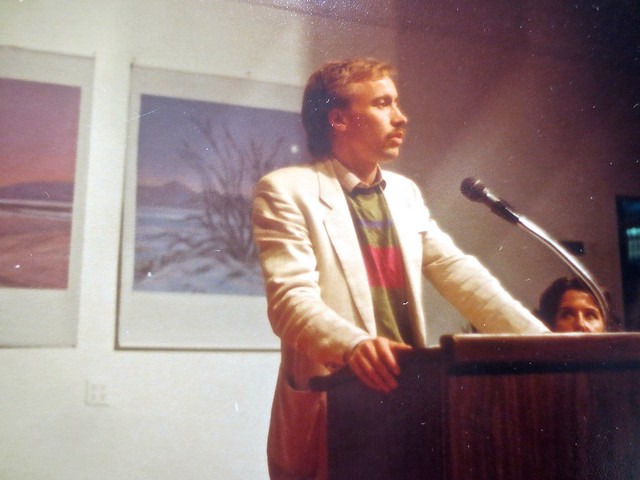 Photo courtesy of David Chatfield Jim Harding at a talk in 1982. Harding was a key player in energy planning everywhere. The recent decision by the Pacific Gas and Electric Company to phase out its last reactor, at Diablo Canyon is a fitting capstone to his decades of activism against nuclear energy.

After high school Harding enrolled at Bowdoin College in Maine, where he studied economics and became interested in the economics of energy production, especially nuclear power. In due course he made it back to the Bay Area and joined the staff of FOE, which was actively campaigning to have nuclear reactors shut down.

As the campaign grew, Harding undertook a column in FOE’s journal Not Man Apart, a twice-monthly, two-page tabloid-newspaper spread called “The Nuclear Blowdown.” It covered economic matters as well as technical issues to do with reactor safety and many other topics. Despite NMA’s relatively small circulation, “The Blowdown” became required reading, both for nuclear boosters and for opponents. At one point, Mark Dowie wrote in Mother Jones that he had snuck into a high-level nuclear meeting and heard any number of people say that they depended on “The Blowdown” to keep them up to date on what the antinuclear movement was thinking and doing.

In 1976, as California voters were considering how to vote on Proposition 15, which would have severely cramped any thought of nuclear expansion, Harding was lured to Sacramento to work for the new California Energy Commission, one of several agencies created during Jerry Brown’s first stint as governor, two others being SolarCal and the Office of Appropriate Technology.

After about three years in state government, Harding returned to FOE and joined Amory Lovins to create the International Project on Soft Energy Paths, “soft” energy being Amory’s description of solar, wind, other renewables, and efficiency and conservation. They published an elegant journal called Soft Energy Notes, which became quite an influential fixture, and conducted research and sponsored conferences for about five years.

Nuclear energy was a hot topic in California in the ‘70s and ‘80. The state then had reactors operating at Humboldt Bay, San Onofre, Diablo Canyon, and Rancho Seco. When the Sacramento Municipal Utility District suggested building a second reactor at Rancho Seco, Harding produced a devastating economic analysis that stopped the proposal in its tracks.

In late 1985 Friends of the Earth imploded and the entire San Francisco operation was shuttered. Harding worked for several years at MHB Technical Associates, a firm run by three nuclear engineers who left General Electric to campaign against nuclear power. Harding testified all across the country and the world at various hearings considering matters nuclear. He then moved north, working first for the Washington State Energy Office, then the Northwest Power Planning Council, and finally Seattle City Light. Later he set up his own consultancy.

Denis Hayes of the Bullitt Foundation and head of the Solar Energy Research Institute under Jimmy Carter, reports, “he was deeply involved in a Keystone Institute project to assess the economic viability of the current generation of nuclear reactors in an era of rising commodity prices (steel, concrete, etc.). Jim basically outworked everyone else and managed to move a diverse group to adopt a very skeptical final report. He was particularly upset by the phony baloney accounting that the French were using [see below] to hide massive expenses to justify their all-in commitment. . . . He was a smart, engaged guy who worked hard and cared deeply.”

In short, Harding was a key player in energy planning everywhere. The recent decision by the Pacific Gas and Electric Company to phase out its last reactor, at Diablo Canyon, negotiated by S. David Freeman for Friends of the Earth, is a fitting capstone to this effort.

Harding died on November 14, having had a brutal and relentless series of setbacks starting about 10 years previously. He was 64 years old. He is survived by one sister, Ann, and one brother, Rob.

Here is a sampling of what some of his friends and colleagues wrote for the Harding family to share at a private memorial service on Thanksgiving.

“As the other one of Dave Brower’s original energy protégés at Friends of the Earth, I had the special pleasure of working with Jim on many analyses and writings over decades, chiefly on nuclear power. He had faith, hope, and clarity, and the greatest of these is clarity.

An economist for whom economics was a powerful tool rather than a brain disease, Jim was blessed with an excellent mind, a sharp pen, a keen wit, low tolerance for lies and cant, and an abiding commitment to making the world better. And he knew well, as Joseph Wood Krutch said, that “The wicked flee where no man pursueth, but they make better time when someone is after them.”

“My earliest clear memory of Jim was, I believe, 1975, at the American Nuclear Society/Atomic Industrial Forum conference in San Francisco. Friends of the Earth held a press conference to launch a new publication, Jim´s analysis of the economics of the proposed Rancho Seco 2. Jim was, what? 20 years old? [23, actually] in front of a room packed to bursting with nuclear heavies at the height of their pomp. Jim was debonair and effortlessly confident as he presented his devastating demolition job on this California nuclear flagship. When he finished by announcing that copies of the analysis were available from the platform, the entire room surged forward as one. I´d never seen anything like it. It was the beginning of a remarkable career. That´s how I´ll remember my longtime friend and colleague Jim, as one of the doughtiest bravura fighters in a long David-Goliath battle that David is clearly winning. “

“I was active in the NW energy community when Jim arrived in Olympia, and we shared many hours together plotting the demise of the WPPSS [Washington Public Power Supply System, sometimes pronounced “woops”] nuclear plants. Five were started, and only one was finished, so we batted .800, which should get both of us into the Hall of Fame.

He had to be a little careful, as he worked for a governor who was allied with the construction unions, which thought these were terrific projects. Being careful was not really Jim’s strong suit. I was self-employed doing consulting for consumer and environmental clients, and could be more brash. He fed me a lot of good stuff. It helped both of us — he knew that what he knew was being used effectively, and I looked really smart.”

“I worked with him at Friends of the Earth in the early ‘70s, yet 40 years later I can conjure up that smile, like he knew some grand secret, and that extraordinary mind that leapt and focused and could light up. “

“He welcomed me when David Brower brought me to Friends of the Earth to write about the Diablo Canyon nuclear power plant. Jim welcomed me and nurtured me in my writings. Jim bought me meals when my own funds were lacking and welcomed me into his home. I value the time that I spent with Jim. “

“I have wonderful humorous memories of his Danish parodies (I share this link) as well as a memory of spending an afternoon trying to translate into English endless data on France’s sly manipulation of the facts behind its buildup of nuclear power plants. Jim was so intelligent yet patient with me and my efforts to translate something I didn’t understand (nuclear power). May his family be proud of him! “

“What a sad piece of news. I think often about how far ahead of the curve FOE was on energy policy, and Jim was one of the key people figuring it out. “

“I worked with Jim at Friends of the Earth in the early 1980s, and for part of that time, Jim and I were housemates. Jim’s intellect, wit, and unpredictable sense of humor were extraordinary and remain unmatched in my experience. Among other things, he introduced me to the magic of chocolate with chicken; the novels of John Le Carre, and the music of Leonard Cohen. I have always, and will always, think of Jim when listening to Cohen’s music. I’m very grateful for that.”

“Juliette forwarded me the hard news about Jim. I also worked at Friends of the Earth. In fact, the three of us spent a lot of time together when they were housemates. Before then, I was pretty intimidated by Jim’s cool intellect and analytical capabilities. His extraordinary work appeared effortless and his ability to challenge the nuclear establishment (in person and in writing) earned him a great deal of respect on both sides of the fence. In the office he was so buttoned up and focused on his work, I actually dreaded going to his house for dinner the first time.

But the Jim who greeted me at the door, grinning ear to ear, a gravy-stained dish towel on his shoulder and Miles Davis on the stereo, was not what I expected. Neither was the lovely aroma of something amazing in the oven. Work/politics never came up that evening or any other. Our time with Jim was often filled with bouts of extreme laughter over all kinds of silliness. We went to foreign films that we didn’t get. We fell through sinkholes in the mud around Pyramid Lake. I think what he loved best was to shock us with gossip about the lofty characters in the environmental movement. He’d tell their most off-color secrets and laugh and laugh watching us freak out at the info. He also loved being teased. We could not embarrass that man no matter how hard we tried. He really cracked me up. “