Americans Are Paying Attention to Food Waste, But Still Throw Away More Food Than They Think

We all throw away food. In fact, in the United States, an estimated 40 percent of all food is trashed as it makes it way from farm to table, or more aptly, as it doesn’t. But how aware are we of our own waste? And what motivates us to rethink our shopping habits or reconsider that wilting lettuce in the back of the fridge? 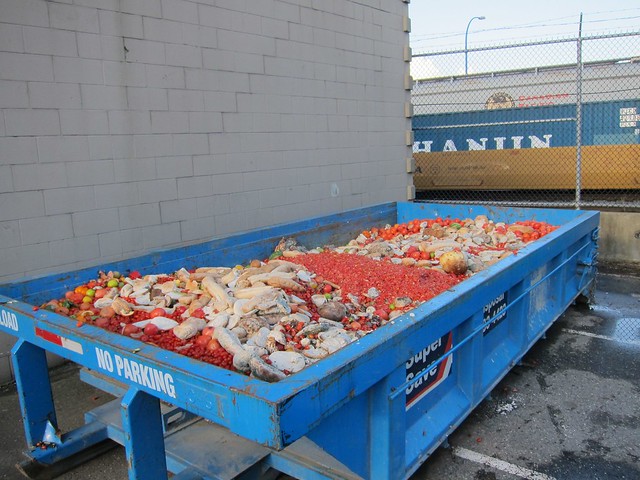 Nearly three-quarters of the 1,010 survey respondents said they waste less food than the average American. Photo by Stephen Rees.

Those are the questions a team of researchers at Johns Hopkins University set out to answer in the first national consumer food waste survey conducted in the United States. The results were published this month in PLOS ONE. It turns out that a lot of us are giving ourselves more credit than we probably deserve. In fact, nearly three-quarters of the 1,010 survey respondents said they waste less food than the average American. What is more, 13 percent of respondents indicated that they don’t discard any food and 56 percent estimated that they discard only 10 percent of their food, though the estimated average food waste for consumers is around 25 percent.

Researchers also looked at consumer motivations for reducing food waste, including considerations like saving money, setting an example for children, guilt about waste, thinking about those who are hungry, and environmental concerns. Perhaps expectedly, saving money came first. Among parents, setting a good example for children. Concern about the environmental — including greenhouse gas emissions, water use, and energy associated with food waste — was ranked last by respondents.

“From an environmental perspective, one thing that was very striking was that we asked people what is their top motivation for reducing waste, and environmental issues came out dead last on that list,” says Roni Neff, assistant professor at Johns Hopkins Bloomberg School of Public Health and one of the authors of the article. Neff noted that this outcome could mean one of two things: people just aren’t that aware of the environmental footprint of their food, or environmental impacts aren’t a big motivator for those considering food waste.

JoAnne Berkenkamp, senior advocate for the food and agriculture program at the Natural Resources Defense Council, wasn’t quite as surprised. “[F]or most of us, we go to the grocery store, the food is there, we don’t really know where it comes from. We don’t see the labor, and the water, and the agricultural chemicals, and the energy that went into growing it, and transporting it, and getting it to our doors,” she says. “The fact that people don’t connect with the environmental aspects of food waste is reflective of the fact that most of us really don’t see where our food is coming from in the first place.”

Given the huge impact our food system — and our food waste — has on the environment, the disconnect is unsettling. In North America and Oceana, food waste accounts for 31 percent of all cropland use, 30 percent of fertilizer usage, and 2 percent of greenhouse gas emissions. What is more, in the United States, 25 percent of all freshwater use can be traced to trashed (or composted) food, a scary amount considering the West’s historic drought, and nearly 25 percent of all methane emissions can be attributed to food rotting in landfills.

From an economic perspective, the value of wasted food in the United States has been estimated at $165 billion per year.

The most common reasons given for discarding food were concern about foodborne illness and a desire to eat only the freshest foods. “On the food safety side, people may be getting some misinformation or just needing more information about when food actually is safe and how to store it so it will last longer,” says Neff. “And on the food freshness side, I feel like we as a field may have been perhaps over-promoting this idea of freshness with the idea that people will only eat healthy food if they think it’s really fresh and beautiful.”

Luckily, the survey results weren’t all doom and gloom. On the positive side, it looks like Americans are starting to tune in to their food habits and food waste. Forty-two percent of respondents indicated they had come across information about food waste in the past year, and 16 percent said they had actually sought out this information. Just over half indicated that discarding food “bothered them a lot,” and nearly 90 percent of respondents indicated that they were either “very interested” or “fairly or somewhat interested” in taking action to reduce the amount of food discarded.

Neff takes all of this as a good sign. “The findings really suggest that people are sort of primed and ready for action,” she says. Noting that most people just don’t know how much food we are throwing away, she adds, “There is an opportunity to really increase the amount that we avoid wasting by just tuning in and becoming more aware.”

Of course, the question is how to do this. Many of the organizations working to reduce food waste approach the issue from an environmental perspective. The study found that may not be the best angle, and Neff suggests that advocates may be “more effective leading with other issues.”

Berkenkamp agrees. She also thinks that motivation to set a good example for children could offer a valuable and untapped approach. (This survey was among the first to ask respondents about children as motivators.) “I was quite surprised by the finding that the issue of setting a good example for children was a major motivator for the parents that were surveyed,” she says. “And I think that gives us some new ideas about the importance of working through children and working with their parents to leverage the fact that parents do care about the example they set for their children as it relates to food waste. That might be a leverage point that hasn’t really been utilized very fully to date.”

Although consumers account for a significant amount of wasted food, the authors were careful to note that “shame and blame can be counterproductive” and “consumer education and behavior change interventions must be complemented by approaches making use of entrepreneurial, policy, economic” and other tools, including changes to food labeling systems.

Berkenkamp agrees. “I think this survey, this data really substantiates the need both for education and awareness raising among the public, but also recognition that this is really a systems level challenge that we are facing,” she says. “We need policy change, we need the food industry to engage, we need to look at this broadly so that it’s easier for people to waste less food.”

To learn more about food waste, check out Food Shift, a project of Earth Island Institute.