Government has been slow to take action in one of the world's most polluted cities, say advocates
Slok Gyawali

Nepal’s image as an unadulterated tourist destination — with its pristine mountains, snow covered peaks, and bright blue skies — is in jeopardy. Life in the country’s capital city doesn’t align with this immaculate representation. For years, Kathmandu’s rapidly growing population has struggled with increasing air pollution and the associated impacts on health.

At the same time, the government has struggled to monitor air quality in the city. In 2007, the last air monitoring station in Kathmandu broke due to lack of proper maintenance, effectively ending the city’s monitoring program. The program wasn’t replaced until August of this year, when Nepal’s Department of Environment installed three new air monitoring stations across the city. 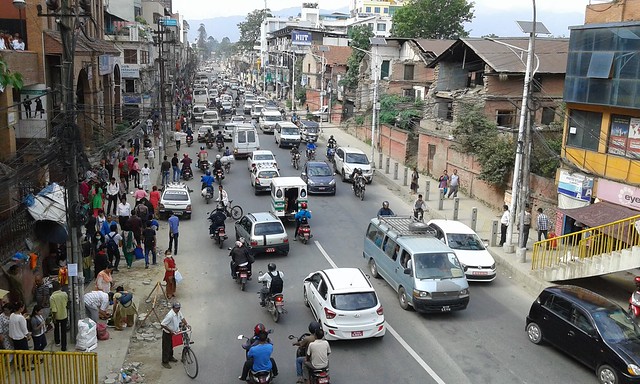 Photo by Slok Gyawali Increasing traffic is a primary contributor to poor air quality in Kathmandu.

The results from the new monitoring stations were disappointing but not surprising. Measures of both PM2.5 and PM 10 were significantly higher than standards set by the national government, recording PM 10 levels as high as 188 micrograms per cubic meter (µg/m3) and PM 2.5 as high as 125 µg/m3 in central Kathmandu. Nepal’s National Ambient Air Quality Standards set limits at 120µg/m3 for PM 10 and 40µg/m3 for PM 2.5.

These results are concerning, but findings from other surveys are even worse. For example, in 2014, The Kathmandu Post reported data from the 2014 Yale Environmental Performance Index, which indicated PM 2.5 levels in Kathmandu measured above 500 micrograms per cubic meter, 20 times higher than the World Health Organization’s guidelines. Another report published in 2014 by Clean Energy Nepal showed that in certain areas of Kathmandu, PM10 level reached 781 μg/m3 and PM2.5 levels spiked to 260 μg/m3, well above the recently collected state data.

The numbers vary in accordance with when and where the data is collected. According to Clean Energy Nepal, given Kathmandu valley’s bowl shaped topography, pollution is worse in the winter due to thermal inversion: a layer of warm air acts a lid that traps cold air and pollutants closer to the ground. During the monsoon and autumn seasons — when the recent government data was collected — pollutants can escape more freely, which improves air quality in the city.

Air quality in Nepal doesn’t stack up well against that in other countries. Yale’s 2016 Environmental Performance Index, which ranks countries from best to worst based on various environmental metrics, ranks Nepal 177 out of 180 countries for air quality. Public perception of Kathmandu’s pollution is in line with the Yale ranking: In a perception survey of tourists published by Serbia-based research website Numbeo.com in 2015, Nepal’s capital city was ranked the third most polluted city in the world.

While the poor air quality has raised the ire of Kathmandu’s denizens, the city government has been slow to take action. Some officials question the validity of the available data. “I have been trying to find the correct data that back all these studies and so far I haven’t been able to find any,” Ganesh Kumar Shrestha, director-general of the Department of Environment, told Earth Island Journal when asked about the non-government research. “The research from Serbia was a perception survey, which has no scientific value, while the Yale survey is very narrow to show much.”

With regards to the recent government data, Shrestha acknowledged that pollution was high, but said there was “no need to worry” because the numbers do not remain constant, adding that there is a need for “further analysis to measure actual air pollution levels.”

To those studying the effects of air pollution in Kathmandu, the public health impacts are unambiguous. Fine particles are known to cause inflammation and contribute to lung cancer, cardiovascular disease, birth defects, and premature death. A recent study found “extremely high concentration” of 15 priority polycyclic aromatic hydrocarbons (PAHs) — a group of highly carcinogenic organic compounds that are formed due to the incomplete combustion of fuels including coal, wood, petroleum products, and garbage — in ambient particles collected in the Kathmandu valley from April 2013 through March 2014. And in a 2009 report, the Nepal Health Research Council and WHO estimated that 1,926 premature deaths in Kathmandu can be linked to air pollution every year.

In Kathmandu, these health impacts are observably worse for traffic police officers, who have to spend a minimum of 14 hours a day on the roads guiding more than 700,000 vehicles through intersections. Currently, not a single traffic light in the city is functional, a problem that has persisted for more than a year. A 2015 study to assess pulmonary functions in the traffic police personnel working in Kathmandu valley found the longer they performed traffic duty, the greater the harm to their lungs. A source within the Nepal Police Hospital says that police working the traffic beat often suffer higher rates of eye problem, hearing loss, and irritability without any additional medical or leave provisions.

Deputy Inspector General of Police Prakash Aryal is concerned about the situation: “My people have to work under extreme circumstances, every time I ask them to go do their duty, I am in a dilemma. As a manager I have a responsibility to ask them to do their job well, but I feel I am exploiting these people knowing the risk to their health.”

Indeed, a 2012 report by ICIMOD states that the problem is exacerbated by the fact that more than a third of vehicles fail to comply with Nepal’s emission standards. Aryal believes more than 80 percent of vehicles are non-compliant, but traffic police are not able to enforce emissions standards.

Air pollution in Nepal is strongly linked to the city’s growing population — Kathmandu has one of the highest rates of urbanization in the world. Unfortunately, it also lacks an efficient public transport system. As a result, many residents have chosen to buy private vehicles. Registered vehicles in the capital rose from fewer than 200,000 in 2001/2002 to more than 700,000 in 2012/2013, and by some estimates 60 percent of the city’s air pollution can be attributed to vehicle emissions.

Given the dangerous situation, environmental activists started the MaskMandu campaign in June 2016, declaring Kathmandu a “Mask-Must Zone.” Shail Shrestha, president of Cycle City Network Nepal, a group the promotes cycling as a means to reduce carbon emissions, says this isn’t a one-off event and that the coalition of activists involved with the campaign will maintain pressure on the local government until air pollution reduces enough to meet the National Air Quality Standards.

The work won’t be easy. Rajan Thapa, program coordinator for Clean Air Nepal, which also helped organize MaskMandu, says, “Over the years we have approached various ministers and departments but the response has not been good. We need to see some action.” He says the problem is not that Nepal does not have laws — the right to a clean environment is enshrined in the national constitution — the problems are implementation and a clear understanding of whose responsibility it is to enforce emissions standards.

There is acknowledgment, even amongst some in the government, that air pollution is making Kathmandu unlivable. But so far, acknowledgment hasn’t translated into government action. The city’s new air quality monitoring program is a step in the right direction — now it’s time for the state to step up and address this pressing environmental health crisis.

This story was supported by the ICIMOD Atmosphere Initiative Story Grant Programme.