Consistent haze is interfering with the stunning views many trekkers expect, raising concern among some industry professionals
Slok Gyawali

South Asia’s notorius “atmospheric brown cloud” could impact Nepal’s appeal as a tourist destination. Visitors are voicing their concern about the three-kilometer-thick toxic cloud that sits over much of the region, including large swaths of Nepal, and interferes with their experience of a country promoted as a trekker’s paradise. 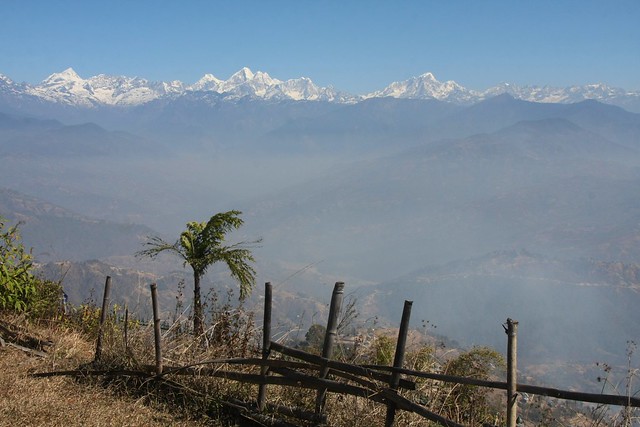 “I am asthmatic so I find the pollution exhausting,” Jacob Beehan, a German tourist, tells me over coffee in Kathmandu’s Thamel area. But what has been particularly disturbing for me has been the how the pollution has spoiled some of the views. It’s really bad in this city.”

Tourism is a major source of revenue for Nepal. In 2014, the country welcomed 790,118 tourists, and earned roughly $780 million, or 4.3 percent of the GDP in the process,. (The numbers dropped by more than 44 percent in 2015 due to the devastating earthquake and a blockade at its borders with India, Nepal’s neighbour and largest source of tourists.) A 2014 report by Nepal’s Ministry of Culture, Tourism & Civil Aviation estimates that every six tourists create one job in Nepal.

A growing number of tourists have been sharing their disappointment about the air pollution and haze on prominant travel sites like Lonely Planet in recent years. “My family and I visited Nepal for three weeks from late March to mid-April [2013]. I would never go back at this time again as the visibility was TERRIBLE! We were in Kathmandu, Nargokot, Baktipur, Pokhara, Sarangot, and the Seti River area. We got one hazy glimpse of a snow topped mountain in Pokhara on one afternoon. We NEVER saw the mountains again,” vents a disappointed traveller under the username Kazmom on the Lonely Planet website.

The atmospheric brown cloud (ABC) is composed primarily of man-made pollutants, including toxic ash, black carbon, sulphate, nitrates, and aerosols, and is a global phenomenon. The densely populated Indo-Gangetic plain — a fertile plain that extends through parts of Pakistan, India, Bangladesh, and southern Nepal — however, is one of the five ABC regional hot spots identified by the United Nations Environment Programme, meaning the pollution is worse and blocks a higher percentage of sunlight. Across the plain, forest fires combine with smoke from slash and burn agriculture, emissions from automobile vehicles, and industrial and indoor pollution to add to the haze. This concentration of aerosols is then distributed across Nepal’s hills and mountains by the winter westerlies, prevailing winds. 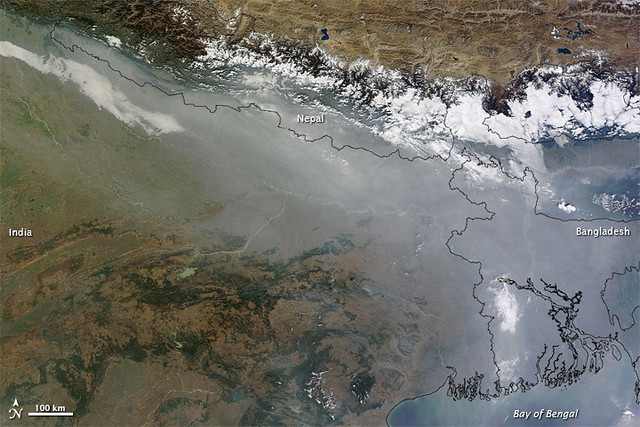 Photo by NASA’s Earth Observatory Haze along the Himalayas in December 2011.

The pollution problem is severely acute between November and April. In November, large tract of post-harvest lands across Northwestern India are set on fire as farmers try to get rid of rice paddy stalks. Adding to this shroud of smoke is the increasing frequency of forest fires across India and Nepal. Last year was a particularly intense fire year. In the first two weeks of April 2016, NASA reported that wildfire had consumed 1.3 million hectares (over 3.7 million acres) of forest cover in Nepal. In India, the number of forest fires increased by 55 percent between 2015 and 2016.

Particulate pollution levels have also spiked recently in parts of Nepal. In April 2016, for instance, scientists recorded black carbon concentrations on Mount Everest, which are usually about 0.3 micrograms per cubic meter, at 1.2-2.4 micrograms per cubic meter. The team attributed the spike to an increase in fine particles from burned biomass, such as from cooking stoves fed by wood or crops, or from forest fires.

A 2011 study by the International Centre for Integrated Mountain Development (ICIMOD), found a strong link between air quality and tourism: Avia Club Nepal, a provider of air sports activities for mountain tourists, had to cancel flights on particularly hazy days. Saurav Rajkarkinar, executive director of the Himalayan Front Hotel in Sarangkot, near Pokhara, Nepal, told me how 2016 was the first year in which haze has been a prominant concern among tourism professionals. “A tour leader told me how in his 15 years of doing this job, this was the first year that the mountains were not clearly visible” for several days in a row as a result of consistent haze.

Of course, pollution also has implications outside the tourism sector. Studies have found that black carbon contributes to a host of health problems, including respiratory problems, cardiovascular disease, and cancer. In the Himalayas, where glaciers are shrinking and snowlines are being pushed higher and higher, black carbon has also been found to accelerate these processes.

But not all is grim. In fact, most signs suggest that tourism will continue to grow despite air pollution. Nepal remains a haven for trekkers across the globe. Its potential as a tourist destination has in the last few months been endorsed by travel guide companies like Forbes and UK-based National Geographic Traveller. In fact, National Geographic Traveller placed Nepal sixth among 16 cool locations to visit in 2016.

According to Dr. Dhananjay Regmi, a Kathmandu-based mountain-geomorphologist and a businessman involved in tourism and hydropower development, Nepal’s changing climate and melting glaciers themselves hold tourism potential. He says parts of the country can be used as “open natural laboratories” for educational tours to increase understanding of the hazzards of air pollution and climate change among students, and that such an economic incentive, through tourism, may encourage locals to maintain monitoring stations in these lightly inhabitated areas and report hazardous changes.

Some positive steps are already being made when it comes to addressing the country’s pollution problem. According to Bidya Pradhan, associate coordinator for ICIMOD’s Atmosphere Initiative, “locals have restricted people from burning fossil fuels or cooking [with] fire along trekking routes. Such consciousness is a big step.” Even bigger, hotels like the Himalayan Front Hotel in Pokhara have replaced fossil fuels with alternative energy sources.

Countries throughout the region contribute to the atmospheric brown cloud. But if these positive measures continue, Nepal will reduce the chance of having to issue an alert over concerns about its air quality — like those that have been issued by neighbouring India and China. Such a scare is the last thing Nepal needs, especially after the tourism sector was punctured by the 2015 earthquake and border blockade.

Rajkarnikar is optimistic that Nepal can maintain its appeal to the global traveller if planned steps are taken to address the situation. And the incentives to do so are high. “We understand that if haze covers view of the Himalayas for most of the year, the biggest loser will be tourism,” he says.

This story was supported by the ICIMOD Atmosphere Initiative Story Grant Programme.