After the Frack: Habitat Fragmentation

The use of the unconventional hydraulic fracturing method of oil and gas extraction has expanded energy infrastructure across parts of the nation that were previously untouched by machinery. Pristine forests in Pennsylvania, wide-open prairies in the Dakotas and Texas, and clear-blue streams in Ohio have been forever altered. As fracking operations have spread across the American landscape, these once pristine areas have been converted into fields of pumpjacks and islands of oil and gas Christmas trees. In the wake of this landscape change, animal species have suffered huge losses as their habitats have become fragmented and they have been forced to find a new place to live. Unfortunately, many of these changes may scar the landscape long after extraction activities have ended. 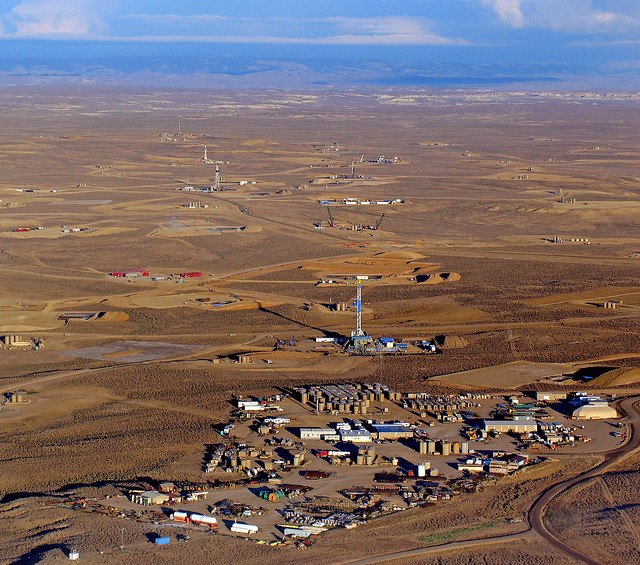 Photo by EcoFlight Researchers believe that fracking-related habitat fragmentation will have long-lasting consequences.

Habitat fragmentation can, of course, happen through natural processes, including floods, volcanic eruptions, earthquakes, landslides, tsunamis, hurricanes, and the like. But in the 21st century, habitat fragmentation has more often come from man-made causes. Oil and gas development in particular has sped up this process in several states in the past few years. Constructing well pad, roads, compressor stations, and gathering lines, among other infrastructure, causes serious disturbances to the natural environment. Scientists have estimated that an average drilling and hydraulic fracturing operation and its accompanying infrastructure can span at least 30 acres for a single well pad, creating a giant ecological footprint.

Several recent studies have outlined the serious impacts of habitat fragmentation. One found that habitat fragmentation of forest ecosystems can reduce biodiversity up to 75 percent. (Read more here.) And last year, a study published in Frontiers in Ecology and the Environment identified habitat fragmentation as one of the long-term impacts of oil and gas investigation. “These changes are happening in our environment and we need to take the opportunity to learn from them so that we minimize future environmental impacts,” said lead author Sara Souther in an interview with Earth Island Journal.

Several species have become high profile victims of fracking-related habitat fragmentation and disturbance. One example is the lesser prairie chicken, which nests in short prairie grasses and in areas devoid of trees. Scientists believe this behavior may reflect a fear that predators such as falcons are lurking in trees. Researchers have found that pump jacks, drilling rigs, and other tree-like drilling structures have the same effect on the birds. In an effort to escape the structures, the prairie chickens are left with less and less land on which to nest. After much debate and several years of negotiations, the lesser prairie chicken became the beneficiary of a range-wide conservation agreement in Texas, New Mexico, Oklahoma, Kansas and Colorado, but still faces threats from those in Congress who want to see it delisted from the Endangered Species Act.

Several other species have also gained notoriety in fracking-heavy regions due to loss, degradation, and fragmentation of habitat. The dunes sagebrush lizard became famous for crossing the paths of energy developers in Arizona, Texas, New Mexico, and Oklahoma. The greater sage-grouse is on the radar in several western drilling states, and the subject of contentious federal debate around a possible Endangered Species Act listing. In Ohio’s Utica formation, the Indiana bat, which has been endangered since 1967, has been the subject of concern, along with the northern long-eared bat, which is currently listed as threatened under the Endangered Species Act.

Habitat fragmentation can also create a breeding ground for invasive species. Infestations of Russian tumbleweed, for example, have been exacerbated by oilfield activity because the plant tends to grow anywhere soil is disturbed, especially by urbanization. The tumbleweed now grows rampantly in Texas, New Mexico, and Colorado. With its uncountable seeds blowing in the westerly winds, the plant has become a bane for ranchers and farmers near oil and gas exploration areas. Pennsylvania scientists have also documented invasive species on well pads. A recent study reviewed 18 well pads in the state and found 11 non-native invasive plant species on 14 of the sites. Japanese stilt grass was found to be the most invasive.

Some government bodies are beginning to pay closer attention to these impacts. Through urging from the National Parks Conservation Association, in 2010 the Department of the Interior established a Master Leasing Plans process for oil and gas development. When used, these leasing plans can help ensure that development near sensitive areas like national parks is planned with consideration of other nearby land uses and minimize impact on nearby habitat.

In December 2012, the Pennsylvania Department of Natural Resources adopted a proactive approach and began conducting site assessments prior to choosing drilling locations. When species endangerment is an issue near a proposed site, alternatives are now discussed. After extraction activities end, sites must be restored as much as possible to the condition they were in prior to exploration. However, as reported by StateImpact Pennsylvania, as of May 2015, only 5 percent of Pennsylvania’s almost 200 well pads had been even partially restored. Vermont and New York have taken a different approach by banning fracking altogether.

As the decline of oil prices leads to waning exploration and extraction in some shale regions, stakeholders may begin to take a closer look at what has been left behind after the drilling. Souther and her team believe habitat fragmentation will have far-reaching consequences for generations to come. The key issue, they say, is to start the conversation now, while there’s time to change the laws and practices before more habitats are disturbed and fragmented.

The author’s reporting for this story was supported through a fellowship from the Institute for Journalism & Natural Resources.