After the Frack: Bright Lights in the Middle of Nowhere

Air, light, and noise pollution linger long after the drilling is over
Lana Straub

The humming sound was deafening. Standing in the driveway of the Brothers’ home it was 50 decibels, but as we walked toward the edge of the road, the sound meter jumped to 85 decibels. The creator of this offensively loud humming noise was the compressor station located just across the road. It ran night and day, 24/7, and had invaded Frank and Theresa Brothers’ home just a year ago. Unfortunately, compressor stations are a necessary component of an oil and gas pipeline system. They help move gas and liquids from one part of the pipeline system to another. 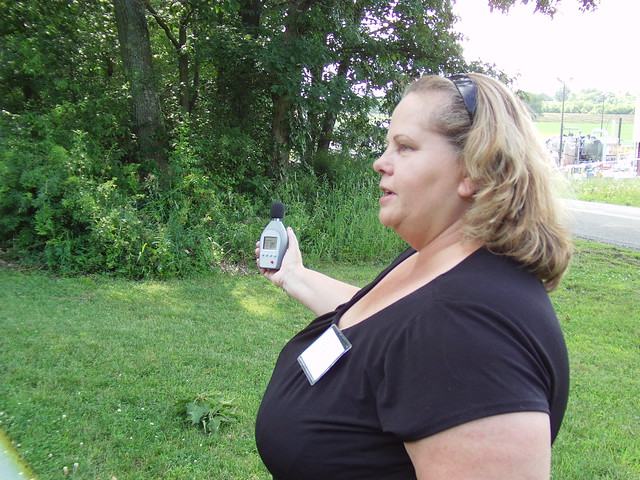 Photo by Lana StraubThe noise from compressors, which run 24/7 at fracking operations, can be deafeningly loud.

The Brothers’ land has been in their family for generations. When they built their new home prior to the oil boom in Carroll County, Ohio, they had no idea that their new neighbor would be so loud that the sound would knock the photos off of their walls in the middle of the night. The compressor station sits about 350 feet from their home and even though the noise is deafening, with only three years into their mortgage, they can’t afford to move.

“A lot of people have told us that we are fools to pay for our house cause it isn’t worth nothing now,” said Frank. “It’s worth as much as someone is willing to give you for it,” chimed in Theresa. “The oil company offered us 65 percent of the appraised value to move,” said Frank. He said that equals just about what he owes on his mortgage.

Noise pollution is only one of the many types of pollution that people living around oil and gas exploration areas have to deal with. And even after the fracking vehicles move on, remnants like compressor stations remain as constant reminders that the landscape around them has changed forever. Light and air pollution also often linger around along with the noise long after the oil and gas wells have been sucked dry.

Humans aren’t the only ones affected by this. Long before drilling rigs, fracking trucks, and compressor stations enter neighborhoods, the wildlife in the area already begins to feel the impact of preliminary exploration work. If the animals’ habitats haven’t already been fragmented by the oil and gas exploration activity, their homes are certainly changed once the drilling operations start in earnest.

Scientists have already established that shale development operations cause light, noise, and air pollution, but not much is known about the specific biological impacts of these operations.

In a 2014 report that appeared in Frontiers in Ecology and Environment, a team of ecologists and biologists examined thousands of studies to determine knowledge gaps in estimating ecological threats to plants and wildlife in shale development regions. The researchers found that “surprisingly little research has focused on the biotic impacts of shale development.”

What little research is around, they noted, “generally lack clear mechanistic links to fuel extraction and are limited to a small number of species, countries, and ecoregions.” Moreover, the researchers wrote, “shale development differs from other forms of fossil-fuel extraction in multiple ways, including a broad and diffuse geographic footprint and an extremely high water demand. Therefore, many of the biotic impacts of shale development are unique and cannot be inferred from knowledge of other forms of oil and natural gas extraction.”

The key to bringing the environmental effects to the forefront of our minds is to think of them as how they apply to our everyday lives, says Morgan Tingley, a conservation biologist and coauthor of the report. “We should think about the health of our agricultural fields, our wildlife, and our pets — what kind of long-term effects is hydraulic fracturing having on the food we eat and the air we breathe?”

The effects of light, noise, and air pollution were on the researchers’ list of the impacts least studied with respect to shale development. However, they did find a few studies that had looked into these issues. In 2010, a study published in the Trends of Ecological Evolution found that animals experience “substantial changes in foraging and anti-predator behavior, reproductive success, density and community structure in response to noise.” A 2011 study published in Ecology Letters found that anthropogenic noise, including that caused by oil and gas development activities, can affect the neuroendocrine system, reproductive system, cardiovascular system, as well as the metabolism of animals exposed to noise for excessive periods of time. 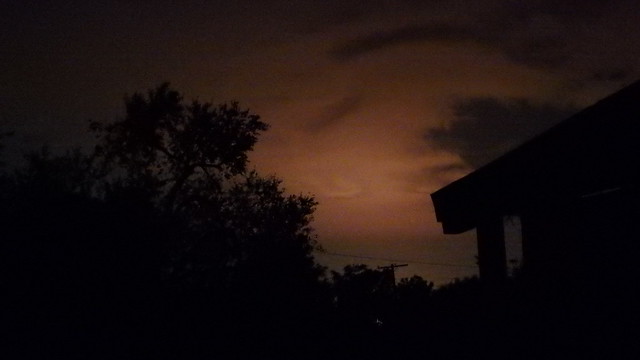 Photo by Lana StraubIt isn’t unheard of for someone to think they see a wildfire burning in the night sky only to discover that it’s the glow from a flare. The effect is often referred to as a permanent full moon and its impact on wildlife can be life changing.

Several offenders can cause air pollution from oilfield activity. Oilfield trucks carrying water and sand sometimes line up 50 trucks deep during a fracking job. These trucks might idle for hours waiting their turn to dump their cargo at the well site. Oftentimes, once the well construction is completed at a new site, flares are placed at the well head to dispel the excess gases that have nowhere to go since the pipeline infrastructure is yet to be being built. These sites also tend to emit fugitive emissions that escape despite elaborate systems to keep them from the atmosphere.

The US Environmental Protection Agency as well as many state oil and gas agencies, such as the ones in Texas and Ohio, decided in the early stages of the oil boom that the lack of infrastructure necessitated the practice of flaring as part of doing business. They allow oil and gas companies to obtain air permits that allow them to legally release gases into the air as long as they keep within the permitted levels. In some states like South Dakota, even though the flaring is illegal, contactors burn up the gases anyway because there is no infrastructure in place to capture the excess gas. They see it as protecting their investment because if the gas isn’t flared, it could cause irreparable damage to the wellhead and the shale formation. However, recent changes in EPA regulations are aimed at curbing flaring and reducing emissions by at least 10 percent.

Scientists at the National Oceanic and Atmospheric Administration and Cooperative Institute for Research in Environmental Sciences have been studying the gases, especially methane and volatile organic compounds like nitrogen oxides, that escape into the air above oil and gas production areas in the US in recent months. Their study, SONGNEX 2015: Shale Oil and Natural Gas Nexus examined emissions in these areas from March to May 2015. According to their whitepaper: “An early study demonstrated the enhanced concentrations of hydrocarbons in an oil and gas production region in Texas and Oklahoma, [and} a recent analysis for the Marcellus region suggested an enhancement in nitrogen oxides.”

Light pollution has always been a threat to wildlife. However, as oil and gas development wanders into the wilderness areas, so does the need to light it up. Light pollution often is considered an after-effect of the 24/7 work cycle in the oilfield. If workers and equipment are in the field they must have lighted worksites to maintain safety. Apart from electric lights, flaring also produces extreme light pollution. It isn’t unheard of for someone to think they see a wildfire burning in the night sky only to discover that it’s a furiously burning flare. The effect is often referred to as a permanent full moon and its impact on wildlife can be life changing. The International Dark-Sky Association is working to show oil and gas companies how to mitigate some of the damage caused by light pollution. For instance, Pioneer Energy Corporation recently teamed up with McDonald Observatory to help alleviate oil field light pollution in the West Texas skies. By upgrading their lighting systems, using shields and LEDs, Pioneer was able to reduce their light emissions and still maintain rig and personnel safety.

As fracking operations expand across the country, there must be conversations to find better ways to combat its environmental impacts. The key to mitigating air, noise, and light pollution is to pinpoint the problem and address it, as Pioneer Energy did to keep the skies dark over Texas. The long-term environmental and health impacts of fracking operations are far reaching and we should be thinking about long-term solutions to mitigate them.

But for people like Frank and Theresa Brothers whose property has already been invaded by oil and gas activity, such solutions may come too late. “The amazing thing about it is how far away from it you can get and still hear it. You can get way back in the woods, 1,500 feet away and all you can hear is the compressor running,” says Frank Brothers.

This series was made possible through a fellowship from the Institute for Journalism & Natural Resources.