Vulture Populations Are Crashing in Africa

Scavengers are under threat from farmers, poachers, and illegal trade in body parts
Ray Mwareya

Vulture populations are facing steep declines across Africa due to poisoning and the illegal trade in vulture body parts fueled by traditional medicine. According to the first comprehensive analysis of African vultures, published in June in Conservation Letters, populations of seven African vulture species have declined by 80 percent or more over the last 30 years. 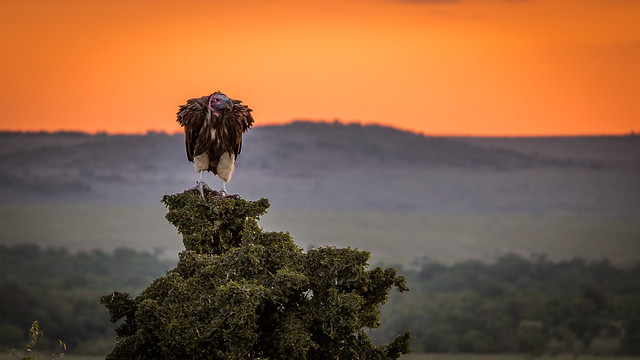 The biggest threat to vulture populations is poison left out by farmers. Farmers often use poisons to kill jackals, rabbits, lions, and wild pigs that threaten crops. When vultures scavenge on farms and find animals killed by poison, they ingest the poison as well.

“Sometimes we use poison baits to kill farm jackals and other predators,” admits Gerrie Prinsloo, a potato farmer in the South Africa’s Cape province and chair of the Farm Conservationist and Animal Welfare Taskforce, a group working on vulture conservation issues. “Vultures walk into the deadly mix.”

“It’s a dilemma,” he adds. “You want to deter pigs that trample over your crops. You end up killing ten vultures with one poison.”

According to Ash Naude of the South Africa Griffon Vulture Information Centre, a project of the vulture conservation organization Vulpro, 86 bearded vultures, which are endangered, died on a farm in South Africa’s Cape province after feeding on the flesh of dead farm sheep in October 2014. The bearded vulture, whose range in southern Africa is restricted to the Maluti Drakensberg mountains in South Africa and Lesotho, is classified as an endangered and continues to decline in numbers, according to the South Africa National Parks agency website.

Vultures also fall victim to intentional poisoning by poachers targeting rhinos, elephants, and tigers. Armies of vultures circling over an elephant carcass alert police and game rangers to poachers’ activities. To avoid detection, poachers will often spray the body of their kill with lethal pesticides and other poisons to kill the scavengers.

The impact can be far reaching. In one grisly example in July 2013, up to 600 vultures perished after eating the flesh of a dead elephant in Namibia’s Bwabwata National Park. Electronic tags pinned on some of the dead vultures showed they had flown all the way from South Africa.

“Vulture poisons work hand in hand with elephant poachers,” says Max Bernes, an ecology director with South Africa National Parks, which manages national parks in the country. “If poachers eradicate vultures they can slaughter elephants without detection. Simple, alarming as that is.”

According to the recent analysis, since July 2011, there have been at least 10 poising incidents associated with poaching, which collectively killed at least 1,500 vultures in six southern African countries.

The illegal trade in vulture body parts for use in traditional medicine also poses a substantial threat to vultures, accounting for an estimated 29 percent of vulture deaths in the past 30 years. In traditional medicine, vulture body parts are believed to bring good luck, cure physical and mental illness, and even increase intelligence in children.

In South Africa’s Eastern Cape province the local vulture population suffered a 50 to 60 percent decline from 1998 to 2013, according Jean-Marc Thiollay of France Laboratory of Ecology and Evolution. Andres Botha, a well-known conservationist at the South Africa Endangered Wildlife Trust, says up to 160 vultures are slaughtered every year in South Africa chiefly to satisfy the traditional medicine industry.

“In impoverished communities around this country vulture body parts are sadly and wrongly thought to have wealth attraction powers. Up to 80 percent of dwellers in some rural settlements visit an herbalist before seeing a western trained doctor,” Botha says.

The decline in vulture populations is also likely to impact humans. Vultures play a crucial role in cleaning up the waste of dead animals in many African countries where disposal technology is lacking. With declining vulture numbers, this valuable service is lost.

“Without vultures, animal carcass will rot. Bacteria will spill into water holes near human settlements and contamination aids deadly diseases like cholera,” says Dinny Solanto, an epidemiologist at the South Africa National Centre for Infectious Disease Control in the capital Pretoria.

Vultures also keep feral dog populations in check since they compete with the canids for food. In India and Bangladesh, where vulture populations plummeted in the 1990s after tactical poisoning by cattle farmers, feral dog populations increased, which led to an increase in rabies transmission from dogs to humans. Solanto says billions of dollars were needed to address this public health problem.

But there is still hope that vulture populations will recover. Some South African farmers are now bringing the flesh of dead livestock to “vulture restaurants,” wild sanctuaries where the birds flock to feast on donated dead animals. And in Cape Province, farmers are beginning to install lights to scare wild lions away instead of poisoning them, benefiting not only the felines but also scavenging vultures.