So far, tree-sitters have foiled recent logging plans in Jackson Demonstration State Forest. But they are calling for long-term protections.
Austin Price

Greasy Pete says the nights were peaceful in the canopy of Jackson Demonstration State Forest, near Fort Bragg, California. For nine days last April, he lived on a platform the size of a king size bed, 65 feet up in a 200-year-old redwood. He got used to the darkness, silence, and solitude — and the occasional gust of wind that rocked his platform like a boat.

“Greasy Pete” is the tree sitter name for Pele Rubin Clark, an 18-year-old resident of Elk, California, a town that straddles Highway 1 in Mendocino County. Last April, when Clark, at the time a senior in high school, heard that a logging operation was planned in the state forest, he packed his sleeping bag, a camp stove, and a backpack full of dry foods like ramen and oatmeal — and headed to Jackson, some 15 miles north. “It just seems so far fetched that they’d be logging in such a pristine redwood forest,” he says. 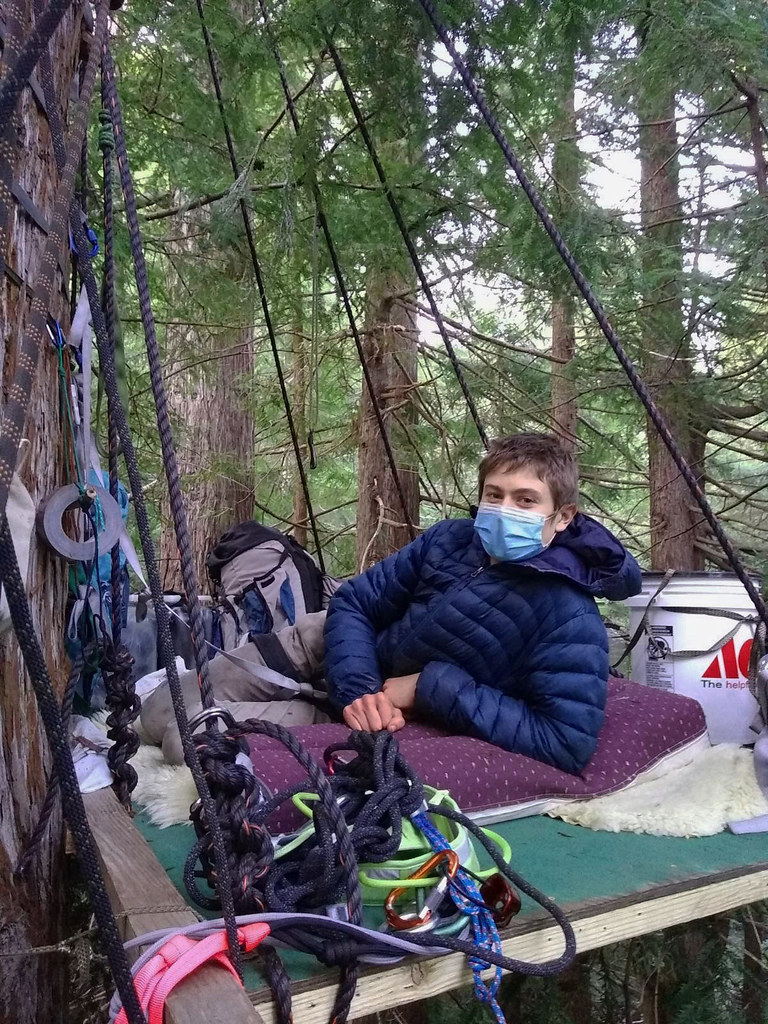 For nine days last April, 18-year-old “Greasy Pete” lived on a platform the size of a king size bed, 65 feet up in a 200-year-old redwood in Jackson Demonstration State Forest to block Cal Fire’s plan to log parts of the forest. Photo courtesy of Mama Tree Network. 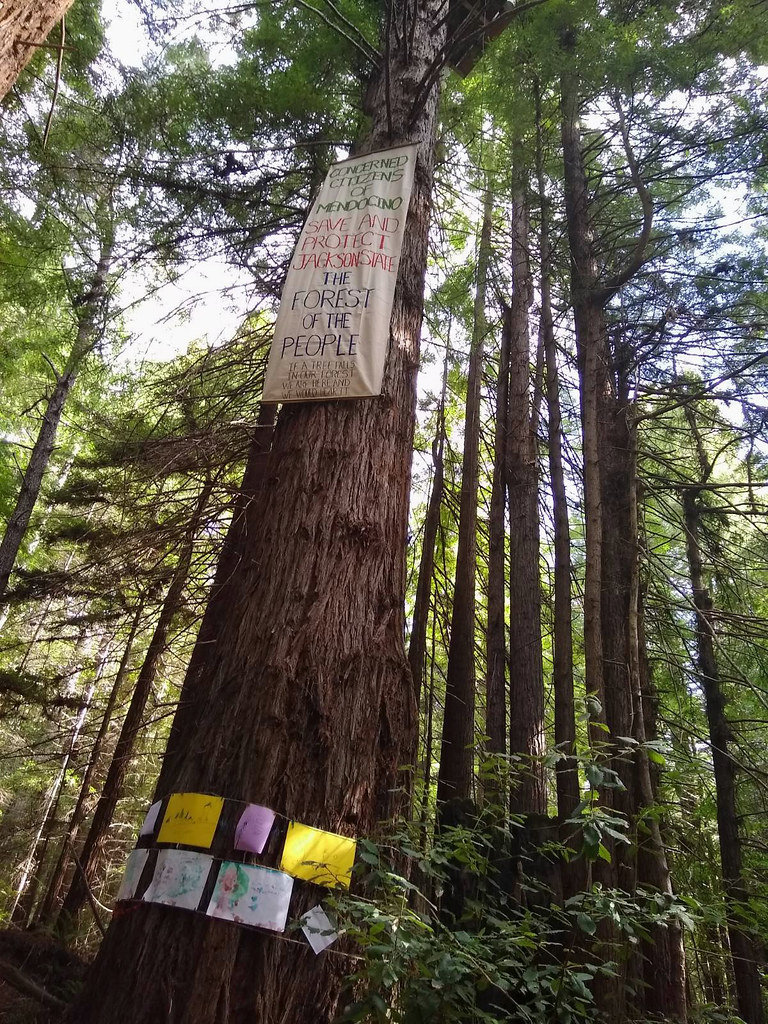 For many residents of Mendocino County, this timber harvest plan and protest is just one episode of a decades long struggle between environmentalists and the logging industry over how Jackson and other state forests in California should be managed — a struggle that has become muddled with recent record-breaking fire seasons in the state and industry talking points that say logging is a form of forest fire management. Photo courtesy of Mama Tree Network.

He spent his spring break harnessed to the tree, which was marked with blue spray paint and slated to be cut under a timber harvest plan approved by the California Department of Forestry and Fire Protection, commonly known as Cal Fire.

Greasy Pete began his tree sit on April 8, just a few days before Fort Bragg based Anderson Logging, Inc. was scheduled to begin logging. He wasn’t alone for long. On April 11, another tree sitter named “Bugs” climbed a tree 15 feet away. Down below, a community of activists from nearby towns started to form. When timber fallers showed up, they found protest signs hanging from redwoods and activists barring the road, chained to logging gates. Some of them wore diapers, making clear that they didn’t plan to vacate the forest anytime soon.

Anderson Logging postponed the cut due to safety concerns. To date, logging hasn’t resumed in Jackson Forest, but the protesters remain vigilant. For many residents of Mendocino County, this timber harvest plan and protest was just one episode of a decades long struggle between environmentalists and the logging industry over how Jackson and other state forests in California should be managed — a struggle that has become muddled with recent record-breaking fire seasons in the state and industry talking points that say logging is a form of forest fire management.

Cal Fire’s primary role as an agency is to fight or prevent wildfires on all private and state-owned forestland in California, more than 30 million acres altogether. As part of that mandate, the agency manages eight state forests for recreation and timber production, which includes drafting and approving timber harvest plans in those forests.

For Chad Swimmer, who lives south of Fort Bragg near Jackson, that’s a clear conflict of interest. “Essentially, when they prepare a timber harvest plan in Jackson, they submit it to themselves,” he says.

As an avid mountain biker, Swimmer has frequented the trails of Jackson Demonstration State Forest for three decades. It’s an easy forest to get lost in, he says. At nearly 50,000 acres, the largest state-owned forest in California, Jackson is a maze of coast redwood, Douglas fir, Sitka spruce, chinquapin, and different varieties of oak. The tree diversity reflects the diversity of birds and other wildlife, while the forest’s hundreds of fungi species make the trails popular among wild foragers. 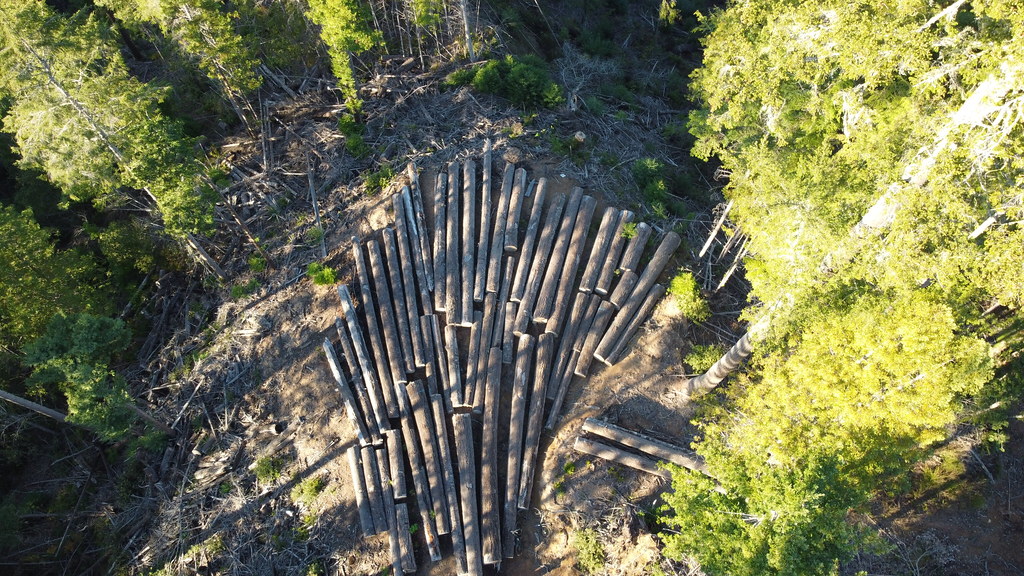 ​Logging has been a part of the landscape in Mendocino County for more than 150 years. In the 1860s, Jackson was at the center of a rush on timber that, along with gold, defined California’s early statehood economy. Photo of 60- to 120-year-old Douglas fir that were cut and left to rot by Chet Jamgochian.

​At nearly 50,000 acres, the largest state-owned forest in California, Jackson is a maze of coast redwood, Douglas fir, Sitka spruce, chinquapin, and different varieties of oak. The tree diversity reflects the diversity of birds and other wildlife, while the forest’s hundreds of fungi species make the trails popular among wild foragers. Photo by Tom Jackson Photography. 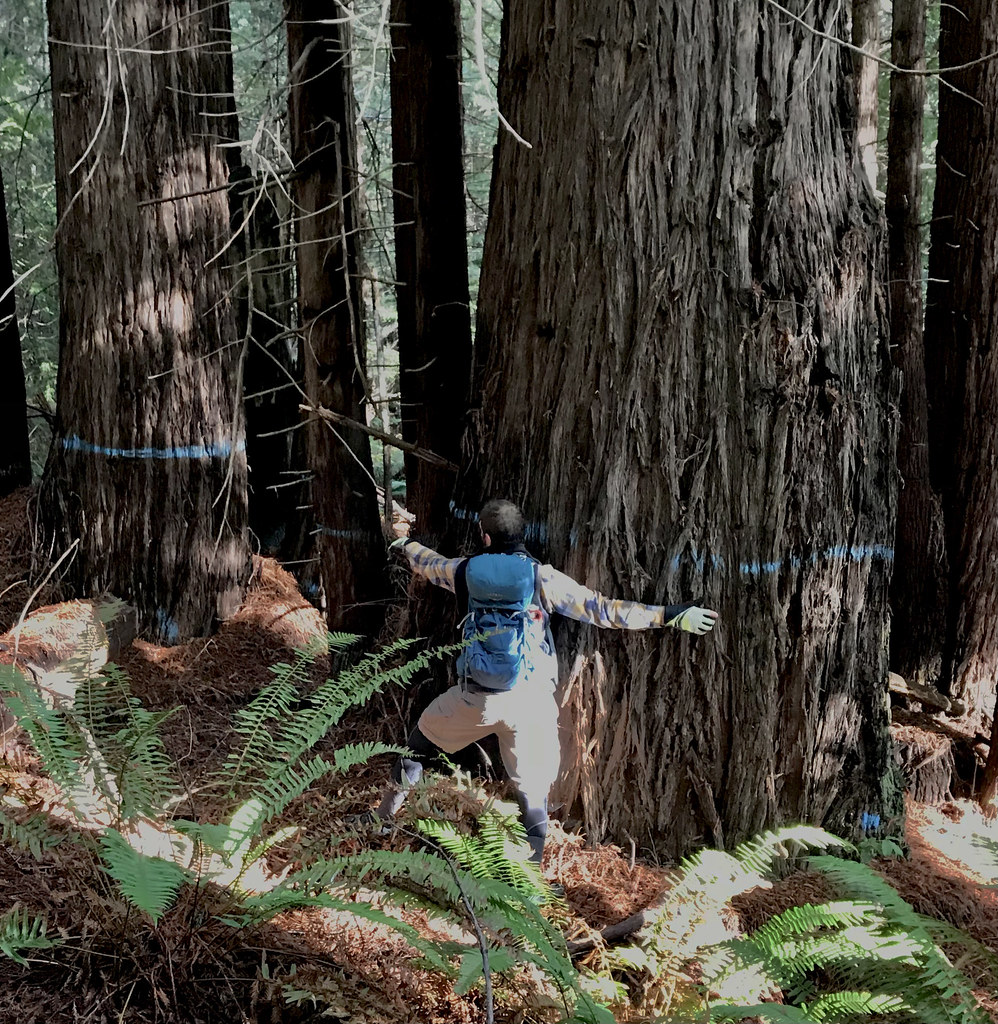 Last fall, while Swimmer and others were biking through Jackson, they came across a number of huge redwoods marked for cut with painted blue stripes. Swimmer took a picture with one of them, his arms spread out to show the tree’s immensity. Photo by Samuel Goldberger.

Swimmer also knows that logging has been a part of the landscape for more than 150 years. In the 1860s, Jackson was at the center of a rush on timber that, along with gold, defined California’s early statehood economy. For a hundred years, timber barons “cut [Jackson] to shreds,” says Swimmer, until 1947, when the Caspar Lumber Company sold the land, by then nearly devoid of its old-growth redwoods, to the state.

Two years later, the state established the land as a “demonstration state forest,” which meant the state would manage the forest in a way that demonstrates, according to Cal Fire’s website, “how forests can be managed for multiple objectives on multiple levels.” In other words, logging would continue in Jackson, though under the management of the state.

In March 2020, just before the pandemic erupted, Jackson’s then forest manager Mike Powers gave Swimmer and his mountain bike group, called the Mendocino Coast Cyclists, a map of new timber harvest plans that showed a dramatic spike in logging within Jackson. The agency was planning to log more than 2,500 acres in 2021, and thousands of additional acres over the next five years, including in areas typically used for recreation.

Swimmer kicked into gear and began organizing. He co-founded a grassroots organization called the Mendocino Trail Stewards and created a website to track timber harvest plans in Jackson and provide information to the public on how to comment on these plans.

Last fall, while Swimmer and others were biking through Jackson, they came across a number of huge redwoods marked for cut with painted blue stripes. Swimmer took a picture with one of them, his arms spread out to show the tree’s immensity. The photo found traction online, and this tree would eventually be the one Greasy Pete occupied the following spring. Activists from Redwood Nation Earth First! and other organizations got involved. The Mama Tree Network, who organized the tree sits, also documented evidence of a forestry practice called hack-and-squirt, in which loggers cut a slot in an undesirable tree and spray an herbicide to kill it off. The idea is to clear out hardwoods to make way for conifers. Mendocino County residents had voted to eliminate this practice in 2016.

The Coyote Valley Band of Pomo Indians also spoke out against logging in its ancestral lands. In February, the tribe requested a government-to-government consultation with Cal Fire. But according to Michael Hunter, tribal chairman for the Coyote Valley Band, the meetings were inconclusive until they “kind of fizzled.”

“Mendocino County has industrialized its forest and its streams since the gold rush and the timber rush,” says Hunter. “The people that are in power of this community continue to make decisions that are not in the best interest of our forest and our rivers.”

At a town hall meeting on April 8, as Greasy Pete was settling into his tree sit, officials from Cal Fire assured Jackson area residents that one goal of the timber harvest plans is to “build climate resilience in part through active forest management to reduce catastrophic risk of wildfires.”

But Swimmer and others call greenwashing on this narrative. “The standard line for a long time all across the West is that we need to log to reduce fuel load, so that we don’t have fires,” says Swimmer. “But when [Cal Fire officials] say they’re going to deal with an overstock [of fire fuel], they don’t mean they’re going to cut out the little stuff. They mean they going to cut out the trees that are worth money. The most vital, resilient trees.”

Swimmer’s skepticism is backed by research. In 2016, Chad Hanson, an ecologist and director of the John Muir Project, an Earth Island Institute project, coauthored a study that showed that logging under the guise of wildfire management can actually make wildfires worse, particularly in coastal forests that depend on shade and moisture. “Reduced forest protections and increased logging tend to make wildland fires burn more intensely,” he and 200 other climate and forest scientists said in a letter to Congress last May.

John P. O’Brien, a climate scientist with the Berkeley Lawrence National Laboratory and resident of Mendocino County, is concerned with this trend in Jackson. “If you’re thinning the forest by taking the biggest trees, that, across the board, will increase fire danger and reduce the resilience of the forest as a whole when inevitably a fire will come through.” Redwood forests, O’Brien also notes, are vital for carbon sequestration in a time when climate change is accelerating at alarming rates. “There’s a lot at stake here,” he says. “We all love our forests in California, and we are really faced with a very real threat of losing them for good.”

In May, O’Brien and other scientists, including Hanson, wrote a series of position letters to the Newsom administration, calling for an end to logging in Jackson Forest, as direct action activists continued to guard marked trees. In June, Anderson Logging halted operations in the state forest, but this decision was based on the presence of protesters, not on any policy shift.

“We’re making a lot of waves, but we need a permanent solution,” says Swimmer, mentioning a proposal prepared by the Mendocino Trail Stewards to turn Jackson Demonstration State Forest into a forest preserve with no commercial logging. O’Brien points to California’s promise to protect 30 percent of its land and water by 2030. “If there is going to be any credibility to the 30-by-30 goal, [California should] protect the redwood forest it already owns instead of logging it,” he says. “It’s low hanging fruit.”