Burning the brown coal under Lützerath will push Germany beyond its carbon budget, analysts say.
Paul Krantz and Leonard Frick

Update: As of January 18, German police had cleared the activist camp at Lützerath. However, some protestors were still hiding in a nearby forested area slated for destruction. Over the past few weeks two courts rejected attempts by environmental groups to prevent the clearing of the trees.

This past Sunday, thousands of protestors rallied in Lützerath, Germany, to prevent the “abandoned” village from being razed for an expanding lignite coal mine.

Police have been ordered to clear the village of Lützerath in North Rhine-Westphalia state for the international energy giant RWE’s massive, expanding open-pit coal mine — Garzweiler II. A start date for the eviction was set for Tuesday, Jan. 10, but police began taking down structures on the edge of “Lützi Camp” as early as Jan. 2, which resulted in dramatic clashes with protestors.

Protestors throw rocks at the gigantic bucket-wheel excavator at Garzweiler II lignite mine, which is scheduled to expand into the village of Lützerath in North Rhine-Westphalia state. The extraction of lignite (or brown coal) has become the subject of bitter contention in Germany. Photo by Tim Knorr.​ 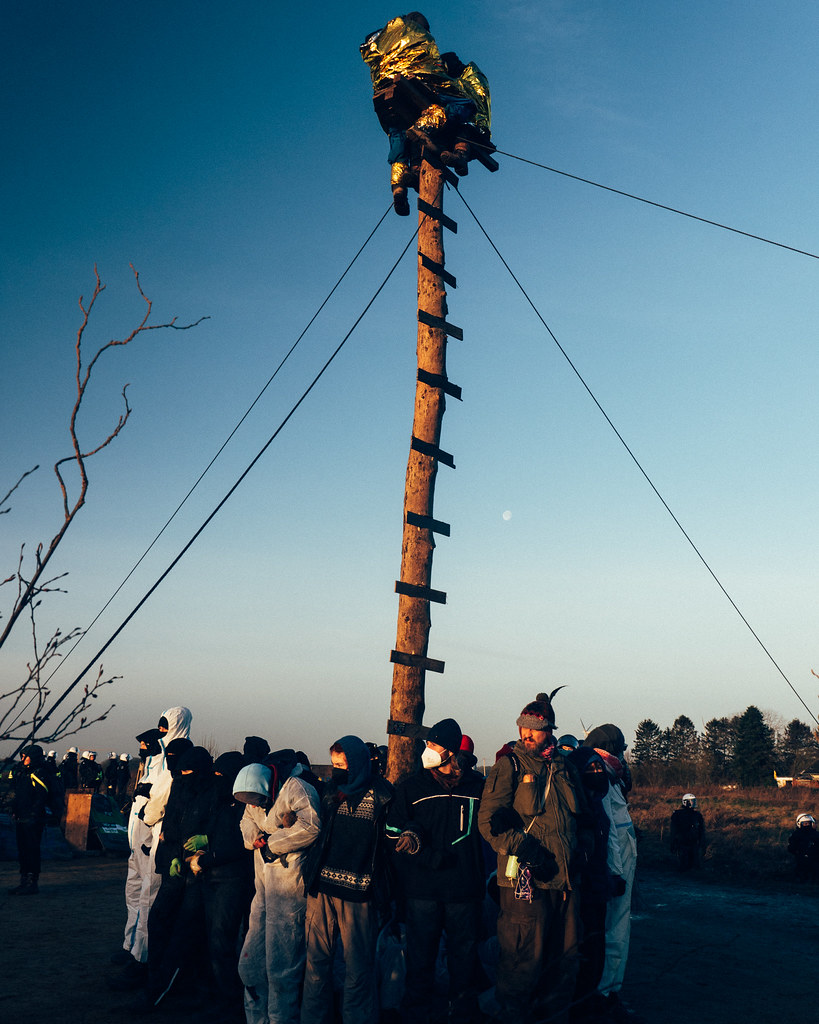 Activists have been engaging in several forms of direct action, including attaching themselves to tripod structures, forming human chains, and gluing their hands to the asphalt on access roads. Photo courtesy of Lützi Lebt. 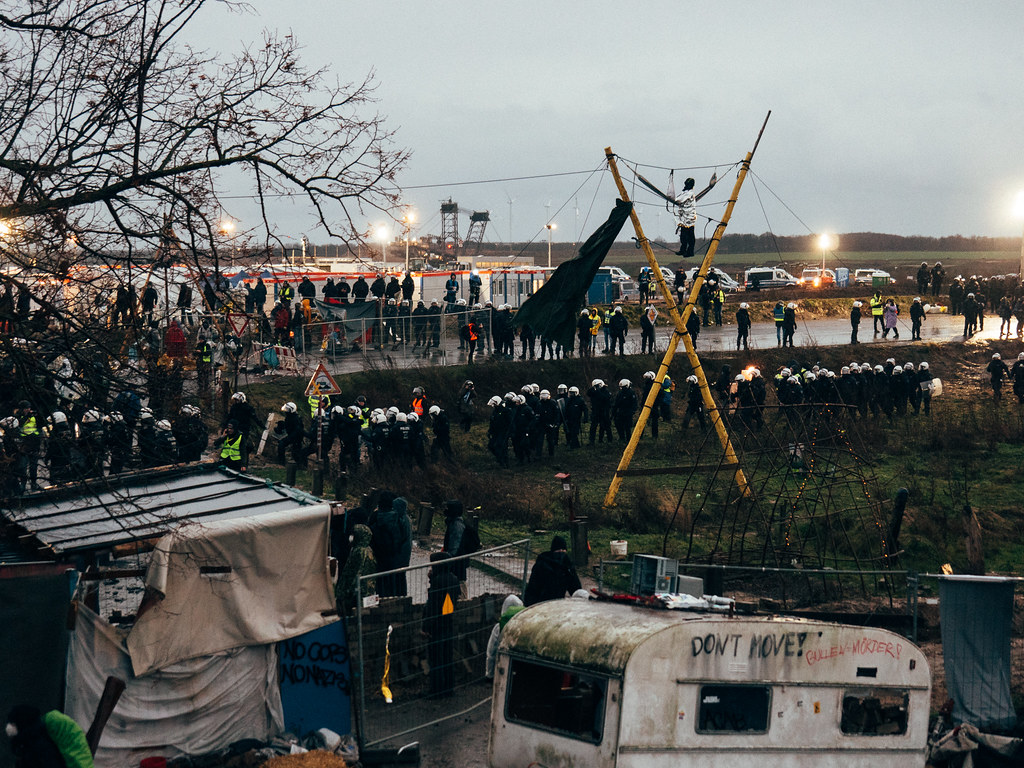 Those holding their ground at the camp say these actions, though controversial, are necessary to buy more time to mobilize against police efforts. Photo courtesy of Lützi Lebt.

Lützerath, and the area surrounding it, is technically the property of RWE, which bought out the land from local residents using an old Bergrecht (mining law) that essentially gives companies eminent domain-type rights to seize land for mining. One farmer, Eckardt Heukamp, challenged the land grab in court but ultimately lost the case last year. In the meantime, environmental activists set up camp on Heukamp’s former property, building treehouses and establishing a community that they hoped could resist RWE’s attempts to clear the land for mining.

Over the past few days, police forces attempting to secure space around the village have been met with activists engaging in mild to extreme direct action measures to slow them down. Such actions include people attaching themselves to tripod structures or gluing their hands to the asphalt on access roads. In a few cases, barriers were constructed and set on fire to block incoming police caravans. Actions such as these may be controversial even among those opposed to coal mining, but are largely understood by the activists on site to be necessary to buy more time to mobilize against police efforts.

Politicians who vocally support RWE’s legal claim to Lützerath, including German Green party members Robert Habeck and Mona Neubaur, say the additional 280 million tons of lignite coal under the village is needed for the country’s energy supply. Securing energy resources to replace Russian gas imports has been among the biggest challenges for Germany’s national government since Russia’s invasion of Ukraine last year.

However, a report by the German Institute for Economic Research (DIW) says that excavating the coal under Lützerath will likely push Germany past the carbon budget allowed by the 2015 Paris Agreement. Another report by Aurora Energy Resources, commissioned by the civil society coalition Europe Beyond Coal, claims that leaving the coal beneath Lützerath in the ground does not threaten Germany’s energy supply.

“It is not only legitimate but existentially important that people continue to fight for an end to the burning of coal,” tweeted Kathrin Henneberger, a Green Party politician from North Rhine-Westphalia who has long opposed RWE’s mining in the area. As of Monday, she was on site as a parliamentary observer. 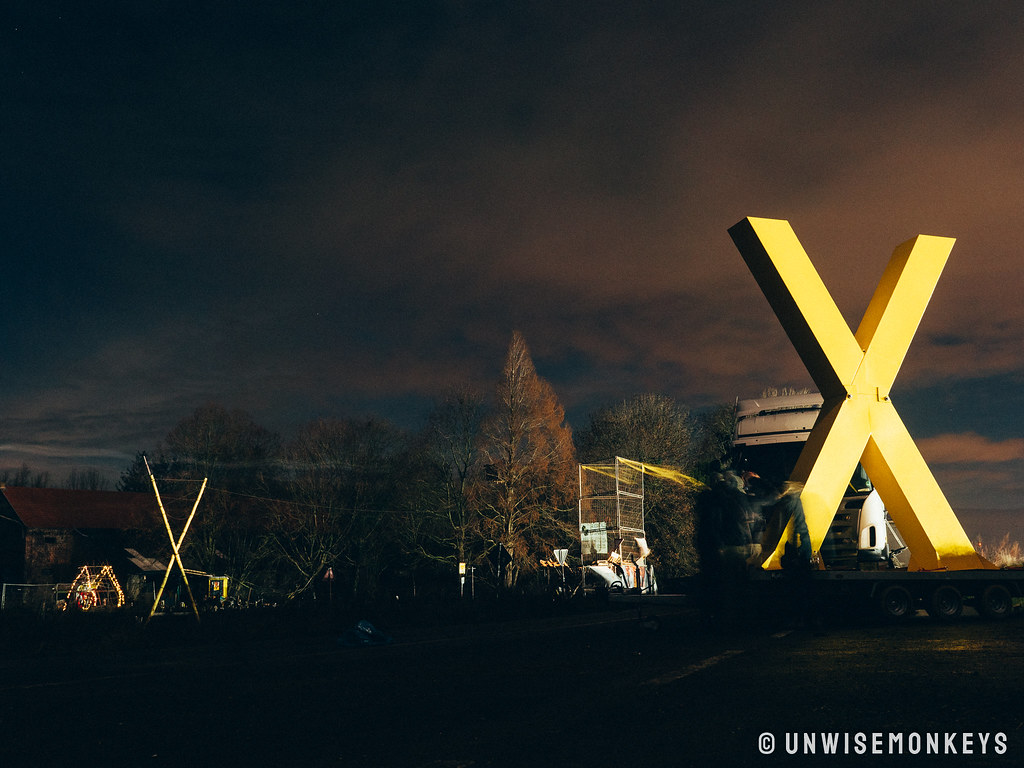 ​The yellow Xs have become a symbol of resistance at Lützerath. Photo courtesy of Unwise Monkeys. 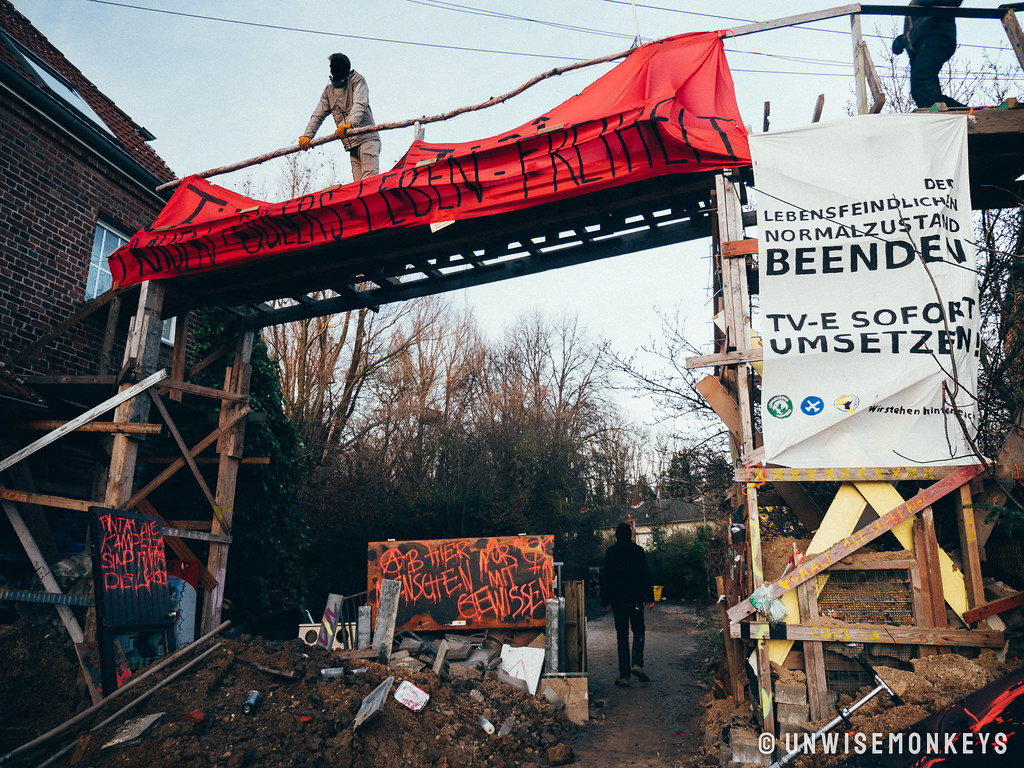 Climate advocates from across Germany and around the world have been arriving at the camp, braving Germany’s cold, wet winter weather to join a small community of activists who have been standing their ground since 2020. Photo courtesy of Unwise Monkeys. 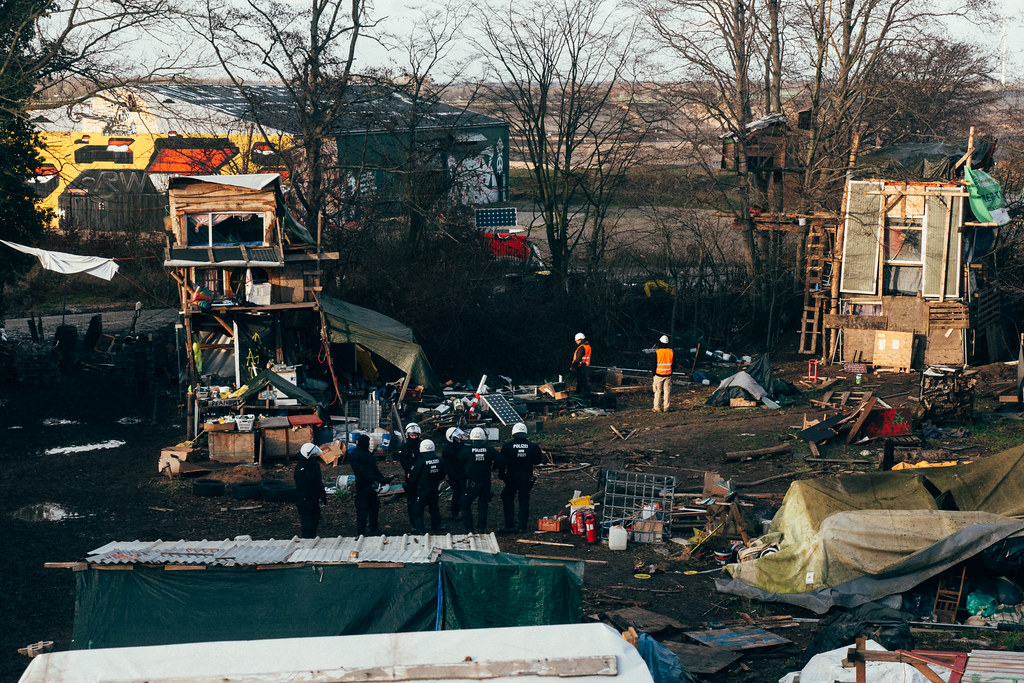 Most of the original Lützi Camp, on the property of farmer Eckardt Heukamp, the last resident of Lützerath who lost his bid against RWE last year, has been taken down by the police. Photo courtesy of Lützi Lebt.

“Lützi Bleibt” (“Lutzi Stays”) has become a rallying cry for the activists gathered at the village.

“The emissions don’t stay here, the destruction doesn’t stay here. We are fighting here for villages, for livelihoods, for forests, for fields and water all over the world,” Luisa Neubauer, a prominent leader of the youth-led climate group, Fridays for Future in Germany, told the crowd at Lützerath on Sunday.

Following a December announcement that Lützerath would be cleared in January, climate advocates from across Germany and around the world have been arriving at the camp, braving Germany’s cold, wet winter weather to join a small community of activists who have been standing their ground since 2020. As of Sunday, the crowd included members of Greenpeace, Fridays for Future, Ende Gelände, and related groups. Among them was Peter Emorinken-Donatus, who escaped to Germany after being imprisoned in Nigeria for organizing strikes against Royal Dutch Shell in 1989.

In a video interview recorded at Lützerath, Donatus said: “The circumstances in the Niger Delta and here are connected. It’s the same multinational companies that are destroying the environment all over the world. This is why we are here and why we won’t give up.”

The likelihood of activists successfully preventing RWE and state police forces from clearing Lützerath is slim, but the sheer number of demonstrators present at the site seems to have, at least temporarily, given them the upper hand. Action groups were able to stop police units that tried to push into areas around the camp, and also to take control of a newly-established parking lot, built to allow police vehicles to surround the village.

The immediate goal of the activists in Lützerath is to hold their ground for six more weeks, until the end of Germany’s logging season. After that it will be more difficult for RWE to legally clear the land for mining until the next logging season begins in October, because of the trees established around the village. RWE’s CFO Michael Müller also stressed, “The clearing must be done in the clearing period this winter.”

Asked for his thoughts on the likelihood of holding Lützerath, Avik Majumdar, a member of Lützi Camp’s “awareness team,” who has been living in the resistance camp for the past six months said, “We feel that there is a good chance now. The amount of people who have shown up makes us think we can keep it.”

Online
On the Edge

Activists are holding the line against a massive coal mine that is swallowing villages and slowing down Germany’s energy transition.

Six Decades on, the resource curse continues to wreak destruction in the Niger Delta.

Stakeholders on both sides of the conflict are hoping for a nonviolent resolution. RWE and the police desperately want to avoid a repeat of the Hambach Forest eviction, which was hugely expensive and embarrassing for both RWE and local police forces. The eviction, which took place in 2018, was criticized for its brutality and resulted in the death of a journalist who fell from a tree house.

In a statement to Earth Island Journal, the North Rhine-Westfalia ministry of interior said that the situation is not as dire as in the Hambach Forest. “In the course of an eviction, however, violent actions such as so-called lock-on devices or tripod actions, occupations, the erection of barricades or rappelling actions are to be expected,” it said.

For their part, Lützi Camp members are committed to engaging in nonviolent civil disobedience tactics. The camp’s awareness team tries to keep an eye on activists within the camp and to identify and discourage individuals who they think might take things too far.

Majumdar noted that a couple problematic individuals were seen “egging people on to throw stones” at police during a scuffle on Jan. 2. He said that those people have since been asked to leave the camp, and that the camp’s own security team has been alerted to make sure they don’t return. Members of the camp are mostly aware of the importance of maintaining nonviolent tactics, as many German media outlets are quick to publish reports of violent actions taken by the protestors.

The state interior ministry stated that “isolated criminal offenses and violent actions, such as stone throwing, the use of pyrotechnics and the ignition of flammable material” could not be ruled out. They estimate the majority of protestors to be peaceful and only a few of them are willing to commit violence. “Should violent actions occur, the police will consistently prevent them and prosecute them,” the ministry spokesperson said.

As of Wednesday morning, police have begun to push more forcefully toward Lützerath from all sides. A barricade has been set up around the perimeter of the camp, and police are restricting the movement of people to or from the village. Another rally is planned for Saturday, Jan. 14, when, again, hundreds or thousands of protestors will march around the camp in solidarity with those holding out inside.

The ministry of interior estimated the eviction will take “up to four weeks”. The protestors are determined to resist the police forces for as long as necessary.

Leonard Frick is a Berlin-based German journalist currently working for Handelsblatt, as well as freelancing, and is interested in human life and everything around it.
Paul Krantz is an American freelance journalist currently living in Berlin. His recent stories have appeared in Deutsche Welle and New Internationalist.