Federal court orders EPA to update its regulations on the use of toxic chemicals in oil spill responses.
Fiona McLeod

This month, a federal district court judge ordered the US Environmental Protection Agency (EPA) to update its regulations governing the use of chemical dispersants to clean up oil spills, ruling in favor of a coalition of individuals and environmental groups including Earth Island Institutes’s ALERT Project, the lead plaintiff on the case. (Earth Island Institute publishes the Journal.) 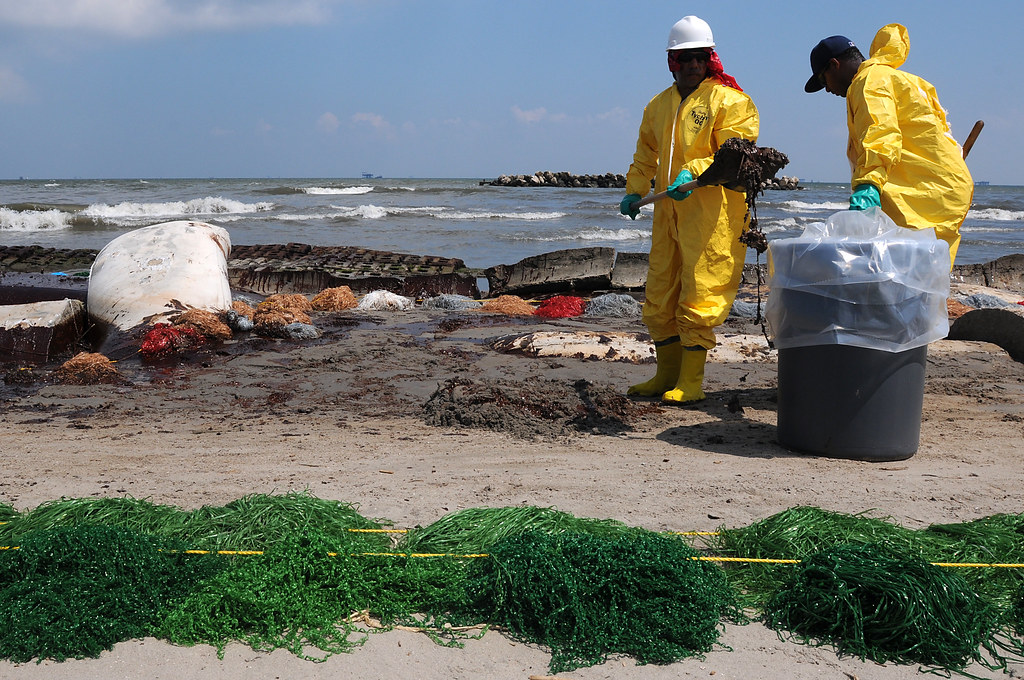 Members of a US Coast Guard Shoreline Cleanup and Assessment Team remove oil from a beach in Port Fourchon, Louisiana in May 2010. Gulf Coast residents and response workers were exposed to the toxic mix of oil and chemical dispersants used to clean up the massive oil spill. Many suffer from chronic illness and other debilitating health impacts as a result. Photo by Petty Officer 3rd Class Patrick Kelley / US Coast Guard.

For decades, chemical dispersants have been listed on the EPA’s National Contingency Plan (NCP) Product Schedule, a list of products that are available for use in response to oil spills. This, despite well-documented evidence that dispersants are hazardous to humans, marine ecosystems, and wildlife — and that, when mixed with oil, they can be more toxic than oil alone.

The lawsuit was filed in early 2020 in the US District Court for the Northern District of California by ALERT, Alaska Community Action on Toxics, Cook Inletkeeper, the Center for Biological Diversity, an Alaskan Native health aide, and a Gulf Coast commercial fisher. The plaintiffs sought to require the EPA to update its regulations governing offshore oil spill planning and response to reflect current science and technology — including the science demonstrating that chemical dispersants pose a dire risk to both human health and the environment.

“We can’t allow toxic chemicals to be added to a toxic oil spill for the benefit of the spillers,” said plaintiff Rosemary Ahtuangaruak, an Iñupiat tribal leader and activist who has worked with tribal councils to pass resolutions banning dispersant use in Arctic waters where Alaskan Natives hunt and fish.

Although dispersants were never explicitly approved by the EPA, their usage has in effect been authorized by the federal government by way of the NCP, which governs federal response to oil spills and other hazardous substance releases. Over time, the oil industry has fallen back on use of dispersants as the foundational contingency plan for responding to oil spills, rather than developing actual prevention measures or comprehensive response plans. Because they are included in the NCP, big oil corporations have been shielded from liability when people and the environment are harmed by exposure to the chemicals.

“The use of toxic chemicals to address marine oil spills is a largely unrecognized societal cost of America’s ongoing oil dependence,” said Claudia Polsky, director of the UC Berkeley Environmental Law Clinic and lead counsel on the lawsuit. “The human health toll of dispersant-intensive spill responses is a story that needs to be told alongside stories of marine creatures harmed by spilled oil.”

After the Deepwater Horizon disaster in 2010, BP sprayed nearly two million gallons of dispersants on the Gulf of Mexico, both by aerial application and by pumping the chemicals directly into the leak. Gulf Coast residents and response workers were exposed to the toxic mix of oil and chemicals through their skin and airways, and were denied proper safety equipment to protect themselves from that exposure. Many suffer from chronic illness and other debilitating health impacts as a result.

Respiratory illness, skin lesions, and other symptoms are so common amongst those who participated in the Deepwater Horizon disaster response that they are locally known amongst Gulf Coast residents as “BP Syndrome.” And, according to ALERT director Dr. Riki Ott, two decades ago, after the 1989 Exxon Valdez spill, “response workers called the ubiquitous cold- and flu-like symptoms among frontline workers ‘the Valdez Crud.’”

“It turned out that these symptoms were early warnings of chemical illnesses that often led to disabling diseases, cancers, and early deaths,” Ott said in a statement. “Exposed children were among the victims. This ruling means we just might be able to prevent a similar human health tragedy during the next big oil spill.”

Jorey Danos is a lifelong Gulf Coast resident who helped with the BP Deepwater Horizon disaster response and who says he continues to experience long-term health impacts from being exposed to toxic chemical dispersants. Holding the federal government accountable to update regulations governing oil-spill response felt like “trying to fight a fight that you can never win because of big corporations, big oil,” he told the Journal in April.

But, as Kristen Monsell, oceans program legal director at the Center for Biological Diversity, said in a statement, the court’s decision is “a great win in the fight to protect people and marine life from toxic oil dispersants.”

This decision follows an earlier ruling from June 2020 in which Judge Orrick found that the Clean Water Act imposes on the EPA a legal duty to update its response plan for oil spills in order to reflect current science. Now, Judge Orrick has ruled that the EPA violated that duty by failing to update the regulations on the NCP for over 25 years, despite significant advancements in scientific knowledge since 1994. The agency was also found to have violated the Administrative Procedure Act by failing to finalize draft regulations issued in 2015 in a timely manner, while two petitions by plaintiffs requesting updates to the NCP sat in limbo.

The court ordered the EPA to update and finalize its regulations by May 31, 2023.

“Offshore drilling is inherently dirty and dangerous, and it should be phased out,” Mosnell said. “But while it continues, we need smart spill responses that use the best available science. Oil spills are bad enough. We can’t have the EPA adding insult to injury by allowing the use of harmful chemicals afterward that put wildlife and people at even more risk.”