The mesas of Monument Valley rise deep red on the horizon. We are in Diné Bikéyah, land of the Navajo.

“This is John Wayne country,” trained Navajo guide Gregory Holiday repeats his lines for an enchanted group of tourists. The view opens boundless to the sacred land of the Diné people, but for visitors it is presented as the iconic west of cowboys and Americana. 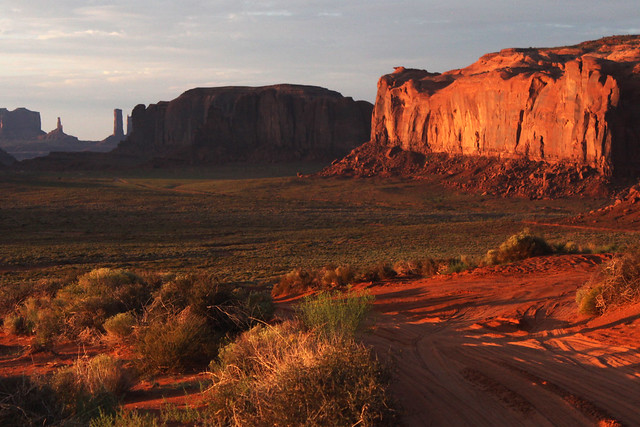 The sun sets and the last traveler boards the bus to leave Navajo Nation and head back to Flagstaff and into US-governed territory. With the bus’ departure, Gregory’s role as the light-hearted Indian guide ends. We take a gravel road to his home in the village of Oljato. During the jolty ride the rehearsed stories of Wild West heroes shift to memories of deceased loved ones.

“My daughter loved to ride her motorbike in the desert,” he says.

Two years ago Gregory’s daughter died of lung cancer. Her child, Gregory’s granddaughter, was a victim of Navajo neuropathy, a rare condition named after the only population in which it occurs. For those suffering from the disease, limbs begin to tingle, then lose all sense of touch, and eventually appear curled as claws. Ultimately, the victim dies of liver failure. One study put the average age of death at 10. First described in medical literature in 1976, there is no cure.

In the 1940s, surveyors discovered significant uranium deposits throughout the once worthless desert landscape of the reservation. Between 1944 and 1986, as the US government aimed to cut off all dependence on imported uranium, nearly 4 million tons of ore were extracted to fuel the Cold War nuclear arm’s race. With the end of the war, the mining companies moved out. They were not required to clean up their mess and left behind the legacy of their extraction efforts, including mining waste and abandoned mines. 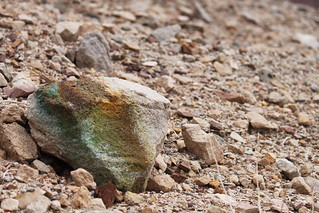 The incidence of Navajo neuropathy is five times higher on the western side of the Navajo reservation than on the eastern side. Some researchers believe this discrepancy is linked to the land: On the western side, the mines were mostly tunnels, whereas in the west they were primarily open pits. After the uranium companies left, the unfilled pits started to fill with water. Some, as deep as 130 feet, eventually formed into small lakes. Unsuspecting Navajos and their livestock use the contaminated water for drinking.

A 1990 study of Navajo neuropathy ruled out water contamination as a possible cause of the disease. However, that study has since been cast into doubt. In 2006, the Los Angeles Times reported that the study “did not fully consider the role of uranium mining.” Interviewed for the LA Times story, Steve Helgerson, lead scientist for the study, said his team had ruled out water contamination because families impacted by Navajo neuropathy were supplied by multiple water sources. He said the team did not explore whether these multiple sources shared common contaminants.

As the Los Angeles Times also reported, in 1986, Thomas Payne an environmental health officer for Indian Health Services, along with a National Park Service ranger, took water samples at 48 sites surrounding Cameron, AZ, a town in Navajo Nation. These samples revealed uranium levels in wells as high as 139 picocuries per liter. In abandoned pits, the levels were as high as 4,024 pinocuries. The EPA limit for safe drinking water is 20 picocuries per liter. At the time of his study, Helgerson was not aware of these results.

No further studies have been conducted on the possible links between the environment and Navajo neuropathy. The source of the illness remains formally unknown, although similar symptoms were seen in the children of Chernobyl and in the victims of Minamata disease in Japan, both caused by environmental factors.

Conditions in Holiday’s hometown, Oljato, resemble those of a third world country. Residents have limited access to clean water and live in houses constructed of uranium-contaminated gravel.

Six abandoned uranium mines that still emit dangerous gamma rays surround the village. In 2014, the EPA scanned almost 500 mines across Navajo Nation for radiation; the majority measured levels at least 10-times greater than background radiation levels, some as high as 25-times background radiation. Many of the highest radiating mines were found to be located within a quarter-mile of inhabited structure.

Gregory draws a deep breath through an oxygen mask attached to a tank standing beside his couch. A few years ago he also was diagnosed with a now common occurrence in Navajo Nation, lung cancer.

In the 1950’s, cancer rates in the Navajo population were so low that the people were thought to be immune to it. An article titled “Cancer immunity in the Navajo” was published in a medical journal in 1959. A decade into the mining era, cancer rates had more than doubled. According to a report by the Navajo Epidemiology Center, by 2004, cancer had become the leading cause of illness and death for the Navajo, a generally nonsmoking population.

“Everything here makes us and the animals sick,” Gregory said.

In his youth, Gregory was one of thousands of Navajo men lured to work in the uranium mines and mills. For him, as well as many others, employment as a miner or millworker was his first contact with the US wage economy. At the time, the miners were grateful.

But the Navajo saw little of the huge profits from uranium. Copies of miners’ pay stubs show payments of minimum wage or less: wages varied from an hourly $0.81 to $1.00.

Moreover, in 2011, journalist Judy Pasternak reported in her book Yellow Dirt: A Poisoned Land and a People Betrayed that the miners suffered radiation exposure four times that of the Japanese targeted by nuclear bombs during World War II. Navajo language had no word for radiation and few Navajo people spoke English before the mining began. Officials knew uranium exposure posed serious health risks but made no effort to educate their workers. Protective clothing, masks or ventilation were never provided. Miners returned to their families daily with clothes covered in the yellow dust of uranium.

“Others working with me died a long time ago” Gregory says.

The table is set with traditional Navajo soup made from Gregory’s family’s sheep. His is a story not heard by the 400,000 annual tourists crossing Monument Valley off their bucket list just 10 minutes out of town.

Today, more than 1,200 uranium mines lay abandoned within the borders of Navajo Nation. Some are barred with rubble, but most are left exposed.

The task of cleanup is daunting. EPA coordinator Lillie Lane told me the cost to clean just two mines is estimated to be $131 million. Navajo Nation EPA is currently researching and identifying the mining companies responsible for the waste. The paper trail is long, but under the Superfund Act, these companies can be held accountable for the cost.

“It is going to take 100 years,” said Lillie Lane, referring to the task of tracking down the responsible parties.

Last week, those working to clean up the mining waste received a boost from the federal government: The Justice Department announced that the US will place $13.2 million in a trust to pay for the evaluation of 16 abandoned uranium mines on Navajo land. The contribution is part of a settlement agreement with the Navajo Nation.

In the meantime, fragile communities continue to live amid the poisoned wells and contaminated earth, and the uranium riddled sagebrush flats are home for the next generation of Navajo children. That is, at least until those responsible are held to account and the landscape is restored to what it once was, before profits were prioritized above the land and its people.