15 of the world’s 22 albatross species are at risk of extinction, but they can be saved
Carole Knight

Using an albatross as a central motif for his epic poem, The Rime of the Ancient Mariner, the English poet Samuel Taylor Coleridge explored the theme of unintentional and dire consequences being brought about by a wilful act of desecration of the natural world. Coleridge’s mammoth poem entrenched the albatross as an enduring symbol in the myths and legends of maritime lore. More than two centuries later, with 15 of the world’s 22 albatross species at risk of extinction, the albatross metaphor is still deeply relevant. 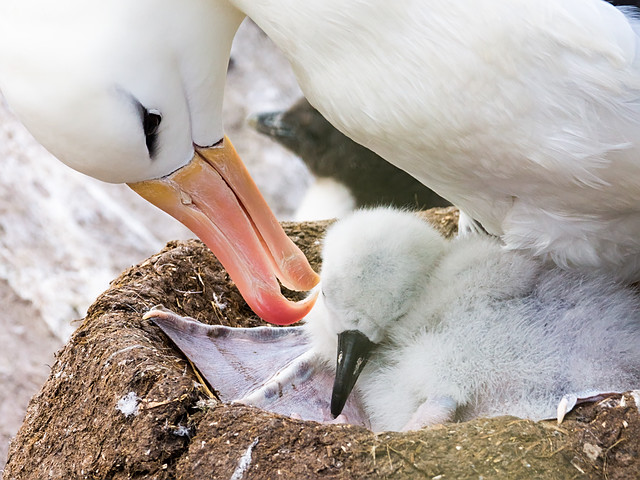 Photo by David CookA black-browed albatross and her chick in a natal colony in the Falklands Islands. These magnificent long-distance ocean birds live primarily at sea, travelling thousands of miles to find food and only returning to large natal colonies at islands like the Marion and Prince Edward Islands, Falklands Islands,and Tasmanian Islands, to breed.

Albatrosses are the largest flying birds on earth. At more than 11 feet from tip to tip; their wingspan is the largest of any bird species. Most albatrosses are only found in the Southern Hemisphere. These magnificent long-distance ocean travellers live primarily at sea where they forage and rest on the ocean waves, travelling thousands of miles to find food, and only returning to large natal colonies at islands like the Marion and Prince Edward Islands, Falklands Islands, Gough Islands, Tristan da Cunha, Tasmanian Islands, Crozet Islands and Kerguelen Islands, to breed. Exceptionally long-lived, albatrosses may live for 60 years or longer, and a pair bond may last for life.

Seabirds as a whole, and albatrosses in particular, are among the most threatened groups of birds in the world. The single greatest threat facing many seabird populations today is accidental deaths from fishing. More than 300,000 seabirds, including 100,000 albatrosses, are caught each year by tuna longline fleets and trawl fisheries.

When fishing vessels process their catch on board, they often discard unwanted heads and gutted fish off-cuts, throwing them overboard. This practice attracts albatrosses and other scavenging seabirds, which then become entangled in the fishing lines and the thick cables that attach large trawling nets, and drown. The birds may also strike the trawl cables while in flight, sustaining serious injuries such as broken wings.

These deaths at sea are especially devastating for albatross populations. When a foraging albatross which has left a brooding partner and chick on land dies, the dependent birds may also starve to death waiting for their food. And because albatrosses have delayed sexual maturity and produce few offspring, modest increases in adult mortality rates can cause substantial population decreases.

However, despite the staggering numbers surrouding albatross deaths, recent successes in mitigating bird deaths in South Africa’s largest fishery, the hake trawl fishery, leave room for hope. A recent study by BirdLife South Africa, has found a huge reduction in albatross and other seabird deaths within the South African hake trawl fishery over the past seven years. These reductions were made possible by a single mitigating measure — a bird scaring line. 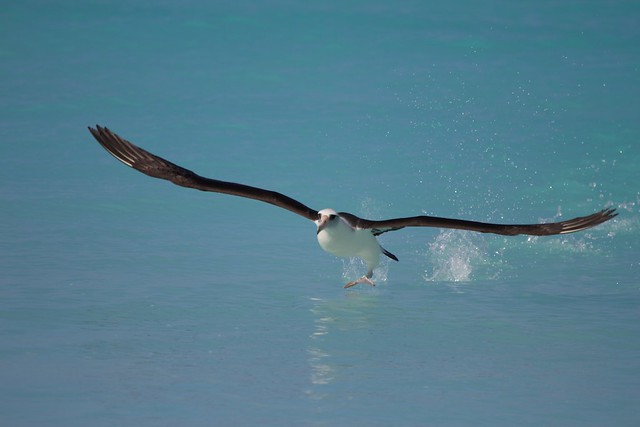 Photo by HarmonyonPlanetEarth/FlickrA Laysan albatross. At more than 11 feet from tip to tip, albatross’ have the largest wingspan
of any bird species.

A trawler’s bird scaring line consists of an 80-foot main line of strong rope with six or seven paired streamer lines of a lighter, visible material, attached at 6.5 feet intervals. The main line is secured to, and deployed off, the stern of the moving vessel. The paired streamer lines, which hang downwards from the main line, distract and confuse seabirds enough to keep them away from the trawl cables, thereby preventing entanglement and drowning. Although deployment of bird scaring lines has been mandatory in the South African hake fishery since mid-2006, compliance was not widespread until recently.

With an annual catch of 130,000 to 150,000 tons, the deepwater hake trawl fishery, which targets Cape hakes, is South Africa’s most economically valuable fishery. In 2004 it became the first fishery in Africa to obtain Marine Stewardship Council Certification. The certification has been instrumental in spurring industry efforts to reduce albatross and other seabird deaths.

In 2006, through the efforts of BirdLife South Africa, South Africa became the first country to establish its own country-focused Albatross Task Force (modeled on the international Albatross Task Force, formed in 2005 by the Royal Society for the Protection of Birds and BirdLife International, which comprises a team of dedicated instructors who work directly with fishermen to address the global threat of albatross extinction.) The South African ATF has been instrumental in increasing the use of bird scaring lines, instructing local fishermen in their use, underscoring their affordability (less than $100 US dollars per line), and demonstrating their effectiveness at reducing seabird deaths from cable interactions. (On June 24, the team was awarded the first prize for “Green Technology” at the Mail & Guardian Greening the Future Awards.)

The South African ATF team has also supported fishermen in adopting other measures to reduce seabird bycatch, including setting lines at night so that seabirds can’t see baited hooks, reducing deck lighting, and weighting lines so that they sink. As a result, South African longline fisheries have reduced incidental seabird mortality by 85 percent within the industry. The South African hake trawl fishery has seen especially dramatic results, reducing seabird deaths by 90 percent and albatross deaths by 99 percent. (The video below shows the effectiveness of the bird scaring line in keeping birds away from one of the trawl cables on a South African deep-sea trawl vessel.)

According to Bronwyn Maree, who is one of the longest-serving ATF team members, seeing the transition among fishermen has been especially rewarding. “It has been incredibly special to be out on the boats with the fishermen as they realise how amazing an albatross is — in fact some skippers have even taken up photographing albatrosses while out at sea through our work,” says Maree, who was conferred the prestigious international Future for Nature Award for young conservationists in April. “This project is also an excellent example of how collaboration between government, environmental NGOs and fishing corporations can result in hugely significant conservation successes!”

The bird scaring lines are made through a collaborative project between BirdLife South Africa, Total South Africa, and Ocean View Association for Persons with Disabilities (OVAPD). Each line is made in under an hour by a team of eight men and women with various intellectual and physical disabilities. Deborah Gonsalves, manager of the OVAPD centre, says: “The bird scaring line project is very important to us because it helps to sustain the centre and the fact that we are helping to save seabirds is quite a feather in our cap. It proves that people with intellectual and physical challenges can still have something to offer, doing good to save the environment.”

Saving thousands of albatrosses and other seabirds through bird scaring lines is a conservation success story that has resulted in a profound paradigm shift, not only for hake trawler skippers, but also their sea-going crews. The project is also helping the men and women of OVAPD to maintain dignity and independence. Isn’t this win-win equation what conservation should be all about?