The Japanese concept of Shinrin-yoku, or “forest bathing”, is now supported by a growing body of research
Kendra Pierre-Louis

It starts subtly. Your pulse slows slightly… slightly. Not enough to stop taking your blood pressure pills, of course, but enough that you almost forget to take them.Then the persistent eye twitch you’d feared signaled some malevolent disease, but which your doctor assures you is “just” stress, fades away. You hardly notice. You’re absorbed in watching the way the sunlight dapples the forest floor, listening to the deep swelling call in the background (is that a duck or a frog?). You breathe deeply, filling your nostrils with a heady mix of oak, pine, pollen, and the distinctive earthy smell of humus. Now imagine that this visit to the forest was medically prescribed. 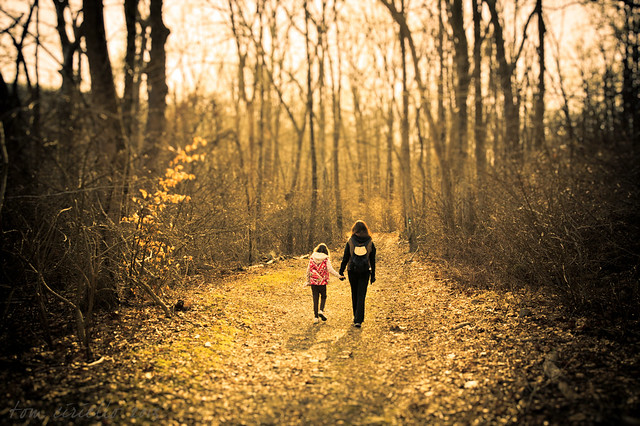 photo by tciriello, on FlickrStudies have shown that forest environments promote lower levels of cortisol (the stress hormone), lower pulse rates, and lower blood pressure. A stroll through nature can improve concentration as well as mood, and these benefits extend even to participants with major depressive disorders.

For as long as we‘ve cloaked ourselves in cities, there have been those contrarians – writers, poets, and naturalists – exalting natural spaces, likening forests to cathedrals, and hikes to prayer. Their sentiment has often been met with eye rolling criticism, but in Japan, this casual practice of strolling through the woods has received scientific – and medical – approval. What the Japanese call Shinrin-yoku or “forest bathing” has, since the 1980’s, been supported by a growing body of research linking a whiff of forest air, or a ramble through a green space, to a form of inoculation against stress-related disorders like anxiety, depression, and anger, as well as diseases like diabetes and cancer.

One of the earliest studies on this topic, published in 1984, found that simply looking at green spaces through a window increased the post-operative recovery rate of surgical patients when compared to the recovery rates of patients whose windows faced a wall. More recently, studies have shown that forest environments promote lower levels of cortisol (the stress hormone), lower pulse rates, and lower blood pressure. Recent studies have also found that a stroll through nature can improve concentration as well as mood, and that these benefits extend even to participants with major depressive disorders.

Although a saunter through the woods or a ramble through a meadow can be as mood altering as Prozac (but with fewer side effects), Americans are still retreating to the diminutive indoors at record numbers. “Across the board, there has been a decline in the amount of time we’re spending outdoors,” says Jane Chang, program manager of health and environment at the National Environmental Education Foundation. According to the US EPA, Americans spend, on average, 90 percent of their time indoors, where concentrations of certain pollutants can be two to five times higher than outdoor concentrations (and up to 100 times higher in some cases).

Nowhere, perhaps, is the situation as stark as it is with America’s children, who experienced a 50 percent decline in the amount of time spent playing outdoors between 1997 and 2003 “There has been a cultural shift, where our parents and our grandparents went outside, but it’s skipped a generation,” says Kristin Wheeler of the California Bay Area-based Institute at the Golden Gate, an organization that works to get people outside and onto public lands. “You talk to kids now and they’re so resistant to getting outside.”

Jane Chang, whose organization trains medical professionals to incorporate pediatric environmental health into their healthcare practices, adds: “At every training, there’s always someone who will raise their hand and say that when they were young their parents would say go outside and play and they wouldn’t return home until dinner time. That isn’t true anymore.”

Nature and outdoor play provide stress relief, social competence, problem solving, creative thinking, and safety skills for children. It can also impact their physical development. Seventy percent of American children have low levels of vitamin D, a deficiency that can cause rickets, and which is easily ameliorated by as little as 15 minutes of sunlight a day. Spending so much time indoors can also stunt proper eye development in children, causing a surge in extreme nearsightedness and increasing the risk of retinal detachment, glaucoma, early-onset cataracts and even blindness in adulthood. 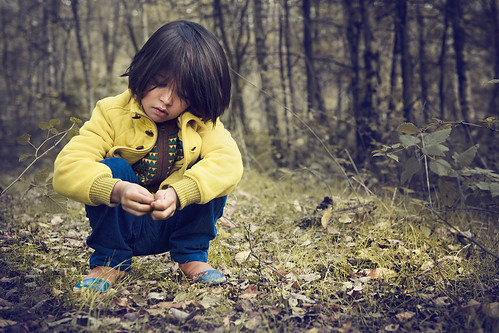 photo by Philippe Put, on FlickrIn the past 15 years, the amount of time children in the United States spend playing outdoors
has declinced by at least 50 percent. Now several countrywide programs are trying to get
Americans to spend more time in nature.

While Japan’s forestry department has designated more than 48 official “Forest Therapy” trails, and South Korea’s government has devoted more than $140 million dollars to a new National Forest Therapy Center slated to open this year, the United States is taking a different approach. Motivated by the nation’s ailing health, as evidenced by the rise in obesity related health problems, a growing number of nonprofits, governmental organizations, and community groups are working together to get Americans outdoors – and active.

Two of the largest programs designed to get Americans outdoors are the National Park Service’s Healthy Parks, Healthy People program, and Park Prescriptions, a collaborative effort by the National Recreation and Park Association, the Centers for Disease Control and Prevention, and the Institute of the Golden Gate. Both of these programs work to link the medical system and social concepts of health and wellbeing with public lands like national and local parks. “It’s a way for the parks to stay relevant,” says Wheeler.

The National Parks Service’s own statistics show that Americans are visiting parks less often and that they are spending less time in the parks when they do visit. “If people don’t have a connection to parks and nature, then people won’t vote for park bonds and they won’t vote to protect these spaces,” adds Wheeler. “People who have strong links to the outdoors become lifelong environmental stewards of that place, which has repercussions outside of just protecting parks.” They’re also happier.

Parks Prescriptions works by training medical practitioners to conduct assessments regarding how much time patients are spending outdoors, in addition to checking traditional indicators like blood pressure and weight. If they’re not spending an adequate amount of time outdoors – and most patients are not – they’re given a park prescription. A park prescription includes information about parks that are close to where patient lives, and where staff have been trained to provide free, action oriented activities. Healthcare practitioners also work with patients to understand and overcome any initial resistance they might have to the prescription. “[Many] people claim they don’t have enough time,” says Wheeler. “To that, we ask them to eat dinner outside, or to walk to the office. Some barriers are systemic and local so we work with communities to address those.”

DC Park Rx, a community health initiative in Washington DC, provides one example of a park prescription effort. The initiative has created a tool that allows DC residents to search 350 parks and green spaces and filter based on proximity, cleanliness, accessibility, exercise level, aesthetics, and safety. The goal isn’t to get everyone running marathons, but rather to tackle unhealthy habits by getting people outside. As Wheeler says: “We’ll know that our work is complete when nature and parks come up first, or at least alongside, a pill when people visit a doctor’s office.”