A New Challenge for Wilderness: To Intervene or Not to Intervene?

What does “untrammeled” mean in the Anthropocene
Joshua Zaffos

In northern Idaho and Montana, whitebark pines are “keystone species” that play essential ecological roles in high-country forests. They are among the first plants to establish following a fire or landslide, creating shade that nurses other trees’ growth, and helping to reduce snowmelt, soil erosion, and avalanche risks. Grizzly and black bears gorge on their large seeds – the size of big popcorn kernels – and Clark’s nutcrackers and other birds and red squirrels cache the seeds for winter stockpiles. 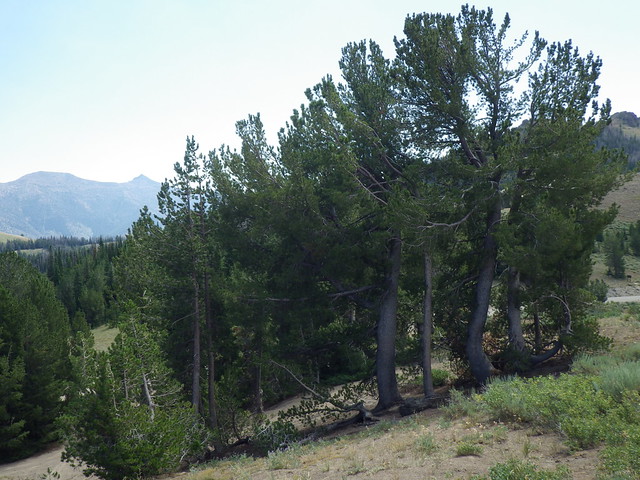 The trees are also, however, in danger, and today are an official candidate for protection under the Endangered Species Act. White-pine blister rust, a non-native fungus, infects more than two-thirds of whitebark and other pines in the region. The rust kills trees, curtails seed production, and leaves forests, potentially already weakened by climate change, more susceptible to fires and other insect outbreaks.

Amid this threat, it’s perhaps some relief that nearly half of whitebark pine stands are protected within national wilderness areas, where industrial activities are prohibited. The Wilderness Act first recognized and designated such areas 50 years ago this month, defining wilderness as large tracts of land of “primeval character and influence, without permanent improvements or human habitation” and “where the earth and its community of life are untrammeled by man.” But wilderness boundaries have done little to slow blister rust. In fact, wilderness protections may even constrain efforts to control the rust’s spread.

Some whitebark pines have shown a genetic resistance to the rust, leading researchers to breed and plant trees that can withstand the blight. But that confronts researchers with an unusual dilemma, says Beth Hahn, of the Aldo Leopold Wilderness Research Institute. In areas protected as “untrammeled” and where planting is typically prohibited, should managers make exceptions and directly manipulate landscapes – particularly if we’re indirectly causing harm through invasive organisms, fire suppression, and climate change?

Such decisions are part of the raging debate facing wilderness advocates in the Anthropocene epoch in which human impacts have intermingled with and overtaken natural processes. Taking action to protect whitebark pines seems like a no-brainer, but at what point does action – even in the name of restoration – diminish the qualities of wilderness itself?

“The science is the relatively easy part of restoration ecology in wilderness,” Hahn says.

The modern wrinkle for wilderness managers stems from a divide between the concepts of “naturalness” and “wildness,” which seemed in sync 50 years ago. Wilderness protection has largely meant establishing boundaries (with the authorization of Congress) that bar industrial, motorized and mechanical activities, and letting nature take its course, whatever that may be.

But in the intervening decades, researchers have gained a better understanding of how ecosystems function, and how Indian tribes in pre-contact America used fire and other means to alter vast forests, grasslands and deserts that white settlers and American environmentalists deemed wild. Climate change effects also demonstrate that even across expansive roadless and undeveloped areas, humans can still impact and degrade environments.

Wilderness managers are left pondering how they should try to preserve and restore “natural” landscapes. Should we preserve places in a state as they were when European settlers first arrived on the continent? Or as “wild” spaces, without modern human intervention of any sort, whitebark pines and keystone species be damned?

In the Northern Rockies, scientists are confident that planting blister-rust resistant whitebark pine trees could, despite the trammeling, boost the species’ persistence – and help sustain the natural environment and wildlife that define the region’s wildlands. A 2010 Forest Service pilot project planted 34,000 rust-resistant whitebark pines on 150 acres on the Clearwater National Forest in Idaho. Some of that may have included designated wilderness, although agency databases for such projects don’t include those details, according to Hahn. Inaction in other areas could mean whitebark pines disappear from forests, setting off a cascade of impacts that could reduce food for wildlife, increase soil erosion, and diminish water quantity and quality.

“These kinds of tradeoffs are inherent to wilderness stewardship,” Hahn says. She and colleagues at the Leopold Institute have developed a decision-support framework and evaluation tool for wilderness managers to help them navigate restoration decisions and decide when action is appropriate.

Hahn, who spoke on the topic at the North American Congress for Conservation Biology this July in Missoula, Montana, says the case for whitebark pine restoration is relatively straightforward for wilderness and land managers since we know the threat and the options for protection. Other intervention decisions could prove more intrusive with less certain outcomes – while also opening the door for more exceptions to wilderness management.

For example, in the Cabeza Prieta National Wildlife Refuge in southern Arizona, managers have maintained artificial watering holes in designated wilderness to help desert bighorn sheep and mule deer, requiring constant maintenance and motorized trips to sites. Inside Joshua Tree National Park, officials are considering transplanting entire groves of the namesake trees to higher elevations within wilderness so they might weather hotter temperatures and climate change.

Researchers question whether such intervention actually benefits keystone wildlife or environments in the wilderness – or whether we can truly understand the effects. In ponderosa pine forests in the northern Rockies, Eric Keeling, an ecology professor at SUNY-New Paltz, and others have studied how excluding or allowing fires and logging affect the growth and density of forests, comparing management across wilderness and other public lands. Keeling found that the different management regimes had no predictable effects on ponderosa stands’ health – despite anecdotal concerns that untreated wilderness forests were excessively dense and more prone to catastrophic wildfires. Also speaking during the Conservation Biology Congress this July, Keeling simply concluded, “Management can have unforeseen consequences.”

The creep of exceptions and special provisions in wilderness also extends to recreation management in the twenty-first century. Campaigns and legislation to allow mountain biking, motorized and off-road vehicle use, and promote large events, such as ultra-marathons, could significantly alter the solitude and protection of wilderness areas. Such efforts are splintering past coalitions that have previously supported wilderness since, for instance, new designations could place favorite singletrack routes off-limits to bikers. One bill – HR 4089, which passed the House of Representatives in 2012 – would open the door for ORV use, new aircraft landing strips and pads, and roads if they are deemed “measures necessary” for hunting, fishing, and wildlife conservation activities.

Meanwhile, new wilderness designations have been few and far between in the last two decades, partly due to political polarization in states and Washington, DC. New designations now almost exclusively come through quid pro quo compromises that protect some acreage as wilderness while releasing and even selling off other large tracts of public lands for development.

The trend is concerning to many, including Martin Nie, director-elect of the Bolle Center for People & Forests at the University of Montana. Compromise bills are Pyrrhic victories that create wilderness at the expense of other federal parcels, including other wilderness-eligible areas, Nie says, while also opening the door for “opponents to keep asking for absurd provisions.”

That would be a shame in an era of increasingly scarce solitude and fewer untrammeled spaces. The world has changed drastically in five decades. Just consider our expanded scientific and ecological knowledge, the rise of global climate change and the spread of invasive species, the advent of computers, cell phones, the Internet and GPS. Other inconceivable changes no doubt await us in the next half-century and beyond. But it’s almost certain that both natural and wild places will face threats and development, and continue to shrink.

In the meantime, the ecosystems of 109 million acres of designated wilderness areas and another 58 million acres of unprotected-yet-eligible roadless lands are clearly changing, and resource managers certainly have a role in protecting and restoring these landscapes. But a deft hand and light footprint are required. Managers, by their very name, have a bias toward action, says Beth Hahn, so restoration and other projects need to guard against heavy-handed urges.

“I would never describe wilderness ecosystems as pristine – I think that misleads people – but they’re relatively untouched areas compared to other types of land and they’re really important for scientific understanding,” says Hahn. “So if we’re doing a whole lot of restoration in them, the notion of wilderness as an ecological baseline becomes much muddier.”