At the 2014 Fossil Fuel Divestment Convergence, students renewed their pledge to dig deep, link up, and take action
Daniel Adel

Last Thursday, anti-apartheid icon and Nobel Peace Prize winner Desmond Tutu came out with an article calling for an “apartheid-style boycott to save the planet.” Tutu says we can halt climate change if we use the tactics that worked in South Africa against the worst carbon emitters: fossil fuel companies. This was followed by news on Saturday that Pitzer College in Southern California had come up with a breakthrough climate action plan that included divesting its holdings from fossil fuels by the end of the year. 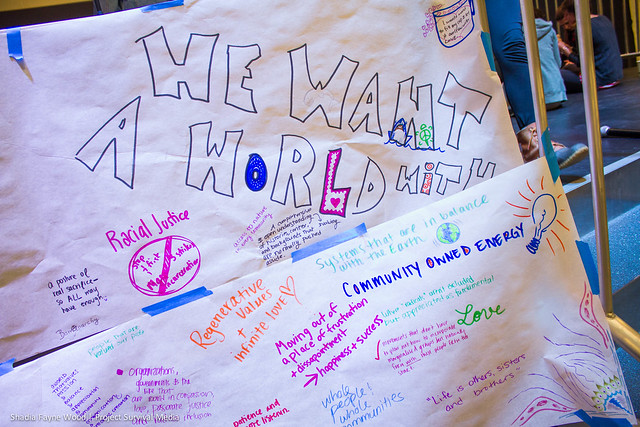 It was colleges and universities that spearheaded divestment during the apartheid era. Today, in the face of catastrophic climate change, the tactic is once again being championed by colleges and universities. Over the past two years, students on hundreds of campuses have launched campaigns demanding that our endowments no longer be invested in the fossil fuel industry. The movement has garnered success at numerous institutions and has fostered collective planning and action between campuses.

Earlier this month, from April 4 to 6, more than 200 students from across the United States and Canada gathered at San Francisco State University (SFSU) for the 2014 Fossil Fuel Divestment Convergence. It was a time for to us to dig deep, link up, and take action. These three threads were the core threads weaving through the fabric of our convergence. This gathering was second annual student-led Fossil Fuel Divestment Convergence. The first took place at Swarthmore College early last year.

Coordinated by the Fossil Fuel Divestment Network — which was formed just over a year ago as a platform for building solidarity across campuses — and the California Student Sustainability Coalition (an Earth Island Institute project), the event was organized to cultivate youth organizing capacity and leadership on climate justice. The convergence featured diverse speakers and panels on social justice and environmental and new economy communities that helped guide us as climate organizers and showed us how to challenge prevailing assumptions about the fossil fuel divestment movement. Organized around “collective liberation” and economic transformation, the convergence was testament to a new kind of momentum in the climate movement, and to the radicalizing pull of the call to divest.

Day one began with cheerful and excited young faces gathered before a stage during the welcoming ceremony. Students and recent alumni, each representing their own campaigns and strategies to address the growing climate crisis, introduced themselves to share their wisdom with one another. 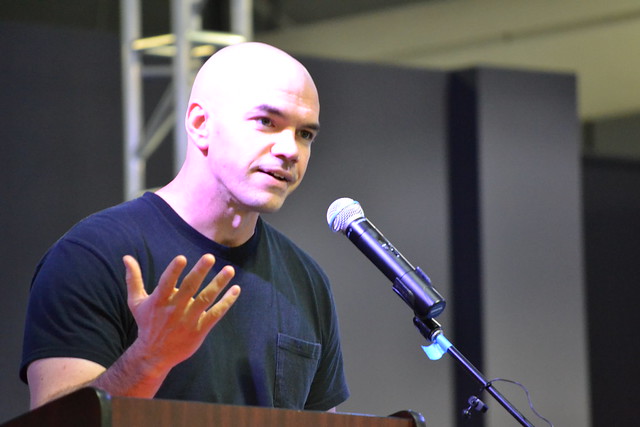 Photo by Sonny Lawrence D. AleaThe future of young people has been put at risk for the sake of short-term profits, said
Tim DeChristopher, one of the key motivational speakers at the event.

The evening plenary featured an array of motivational speakers, closing with a speech by Tim DeChristopher, founder of Peaceful Uprising. Saying that the future of young people had been put at risk for the sake of short-term profits, DeChristopher had some harsh words for the baby boomer generation, whom he called “complacent” and too vested in “compromise” over the well being of the planet and future generations. “The job of students in the climate movement is to be the uncompromising moral of truth,” he said. DeChristopher challenged the crowd to share their anger and to confront those standing in the way of climate justice. “This anger is really a manifestation of love,” he said. “Anger that something isn’t right and that we want to fix [it]”

Henia Balalia, an organizer and former director of Peaceful Uprising, led a workshop rooting the climate crisis on overlapping systems of oppression. She stressed that environmental degradation was being exacerbated by existing economic, racial, and social injustices — an interconnectedness that should define our understanding of the climate crisis and our response to it. We must build movements across issues and beyond divisions based on race, class, and gender and elevate voices that have been historically marginalized. Doing so, she says, will lead to a profound “decolonization of minds and institutions.”

Bay Area activists Barnali Ghosh and Anirvan Chatterjee led a similar workshop. They stressed that the effects of climate change are global, yet profoundly unequal. Countries like Bangladesh and Maldives risk going underwater despite having contributed very little to the crisis. Ghosh and Chatterjee spent a year traveling around the world aviation-free in an effort to report on and learn more about the impacts of climate change across the world and possible solutions. Ghosh connected their and other environmentalists’ fight to curb aviation pollution to students’ divestment campaigns. Divestment challenges the “monolith” that is the fossil fuel industry, she said.

A second set of workshops featured speakers and panelists on issues pertaining to organizing strength. 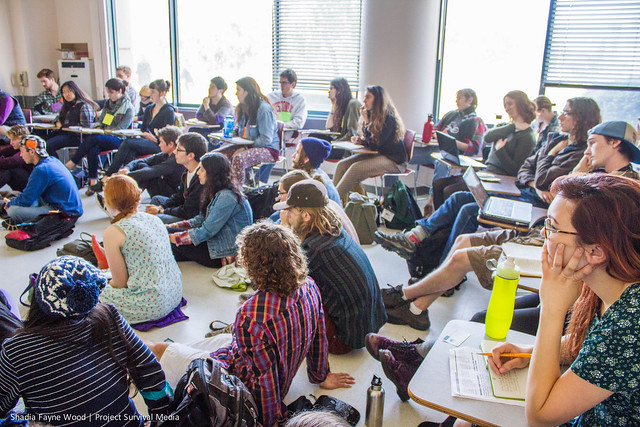 Photo by Shadia Fayne WoodMore than 200 students from across the United States and Canada gathered at the three-day
convergence.

Gopal Dayaneni of the justice and ecology group, Movement Generation led a workshop called “Weaving the Fabric of the Next Economy” where he challenged the framing of the divestment movement. Rather than to look to the atmosphere as the source of our troubles, we should look down at ourselves — our human labor and military-industrial complex — to understand the climate crisis, he said. “Our job is to realign our economic well being with the principles of Mother Earth,” he said. As we oppose and expose the forces that are driving climate change, our job is to make a “just transition” away from an economy based on extraction and towards ecological restoration. Dayaneni urged us to invest in an economy that is “decentralized, democratized, and diversified,” one in which consumption is reduced and wealth is redistributed.

Later in the day, Christine Cordero of the Center of Story-based Strategy led all-convergence training on narrative power analysis. Dubbed “Winning the ‘Battle of the Story’ for Climate Justice,” the training could be summed up by one line: “It’s not about what we don’t know; it’s about what we already know.”

“Humans are narrative animals,” said Cordero, who addressed the power of the stories in shaping our understanding of the world around us. People have a tendency to take what’s meaningful over hard truth. Indeed, when it comes to the climate, the reports we read or see often shroud the negative impacts to frontline communities and the threat to future generations. Cordero says understanding how to win the “battle of the story” for public opinion is critical to all our efforts as organizers, advocates and communicators to make positive change.

Day three was themed around the next steps for the divestment movement. Students divided up into affinity groups to network and strategize, with the goal of laying foundations for long-lasting networked relationships between campaigns and organizers. As the day came to a close, many left with a shared feeling of optimism.

Prianka Ball, a Bryn Mawr College student who’s originally from Bangladesh, says her experiences back home mobilized her around climate issues and led her into the fossil fuel divestment movement. Ball has previously worked with the Bangladesh Youth Environmental Initiative, a group that promotes awareness of local and global environmental issues, especially climate change adaptation, among Bangladeshi high school and university students. She said attending the convergence made her feel “more hopeful because there are other people working on the same issues as me.”

As a second-generation American whose family is from Bangladesh, I was especially moved upon learning of youth-led climate activism happening there. The efforts of Bangladeshis aren’t often heard of in the United States, even though it will be hit the hardest by the crisis.

Organizing around the looming climate crisis can be overwhelming. It can amount to days of slow, often, thankless work. Often, it feels lonesome — as though you are carrying the weight of the world on your shoulders. But the convergence reminded us that we are not alone in this fight. It was inspiring to see so many peers organizing around similar issues across the continent and the world.