In 2013, the residents of this small British village rallied to head off this threat. Now they are getting ready to fight it off again.
Adam McGibbon

In August 2013, a crowd of protestors snaked down a narrow country lane toward a drill site just outside of Balcombe, England. Anti-fracking chants were overlaid with the dull buzz of a police helicopter overhead — surely a first for this sleepy Sussex village. Legions of police officers dressed in helmets and stab-vests were also a novelty here, and posters opposing a 2004 ban on hound hunting, still stuck to the trees almost a decade later, reminded all who passed by that Balcombe was not the typical setting for an environmental march. 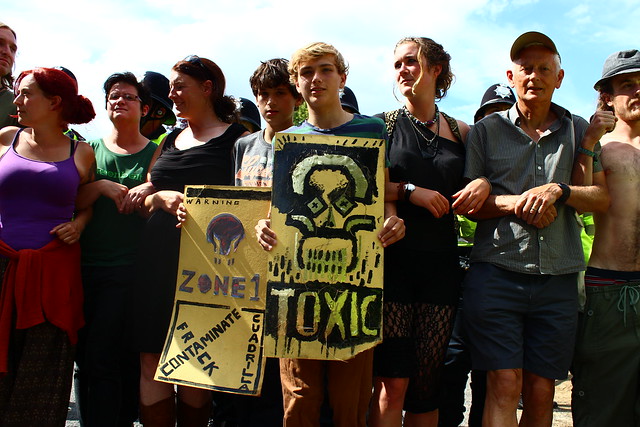 Photo courtesy of Push Europe/FlickrThe Balcombe protest in 2013 didn’t by any means start the British anti-fracking movement, but it helped to supercharge it.

A British fracking firm, Cuadrilla Resources, in its attempt to test-drill ahead of fracking in the rural heart of Sussex, had awoken an unexpected sleeping giant. It had also inadvertently sparked unlikely alliances in the region’s movement against fracking, which continues to grow today.

During the march, a local wine critic named Charles Metcalfe gave a rousing speech to the crowd, dispelling newspaper myths that the villagers didn’t want protesters in Balcombe, a village and civil parish in England’s West Sussex County. On the contrary, two surveys had confirmed the community’s overwhelming opposition to fracking, with one estimating local resistance at 90 percent. Metcalfe, who went on to become a major anti-fracking figure in the UK, said he’d learned about Cuadrillia’s plans for Balcombe while reading The Telegraph on a train. His speech was followed by another — made by a representative from the environmental direct action group, Reclaim The Power. The contrast was striking — rarely do Telegraph readers and radical environmentalists share platforms.

Anti-fracking drama continued to intensify in the weeks that followed, as hundreds of people engaged in direct action to stop Cuadrilla. A group of protesters, later nicknamed “the Sticky Six,” glued themselves to the doors at Cuadrilla’s PR firm, Bell Pottinger. (Bell Pottinger’s other reputable clients included the dictator of Belarus and the controversial Gupta family of South Africa, the firm’s racist campaigns for the latter leading to its own demise.)

The arrest of Green Party MP Caroline Lucas, for whom I served as campaign manager at the time, catapulted Balcombe onto the front pages of national newspapers. The trial of Lucas and four others, and their resulting acquittal, kept Balcombe in the headlines for months. Meanwhile, anti-fracking groups were springing up all over the country.

“This judgement is right — but it is not victory yet,” Lucas told a crowd of cheering supporters in front of Brighton Magistrates Court in April 2014, her co-defendants standing at her side. “We will continue to fight until fracking has been ended and our world is on course for a clean energy future.”

Cuadrilla ultimately pulled out of test-drilling at Balcombe, leaving behind a hardened national opposition to fracking and a group of Balcombe locals determined to transition their town away from fossil fuels, with some success.

Now, five years later, Cuadrilla has again been granted permission, against the wishes of local residents, to drill for oil at Balcombe. The company claims that its previous retreat from the site was due to a fall in oil prices, which have now recovered. In 2013, the firm thought it could convince villagers in this conservative region of the UK to let them ruin the local environment for private profit. Instead, they ignited a huge battle and then retreated. What do they expect will happen when they return?

No doubt, brave residents and their allies will once again rally to head off this threat. And one can only assume — and hope — that this deeply troublesome and frankly stupid move by Cuadrilla will end in disaster for them.

Balcombe didn’t by any means start the British anti-fracking movement, but it helped to supercharge it. Nationally, public opinion is even more against fracking than it was in 2013, with only 16 percent of citizens supporting this dangerous extraction process in 2017 — the lowest percentage since a government survey was launched in 2012.

Cuadrilla’s inept public relations is part of the reason why fracking has largely failed in the UK. In 2011, the firm admitted that its hydraulic fracturing caused two minor earthquakes near Blackpool. Opposition in Balcombe shook things up even more.

Determined individuals from all walks of life have hindered attempts to frack in other parts of England, such as Yorkshire, Lancashire, and Surrey, with police brutality against peaceful protesters shocking small communities

Over the last few years, people have become increasingly aware of fracking’s toxic effects on nature and human life. Contractors in some areas have refused to work with fracking companies because of the toxic reputation of this fossil fuel extraction process. Fracking companies are also having increasing difficulty acquiring bank loans,and fracking has been banned in the Republic of Ireland, Northern Ireland, and Scotland.

Fracking is a dying industry in the UK. Five years after it was hailed as a new gold rush for UK energy, it still hasn’t got off the ground thanks to the strength of the resistance and the plummeting cost of clean energy. By returning to Balcombe, Cuadrilla is starting a fight it can’t possibly win — and that may finish off fracking in this country for good.