A Coal Terminal in Oakland?

Activists, local residents are fighting a proposed coal export facility in one of the nation’s most polluted cities
Zoe Loftus-Farren

From Oregon, to Texas, to Washington DC, environmental advocates across the United States are involved in battles against fossil fuel infrastructure expansion. So far, however, northern California has largely escaped these big industry vs. activist showdowns. Yes, there have been protests in Oakland and marches in Richmond, but there hasn’t been a local Keystone to rally around. 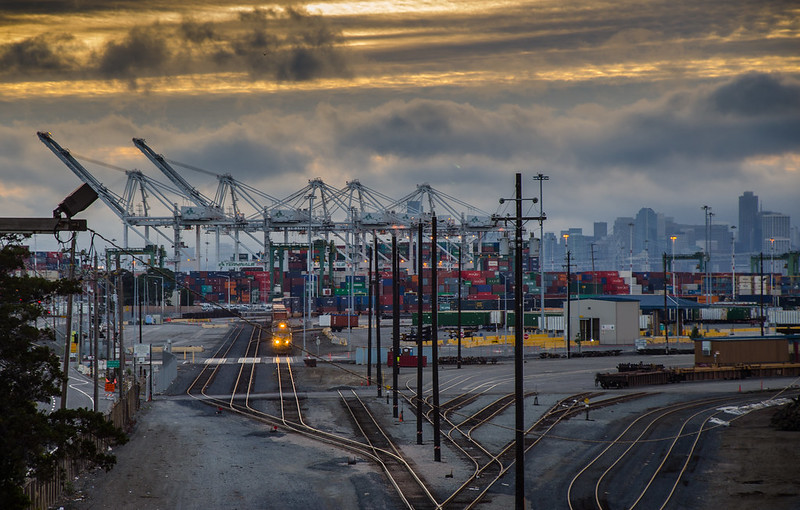 Photo by Russell Mondy The Port of Oakland. When the Port of Oakland rejected Bowie Resource Partners’ proposal for a coal export facility at the port, the company turned its sights upon the Oakland Army Base redevelopment project.

That may soon change if private developers in Oakland proceed with a plan to export coal through the old Oakland Army Base.

The history behind the proposed coal terminal is somewhat convoluted. Back in 2013, the Port of Oakland received two bids to construct coal export facilities at the port’s Howard Terminal. One of these bids — from a Kentucky-based coal company called Bowie Resource Partners — proposed a facility with the capacity to export 4 million tons of coal annually, as well as 1 million tons of petroleum coke. The second bid, submitted by by Kinder Morgan, Metro Ports, and California Capital Investment Group (CCIG), included a facility with a likely coal export element. The Port of Oakland rejected both proposals in 2014 based on environmental impacts and public health concerns, among other factors.

Working to expand coal mining operations in Utah, and facing slumping domestic coal sales, Bowie Resource Partners then turned its sights upon the Oakland Army Base redevelopment project as a potential option. The project, which was approved by the city in 2012, includes plans for a bulk commodity export terminal.

In April of this year, four counties in Utah were approved for a $53 million loan from the Utah Permanent Community Impact Fund Board (CIB). As the East Bay Express reported, the loan was intended for investment in the Oakland export terminal, in a process that was “driven by a secretive Kentucky-based coal company, Bowie Resource Partners.” In exchange for the proposed investment, the Utah counties would gain rights to 49 percent of the terminal’s annual shipping capacity, which would make the Oakland facility California’s largest coal export terminal. (In a sad, if ironic, twist, the CIB was established to help mitigate the impacts of natural resource development in Utah.)

The army base redevelopment project is being spearheaded by CCIG. Initially, many East Bay residents embraced the project as a source of jobs, but the revelation that it might include a coal export component has been met with outrage by those concerned about potential impacts on public health and the environment. Local advocates have sprung to action in a broad coalition of environmental justice, public health, labor, and faith-based groups opposing the plan.

Activists are especially concerned about the impacts of coal dust in an Oakland community that is already overexposed to particulate pollution. Among other health impacts, exposure to particulate pollution has been tied to respiratory problems, non-fatal heart attacks, cardiovascular disease, and adverse birth outcomes. Long-term exposure to toxic metals in coal has been linked to increased cancer risks.

“The case we’re making is that this is a health and safety risk, most immediately because of what they call fugitive coal dust, which is the dust that escapes off the railway cars” says Margaret Rossoff of the Sunflower Alliance, a Bay Area climate justice organization. The developers have said they will cover train cars carrying coal from Utah to Oakland, “but as far as we can tell, there is nowhere in the world where covered coal cars are in operation,” she says.

“Coal is dead,” Margaret Gordon, co-director of the West Oakland Environmental Indicators Project, adds. “We don’t need it. It causes too many health problems for so many different people worldwide.”

Activists are also concerned about the climate implications of continued reliance on coal, and the complicated impacts that global warming and rising sea levels could have on the health of Oakland residents.

“We are particularly worried because the development is right in West Oakland, which is already getting more than its share of pollution of all kinds,” Rossoff says. “So it’s a question of environmental justice that this particular community, which is already heavily, heavily impacted by the fossil fuel industry, would be [impacted] even more.”

When Phil Tagami, CEO of CCIG, first obtained city approval for the redevelopment project in 2012, he indicated that he was not interested in using the terminal for coal exports. But in a more recent public statement on the matter, he noted that CCGI’s development agreement with the city authorizes it to build “a facility capable of handling all foreseeable and legal bulk commodities,” including coal. This agreement predates an Oakland resolution that was passed in July opposing the transport of fossil fuels through the city.

Because the Oakland resolution was passed after the development agreement had been finalized, it does not automatically preclude fossil fuel shipments through the terminal. However, the development agreement does allow the city to apply new regulations to the project if the city determines, “after a public hearing,” that the failure to do so would place neighbors “in a condition substantially dangerous to their health or safety.”

The City Council held a public meeting on the health and safety impacts associated with a coal export facility in September, where, according to Rossoff, more than 600 people signed up to testify about the plan. The council is expected to announce its decision regarding the use of the terminal for coal exports on February 16 next year.

So far, at least three council members have expressed opposition to the use of the terminal for coal exports.

“West Oakland cannot be subjected to another dirty industry in its backyard,” Lynette Gibson McElhaney, president of the Oakland City Council, said in a press release. “I see coal exports as the Trojan Horse in the development of the Oakland Army Base — it is not the type of economic development that we want.”

Ted Nace, director of Coal Swarm — an Earth Island project that serves as an information clearinghouse for citizens’ movement to address the impacts of coal — is confident that environmental justice and public health advocates will ultimately prevail in Oakland. If anything, he thinks the Oakland proposal could help mobilize anti-coal campaigners in California. “It provides a campaigning target and helps the movement,” he says.