On a cold November morning, Lino Frizzo opens the doors to his father’s Venice bookshop, Libreria Acqua Alta. He begins to reorganize books inside the 11-meter-long gondola, which sits in the middle of the store. The sun enters through the backdoor, which faces the canal, an alternative way to enter the shop directly from the water. The books are stored in gondolas and kayaks, canoes and bathtubs, a solution to protect them against the city’s rising tides. Tigre, one of five resident cats, sleeps lazily next to the till, occasionally peeking at the tourists entering the bookshop.

Luigi Frizzo, Lino’s father, founded Libreria Acqua Alta more than fifteen years ago. Its name translates as “high tide library,” a joke that turned out to be a bit too prescient when historic flooding hit Venice last November.

“It was a tragedy,” says Lino Frizzo. “The water entered the bookshop, knocked over the furniture, and filled the bathtubs full of volumes. All the books there were completely soaked.” After the flooding, he calculated between 100,000 and 120,000 euros worth of damage, and estimated that more than 10,000 books were destroyed. “We stopped counting at one point, it was too much,” he said.

Venice is a city built on water and high tides are a usual phenomenon. Tides in Venice depend on two things — astronomical factors connected to the movement of the moon and the sun, and meteorological factors influenced by atmospheric conditions, particularly the wind. High tide levels usually peak during the months of October through December — 70 percent of high tide events occur during this period — but on November 12 last year, Venice was hit by an unexpected and exceptionally high tide, second only to a 192 centimeter high tide recorded in November 1966.

“The tidal prediction threshold [that day] was 140 centimeters, so we lifted everything — books, postcards, photographs, print reproductions — to above 160 centimeters, just in case,” recalled Lino Frizzo. “But the tide was 47 centimeters higher than expected, it was a disaster,” he added, indicating with his hand how far the water had risen.

“I couldn’t save my books, the water rose too fast,” he said, “Our name is Acqua Alta, we are ready for water, but this time it was different.”

There are different thresholds that indicate tide levels, which consequently trigger an alarm system coordinated by the Centro Previsioni e Segnalazioni Maree, the service designed to monitor the tides in Venice, which alerts citizens via sirens, SMS messages, and social media in cases of high water.

On the evening of November 12, the tide reached 187 centimeters. “You won’t believe it without seeing it, the water rises really quickly. In addition, the strong wind boosted the tide,” Lino Frizzo said. “The water entered the bookshop when nobody was here, it was ten in the evening. Otherwise the damage might have been less.”

Over the centuries Venice has been built on 118 small islands in an area of inland sea water covering more than 50,000 square kilometers. This creates the Venetian lagoon. The city of Venice has tried to find solutions to stop rising seawater entering the lagoon and flooding the city. One of the solutions they came up with is MOSE, an engineering project aimed at safeguarding the city by installing gates on the bottom of the lagoon. The gates lift during a high tide event, creating a temporary barrier between the sea and Venice.

“We hope that sooner or later MOSE will be operational,” says Lino Frizzo. The project, which will cost an estimated 5.5 billion euros, was initially due for completion in 2016. It’s now expected to be completed in December 2021 at the earliest due to logistical issues, though a test was successfully completed during a high tide earlier this month.

However, there are concerns that even when MOSE does become fully operational, it will not be able to cope with quickly escalating challenges posed by climate change.

“MOSE won’t solve the problem because it has been designed without considering the significant sea level rise [expected] over the next decades,” climatologist Luca Mercalli said in an interview with the talk-show Che Tempo Che Fa a few days after the November 2019 flooding. “If MOSE is activated, it will be useful just for a few years.”

That’s because as sea levels rise — according to the Intergovernmental Panel on Climate the global mean sea level will rise between 0.43 meters and 0.84 meters by 2100 relative to 1986 to 2005 — the land Venice is built on is subsiding, causing the city to sink.

As a result, research suggests that the flooding last November, the highest in 53 years, could be the new normal. “High tides are normal, but this high it is not,” says Lino Frizzo.

In the midst of tragedy, however, Libreria Acqua Alta staff were surprised by the overwhelming public response to their predicament.

“After the flooding, hundreds of people came here to help us to remove the soaked books,” says Lino Frizzo. A human chain took shape in the calle — a Venetian alleyway — and along the canal, where volunteers helped to pack the thousands of destroyed books into bags and onto boats.

In the months following the flooding, donated books began to arrive from all over Italy — from Rome, to Milan, to Veneto, and more.

Volunteers continued to help out even after the store was cleaned up. One of them, design student Maria Vittoria Miccoli, decided to do something to help Acqua Alta by transforming the ruined books into pieces of art.

“When I saw what happened to the books in Venice I thought to give them a second life,” says Vittoria. Acqua Alta gave Vittoria, and her colleagues Anna Carera and Ambre Carladous, 500 damaged books, and with the help of some volunteers on boats, she brought them to Milan. “We left the books out to dry for a night, but some of them were too damaged. We literally picked them out of the water, they were full of mold.”

She asked friends, colleagues, and lecturers to help her create artworks from the books. “Literally everyone participated, not just artists or designers,” says Vittoria. “Someone created a set of lamps, people illustrated the pages, someone else made paintings.” 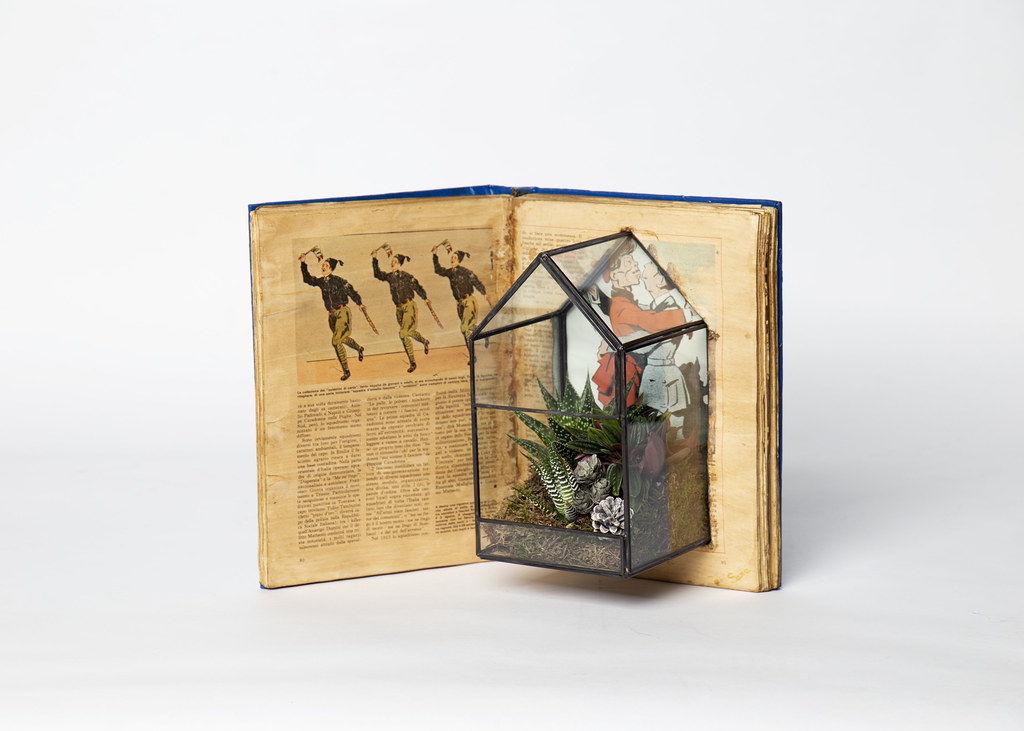 Coltiva la cultura, by Sara Borsi, an IED University student, was created from the damaged books and auctioned to raise funds for organizations like the Querini Stampalia Foundation, which suffered extensive damage to its book collection during the high tide. Photo by Giovanni Lavarini. 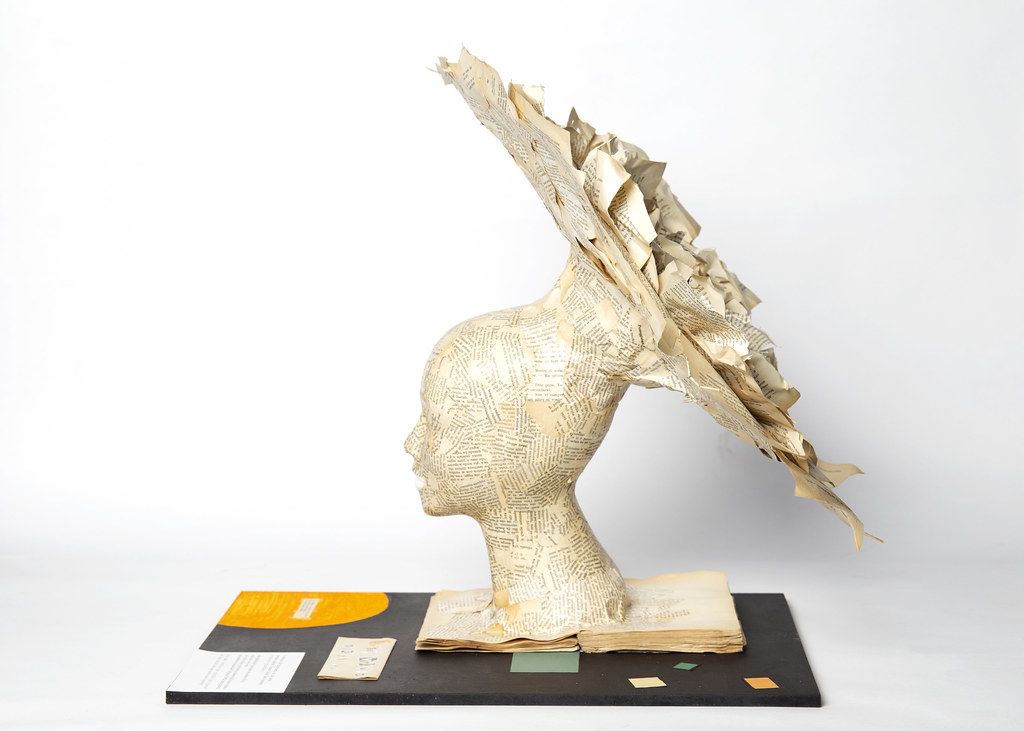 Avrei voluto dirti…, by Francesco Leuce e Vittorio Albano, an IED University student. Some 100 people created artwork out of the books damaged in the flood. Photo by Giovanni Lavarini.

One hundred people between Milan and Bologna used their imaginations to create individual works of art for the project, which received support from IED University. The books merged into Maria Vittoria’s charity project Libri Controcorrente, with an auction of the books-turned-artworks aimed at raising money to preserve Venice’s book collections. The remaining artwork was displayed in an exhibition at Libreria Bocca, in Galleria Vittorio Emanuele.

“Our wallet was empty, but our hearts were full,” said Lino Frizzo. Without the volunteers, it would have been a complete disaster.”

Nearly a year passed since that exceptionally high tide, and Venice is entering the high tide season once again. A lot has happened since last November, not least of all the global Covid-19 pandemic, another setback for the bookstore, which relies in large part on tourist traffic. While last November visitors would have discovered books walking shoulder-to-shoulder in the small bookshop, eager tourists now wait outside for their turn to enter as Lino Frizzo limits store capacity.

Still, Libreria Acqua Alta’s doors are open. Lino Frizzo has reorganized the Italian literature in the ‘rescue boat’ in the back room. Cappuccino, the youngest of the book shop’s cats, sleeps in the gondola and gently swishes his tail over a photo album, whose cover portrays an old map of Venice’s canals.

Lucrezia Lozza is a freelance journalist and documentary maker. She works for the Italian newsletter Good Morning Italia and is the cofounder of the production company Dogma Films. She holds a Master’s degree in journalism and one in modern philology.