A Deadly Pig Disease is Spreading Around the World

Swine fever has made its way into China, home to half the world’s pigs. Farmers in Estonia are already counting the cost

Ott Saareväli, the owner of a pig farm in Lääne county in Estonia, is starting all over again. In September last year, government vets diagnosed an outbreak of African swine fever (ASF) in a section of the farm where pregnant sows are held ahead of farrowing. It made no difference that the outbreak had been limited to one area – all seven thousand of his pigs would have to be slaughtered immediately. 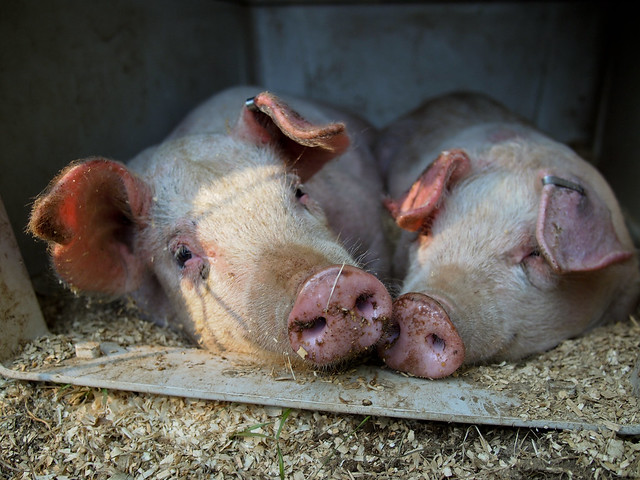 photo by Adam Chandler The current outbreak in central and eastern Europe began in January 2014, when cases were first reported in Lithuania, swiftly followed by outbreaks in Poland in February, and in Latvia and Estonia in June and September that year. This time the spread has been far more rapid despite considerable biosecurity efforts.

“We have the strictest biosecurity measures here, and still no one is quite sure how the disease got in – it may have been a truck that wasn’t washed properly after visiting an infected farm,” says Saareväli. “But if you find just one pig, then everything has to go.”

In the wake of the diagnosis, the outhouse used for storing dead pigs was piled high with more than 200 carcasses from the affected section, some of which had been rotting for more than a week. Many of the carcasses had burst open, spilling out dozens of dead piglets. They would all have to be removed by hand, which even some of Saareväli’s most experienced farmhands could not bring themselves to do. The thousands of remaining, healthy pigs would be loaded into special lorries where they would be gassed. The killing process took a little over a week.

“It was emotionally very difficult for everyone,” says Saareväli. “The worst thing was the silence after the last pig was gassed. Pig farms are noisy places, but here it was completely silent.”

This is not the first time Europe has been struck by ASF. In 1957, it was introduced into Portugal, reportedly after infected airline food was fed as swill to pigs near Lisbon airport. The disease spread to Spain and France and took until the 1990s to eradicate through concerted surveillance and culling. In southern Spain, where ticks acted as an additional reservoir, old-fashioned farm buildings were destroyed and replaced with modern facilities to keep ticks out. “There was a major effort to eradicate it,” says Linda Dixon, a cell biologist who works on ASF at the UK’s Pirbright Institute.

This time the spread has been far more rapid despite considerable biosecurity efforts. The current outbreak in central and eastern Europe began in January 2014, when cases were first reported in Lithuania, swiftly followed by outbreaks in Poland in February, and in Latvia and Estonia in June and September that year.

Cases were also confirmed in the east of the Czech Republic in June 2017, and in Romania and Hungary earlier this year. More outbreaks have also been reported in Russia, Ukraine and Moldova. In recent weeks outbreaks have been reported in China, home of more than half the world’s pigs, which produces twice as much pork as the EU, and five times more than the United States.

In Germany, farmers have called for a cull of 70% of the wild boar population, which is thought to be hundreds of thousands strong. “High populations of wild boar made the controls more difficult and once you have so many boar it’s difficult to reduce the number because they just keep reproducing,” says Dixon. “They’re very successful animals with a range right across Asia and Europe. They can swim as well.”

In Denmark, a fence is planned along the border with Germany to prevent the migration of wild boars. “If African swine fever were to occur in Denmark the third country export markets would close immediately, and the inter-community trade within the EU would be affected,” says Sisse Berg Wulff, a vet at the Danish Veterinary and Food Administration.

She adds that it is only a matter of time until the disease reaches Denmark, a major pork exporter. Denmark’s National Veterinary Institute has estimated that an outbreak could cost the country up to 10bn Danish crowns (£1.2bn).

Dixon says a crucial opportunity to limit the spread of the virus was missed when it took Georgian officials about three months to diagnose the disease after it was introduced to the country from east Africa in 2007. By the time a diagnosis was made, it had probably already crossed international borders. For a number of years the spread was slow, and at times the disease appeared to be under control.

But in recent years the dispersal has accelerated. Dr Matthew Stone, deputy director general of science at the World Organization for Animal Health (OIE), which coordinates international monitoring of diseases, says: “At the moment because it’s on the move and undergoing a period of pandemic spread it’s very important.

“The key thing that makes us very conscious of the threat that ASF poses is that China represents half the pigs in the world,” says Stone. “It’s extremely important for food security and the economy of China and in the absence of a vaccine, stamping-out policies are crucial.”

ASF presents no risk to humans, but for pigs it is often fatal. With no effective treatment or vaccine, farmers can only guard against outbreaks using tight biosecurity measures and by adding anti-virus drugs into feed. Once it has been diagnosed, entire herds are preventatively culled. In both 2016 and 2017 more than 300,000 pigs were culled in attempts to control the spread of the disease.

Transmission occurs only through direct contact with infected animals (alive or dead) or meat – the virus is not airborne. However, it is hardy. It can survive for up to 1,000 days in frozen meat and can persist for long periods in boar carcasses, on clothing, boots and soil.

In southern Europe, ticks provide an additional reservoir of virus. The disease travels via boar, or via sausages – at least one outbreak was traced to a roadside picnic with sausage meat left behind.

ASF can be so devastating to pig farming that in the 1970s claims arose that the CIA had colluded in its introduction to Cuba to try to destabilize the Castro regime. The disease, which has been endemic in many sub-Saharan African countries for decades, spread to the Caucasus, Russia and parts of Belarus and Ukraine in 2007. It has also been present in Sardinia since 1978, where it has proved resistant to all attempts to eliminate it, due to the high concentration of wild boar and traditional farming practices involving unregistered, free-ranging pigs.

If the virus spreads incrementally at its current rate, it would still be years away from British farms. But Zoe Davies, chief executive of the UK’s National Pig Association, along with others, is concerned that it could make a sudden jump – a high proportion of UK farmworkers are from eastern Europe. “That’s why everybody is very jumpy,” says Davies. “There’s a lot of messaging around don’t bring your delicacies back home. If anything got in, we’d kiss goodbye to our export market.”

Farmers in Estonia are still counting the cost. While many larger commercial farms managed to keep the disease out, smaller holdings have been devastated: of the 920 pig holdings that existed in Estonia in 2014, only about 125 remain.

Although no new cases have been reported in domestic pigs in Estonia this year, officials stress that the country’s small size makes it considerably easier to devise, implement and communicate a comprehensive biosecurity regime than is the case in much larger countries such as Poland or Germany. Like Saareväli, they live in the knowledge that even the most trivial act of carelessness could unleash the disease again.

“We are very much worried about our neighbors,” says Maarja Kristian, an official at the Estonian Veterinary and Food Board. “For example, we have this small border with Russia, and if we don’t know what is going on there, what kind of situation is there, we can’t predict what will happen.

“Wild boar breed very quickly – I am afraid the risk of this disease will be with us for ever.”