In the late 1940s, Isle Royale’s moose population, which swam to the island decades earlier, welcomed some new visitors: a group of gray wolves. The wolves had walked to the Michigan island from Canada, crossing Lake Superior in the winter when the water was frozen and establishing Isle Royale as their new home. The wolf population grew over the next several years, preying on moose and mating both internally and with new wolves who crossed the ice bridge during the winter.

Now the wolf population is in trouble, and wildlife managers in Isle Royale National Park, a designated wilderness area, face a tough decision: Repopulate the island’s dwindling wolf population, or allow the species to go extinct on the isolated island?

Managers have a plentiful source of information about the wolves at their fingertips. In 1958, researchers launched a 10-year study to monitor the predation habits of wolves and the wolf-moose relationship on the island. The project, which includes an annual survey of the wolf population, was extended past the 10-year mark, and continues to this day as the longest running predator-prey system study in the world.

At its high point in the early 1980s, the Isle Royale wolf population numbered above 50 wolves, then leveled out at about 22 wolves. But in 2008, wolf numbers began to irreparably decline, and this year, the population dropped to an all-time low of only three wolves due primarily to complications from inbreeding and weather changes.

Rising global temperatures have prevented ice bridges from forming between Isle Royale and Canada — they’ve only formed twice in the past 16 years — so the wolves are stuck on the island to inbreed and the population is becoming unhealthier by the year. Wolves can’t walk over the ice to find healthy mates to breed with, and healthy wolves can’t come to the island.

Wolves are the top predator on the island, and historically, they have helped control moose numbers, saving the remote Isle Royale environment from ruin. With the wolf population down, there’s little to stop the moose from wildly overpopulating the island — which is exactly what’s happening. The number of moose on the island more than doubled between 2010 and 2014, rising from 500 to 1,200. A single moose will eat about 40 pounds of flora a day, and given the increasing moose population, losing that much vegetation per moose each day will devastate the Isle Royale ecosystem. 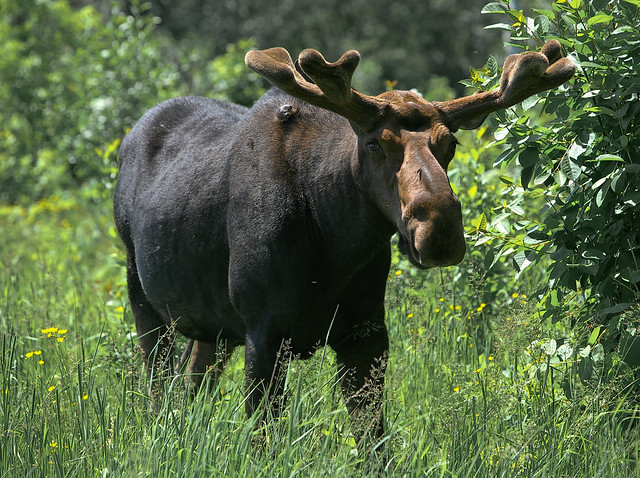 “One of the most basic lessons we know in ecology, wherever creatures like moose live, you have to have a top predator,” John Vucetich, an ecologist from Michigan Tech and part of the study’s survey team, told the Detroit Free Press. “If you don’t, the herbivore can cause a great deal of harm to the vegetation.”

And that’s what has led to the current situation — a huge population of moose poised to destroy the national park.

Researchers involved in the longterm Isle Royale study have proposed four options to address this problem: introduce new wolves now to breed with the inbred ones and increase the island population; let the less healthy wolves on the island die off and then introduce new, healthy wolves; reduce the moose population without introducing new wolves; or don’t do anything and let nature take its course, since the animals weren’t native to the island to begin with.

Opinions are split on what to do.

Vucetich believes that new wolves should be introduced immediately, bolstering the island population and allowing for breeding patterns to resume. His colleague from Michigan Tech, Rolf Peterson, agrees. Peterson has been studying the wolves on Isle Royale for more than 40 years as part of the annual survey and believes that without introduction of new predators, the isolated wilderness area will be permanently damaged. Geneticist Philip Hedrick, who has been analyzing the wolf population’s genetics on Isle Royale, also advocates for introducing new wolves right away, hoping the population influx will give the wolves there a fresh start.

“This was a park where the idea of letting nature do everything actually worked,” Peterson told the Detroit Free Press. “It wasn’t because of keeping hands off; it was because there were top carnivores.”

George Desort, a researcher and filmmaker who produced a documentary about the wolf and moose study called Fortunate Wilderness, thinks introducing new wolves to the island is essential.

“There are very few intact ecosystems in the lower 48, and Isle Royale was one of them,” he told Earth Island Journal. “I look at the island as a working puzzle when all the pieces are there, predator and prey. Without wolves on the landscape, Isle Royale is incomplete; it is not a working ecosystem.”

But the National Park Service, which announced the initiation of a Moose-Wolf-Vegetation Management Plan for Isle Royale last year, wants to weigh each option carefully, and is trying to decide between its own mission of conserving wildlife and that of the Wilderness Act, which says mankind shouldn’t make a noticeable impact on wild areas. Wilderness Watch, a group dedicated to enforcing the Wilderness Act policies, believes introducing new wolves would be in direct violation of the act.

Phyllis Green, park superintendent for Isle Royale, seems to have the same opinion. A few wolves were introduced to the island some decades ago, and the experiment had little long-term success as evidenced by the now dwindling population. Green wants to thoroughly examine what will be best for the island and its food chain before making a final decision.

Whatever the NPS chooses to do, the situation is a ticking bomb. By the time a decision is reached, the wolves on the island could already be locally extinct, and the moose could have over-grazed island vegetation, which could impact future generations of wolves and moose alike.

“I have spent countless nights on the island and have only seen and heard the wolves a handful of times, but their presence is palpable,” Desort said. “An Isle Royale absent of wolves would leave an immeasurable void felt by all visitors. There is not an Isle Royale visitor who has ever forgotten a wolf track, a wolf howl, or a wolf sighting during their adventures there.”