In 2008, Debra White Plume, an Oglala Lakota environmental justice activist, received a piece of mail with no return address. Inside was a 1989 letter to the Nuclear Regulatory Commission from John Peterson, an exploration geologist who had worked on what is now the Crow Butte uranium mine in northwestern Nebraska. In the letter, Peterson describes how uranium mining in the area would almost certainly contaminate the regional water supply if it went forward. “I believe certain aspects of the geology of the Crow Butte uranium deposits have been deliberately overlooked or suppressed so that mining could proceed and profits be gained regardless of the effect upon local ground water quality,” he wrote.

Photo Wikimedia Commons Badlands in the northern portion of Pine Ridge Indian Reservation. The Lakota-led opposition
has been engaged in a six-year-long battle to prevent any expansion of the mine, which is 30
miles upstream on the White River that flows through the reservation.

Peterson’s warnings were disregarded, mining at the site began two years later, in 1991, and it continues to this day. Now, the mine is on the verge of expanding. Cameco Corporation, a Canadian mining company, is seeking permits to create two new mine sites north and west of its current location. If approved by federal regulators, Cameco’s operations would swallow up an additional 8,300 acres of the prairie hills.

White Plume and other residents of the Pine Ridge Reservation are determined to stop that from happening. The Lakota-led opposition has been engaged in a six-year-long battle to prevent any expansion of the mine, which is 30 miles upstream on the White River that flows through the reservation.

“For us it’s truly a matter of life and death,” White Plume said.

In the mid-2000s, it became clear that reservation residents were experiencing an unusually high rate of renal failure, rare cancers, diabetes, and other health problems, says White Plume, founder of Bring Back the Way, an organization aiming to revitalize the Lakota way of life.

In the past decade, water tests on the reservation have revealed unsafe levels of arsenic, radium, barium, thorium, and radionuclides, all of which can be released during the uranium mining process. Studies are ongoing on the Pine Ridge Reservation, one of the most impoverished areas in the United States, but it is likely to prove difficult to identify the source of heightened levels of uranium and other toxic metals in nearby water. 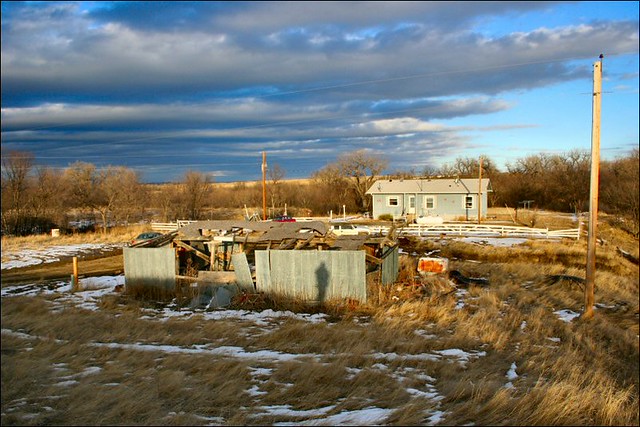 Photo by Raymond S BuckoThe Pine Ridge Reservation is one of the most impoverished areas in the United States.

At the Crow Butte mine, Cameco, one of the world’s largest uranium producers, uses an in-situ recovery method, which injects chemically charged water into a rock layer to free up the uranium. The company maintains that all contaminants are confined in the aquifer above the uranium deposits. A Cameco spokesperson said the mine “has never been cited for polluting a well outside the mine site in any way, and contamination from operations has never been detected in surface waters downstream.”

That may be, but Crow Butte has a history of contaminated solutions escaping the mining area in what the industry calls “excursions.” From 1997 through 2013, Crow Butte had at least 30 excursions, according to NRC documents. In 2008, a Nebraska District Court found that, among other violations, Cameco constructed wells in an area that had the potential to contaminate drinking water. The company was fined $50,000 — or about as much as Cameco made every 37 minutes in 2012.

LaGarry has told the NRC that in the past few decades it has become apparent that the earth’s crust — at one time believed to act like bendable layers of clay — is actually broken and fractured, creating pathways where polluted water can escape to other water sources. Cameco has been reluctant to embrace such findings, however, and the company was chastised by NRC judges for cherry picking decades-old science to justify its case to expand its mining. Cameco would not comment on the 1989 John Peterson letter.

The NRC’s decisions over a renewal permit for Cameco’s current mine and its planned expansion could prove a harbinger for the uranium industry. Uranium production in the US is at its highest level since 1997, driven in part by the expiration of the “Megatons to Megawatts” program in which the US recycled the radioactive material in old Soviet warheads. There are currently six active uranium mines in the US, as well as one processing facility in Utah. According to the most recent US Energy Information Administration and NRC information, there are 23 sites in the US where companies are preparing to begin mining or expand current uranium mines. And global uranium demand is likely to increase. In addition to the 434 nuclear reactors currently operable, a total of 245 reactors worldwide, according to the World Nuclear Association, are either under construction or are planned to be built soon – more than prior to the 2011 Fukushima disaster.

Meanwhile, White Plume and others continue their fight. “You have to decide how long you’re going to prioritize your own life over the life of coming generations,” she said. “They’re not going to have a life if we don’t protect the water.”