For thousands of years, wild salmon has been central to the livelihood and traditional culture of First Nations communities along the British Columbia coastline. They have eaten fish from the same waters for generations; young people they have learned and danced the same Salmon Dance as their elders. Wild salmon are also key to a healthy and stunning ecosystem that includes orcas, grizzly bears, and bald eagles, and that draws millions of tourists to the region every year providing billions of dollars in local revenue. 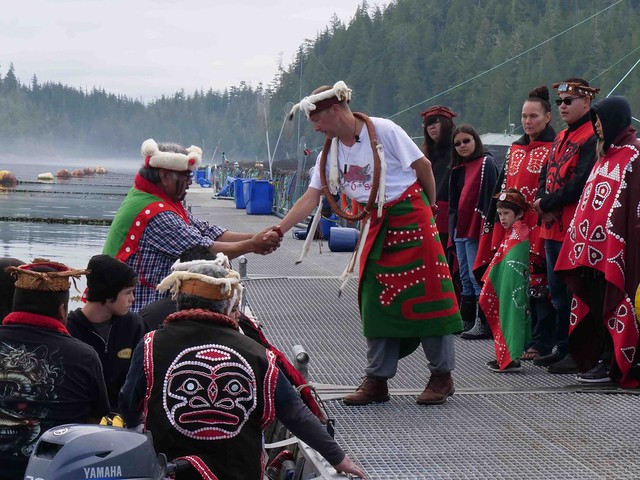 But according to activists from British Columbia First Nations, a robust aquaculture industry is putting this all at risk. In particular, activists believe open-pen fish farming — raising fish enclosed in nets that are submerged and open to surrounding waters — has exposed wild fish to sea lice and disease such as the piscine reovirus that puts wild salmon stocks at risk. In addition, there is the potential for farmed fish to escape, which also threatens wild Pacific populations with contamination.

Although there has been fish farming in the region for 30 years, the First Nations did not consent to these farms in their traditional territory. And they are committed to putting an end to the practice.

Since last August, protesters have occupied facilities associated with two open-pen fish farming sites, both of which are up for relicensing in June. The facilities, operated by Norwegian company Marine Harvest, are located on Swanson Island and Midsummer Island in the Broughton Archipelago in northern British Columbia, an important wild salmon migratory route. Occupiers are sending a clear message to government they want their rights as Indigenous people upheld and the licenses cancelled.

On Midsummer Island, protesters erected wooden structures directly on top of the walkways that run between the fish pens, with assistance provided by the Tiny House Warriors team gearing up to battle the Kinder Morgan pipeline in the coming months. On Swanson, abandoned Marine Harvest cabins were occupied in an area overlooking but not directly interfering with farming operations.

Shortly after the occupation got underway, Marine Harvest went to court and won an injunction — those occupying the Midsummer fish farm were given 81 days to get off Marine Harvest property, prompting a relocation to nearby Cedar Island. The fight continues on Cedar and on Swanson, and could soon be expanded.

Both the national and provincial government oversee fish farming approvals in Canada, but only the provincial licenses are up for renewal this year.

“We want the premier to cancel these licenses immediately, but it looks like they are going to wait this one out and see how long they can push it off,” says Hereditary Chief Ernest Alfred from the Nagmis, Lawit’sis and Mamalilikala nations, who, along with other protesters, has been occupying cabins on Swanson Island for more than 145 days. “We are a tough people and have lived here for thousands of years and know how to run around on the water. If they think they are going to tire us out, they’ve got to be kidding.”

The occupations have enabled Indigenous activists to monitor farming operations and learn more about what is going on at the facilities, including by plunging GoPro cameras underwater into the pens to observe the deplorable condition of the farmed salmon.

They have also been successful in drawing attention to the issue. In October, British Columbia Premier John Horgan paid a visit to the nearby town of Alert Bay and met with 40 chiefs to discuss the issue.

“We’ve been battling this for 30 years, but that’s the first time someone has come and spoken to our chiefs,” says Molina Dawson, a 21-year-old Musgamakw activist from Kingcome Inlet, who is currently on Cedar Island. “If nothing else, he’s paying attention.”

Following his October visit, Horgan released a statement: “Any strategy for aquaculture must put a priority on the protection of wild salmon, collaborate with First Nations and acknowledge their interests, involve the federal government and recognize that the industry now generates nearly $800 million in annual value, while supporting several thousand jobs in rural and coastal areas.”

Indeed, fish farming is big business. Roughly 50 percent of all fish consumed globally is farmed. In British Columbia, aquaculture adds hundreds of millions of dollars to the provincial economy and produces thousands of jobs. But, Alfred thinks that contribution pales when compared to what he calls the wild salmon economy that includes wild salmon fishing as well as the ecosystem that makes the province such a tourism draw.

“If we lose our wild salmon we lose our whales, we lose our grizzly bears, there goes that tourism industry,” he says. “People don’t come here to eat in sushi restaurants. They come because we have this environment and we have the Indigenous people along the coast. There is no long-term sustainability at all. You’d think 30 years and the billions of dollars they’ve siphoned out of our waters would be enough, but it’s not.”

According to University of Victoria professor John Volpe, there is no scientific argument in favor of open-pen farming of Atlantic salmon in British Columbia.

“It all comes down to the fact that we are trying to produce an inherently ecologically expensive product, Atlantic salmon, as cheaply as possible and the cost of the differential is offloaded to the environment,” he explains. “The science argument [against fish farms] is overwhelming and the only voices to the contrary are those that have a financial stake in presenting an alternative view. The dispassionate, independent scientific community speaks with a single voice.”

Volpe traces the history of fish farms back to Norway where the operations wreaked havoc on wild salmon stocks. As Volpe explains, fish farms are typically located in calm waters such as bays and fjords, areas which are also the mouths of salmon-bearing rivers. The farming operations, which involve keeping tens of thousands of fish in small pens, produce parasites such as sea lice. Young salmon are smaller than a triple-A battery and have no scales and are defenseless against such parasites.

Ultimately, the impact of the farmed fish on wild populations in Norway was so severe that the government decided to willfully apply a broad spectrum poison to 27 salmon rivers in the country just to get rid of the parasites carried by the farmed fish. They wiped out entire river ecosystems in an attempt to restore wild salmon stocks.

Volpe says the same thing could happen in British Columbia. “They are exposing the next generation of [wild] salmon to tremendous potential impact,” Volpe says of the BC operations.

The industry’s history should have been a red-flag for the BC government, but this was not the case, Volpe says. Thirty years ago, when Norwegian companies were looking to begin operations in British Columbia, Volpe was working as a biologist for the BC provincial government. “I can say with absolute confidence that the amount of review and inspection that went into deciding to let them into British Columbia was absolutely nothing,” he says. “Not a single bit of effort or retrospect, everyone had dollar signs in their eyes and here we are.”

Currently, BC has more than 100 aquaculture operations along the coast, and ranks fourth in the world in aquaculture production behind Norway, Chile, and Scotland.

“It all comes down to dollars,” he says. “Everywhere they go, they destroy.”

On Swanson and on Cedar, Alfred and his group have not stopped Marine Harvest from operating the facilities. But if the company attempts to bring in a fresh load of Atlantic salmon, they are prepared to act.

“It would be highly inadvisable of them,” said Alfred. “My hereditary chiefs of Nagmis have said that there would be a war on the water if they did something stupid like that. The unrest will be unprecedented up here. There are serious ramifications for not listening to our people.”

Outside of the Broughton Archipelago, other Indigenous activists have taken up the cause again open-pen fish farms, staging protest actions in solidarity with the occupations. On Jan. 18, Tsastilqualus Ambers Umbas and Shawna Green were arrested after chaining and locking the front doors of the Department of Fisheries office in the British Columbia capital of Victoria.

“We felt it had to be done in solidarity,” says Green, who was arrested a short time after the protest began. “I didn’t even know what was going on until that morning, but we just felt like we had to. The ancestors were with us that day. Nobody is listening to us, so if we have to lock doors to get our voices heard, we will.”

Green was also part of the occupation at the Midsummer facility when it first began last fall.

“Trudeau, Horgan, they are both saying they want to reconcile with First Nations people, and they want to work nation to nation, well this isn’t how you do it,” Alfred says. “You don’t shove an industry down people’s throats. There is only a handful of people that actually benefit from this cancer along our coast.”

The Swanson and Midsummer occupations coincided with a farmed fish fiasco in Washington State: on August 24 last year, as many as 260,000 farmed Atlantic salmon escaped when a pen near Cypress Island holding 300,000 fish collapsed. A report released last week by Washington state agencies concludes that the company operating the facility, Cooke Aquaculture, initially underrepresented the scale of the event and misled regulators about its cause.

Kevin Ranker, a Democrat state senator for Orcas Island, introduced legislation earlier this year to ban fish farms from the Salish Sea — the coastal waterways of northwestern Washington state and southwestern British Columbia. At the hearing of the Senate Agriculture, Water, Natural Resources & Parks Committee on his proposal to permanently ban commercial pens, Ranker said: “The crisis we face due to the escape of hundreds of thousands of invasive Atlantic salmon from the Cooke Aquaculture net pen failure last summer is alarming. However, we must realize that in addition to the potential for these disasters, the day-to-day impact of invasive aquaculture fish in our waters is even more dramatic. Feces, disease, loose food pellets, or lice — this type of aquaculture could have serious impacts on our already threatened Salish Sea.”

In British Columbia, although there have been positive overtures regarding the protection of wild salmon and a willingness to talk about fish farming operations, so far it has been just that — talk. And Indigenous people have heard it all before from this government and previous governments. What the fish farm protesters want is action, and a ban on all commercial fish farming in their coastal waters.

“We are really fighting for our way of life, whether it’s Site C or Kinder Morgan or fish farms,” says Dawson. “We all rely on and are deeply connected to our land and our environment.”

The occupation is currently in a holding pattern as protesters wait for an indication of how Premier Horgan is leaning on the issue. But as the June license renewal date draws near, if no government action is taken, the protests could ramp up.

“There are a whole bunch of tribes in our areas from Port Hardy all the way to Campbell River and we go even further to our relatives up in Bella Bella, people would be coming from all over the coast to stand with us,” Alfred says. “We are not fooling around anymore. We have put up with this for 30 years.”