Agency walks back findings in earlier report, says that hydraulic fracturing can impact water 'under some circumstances'
By Lorraine Chow
Ecowatch

The U.S. Environmental Protection Agency (EPA) has released its widely anticipated final report on hydraulic fracturing, or fracking, confirming that the controversial drilling process indeed impacts drinking water “under some circumstances.” Notably, the report also removes the EPA’s misleading line that fracking has not led to “widespread, systemic impacts on drinking water resources.”

“The report, done at the request of Congress, provides scientific evidence that hydraulic fracturing activities can impact drinking water resources in the United States under some circumstances,” the agency stated in a media advisory. 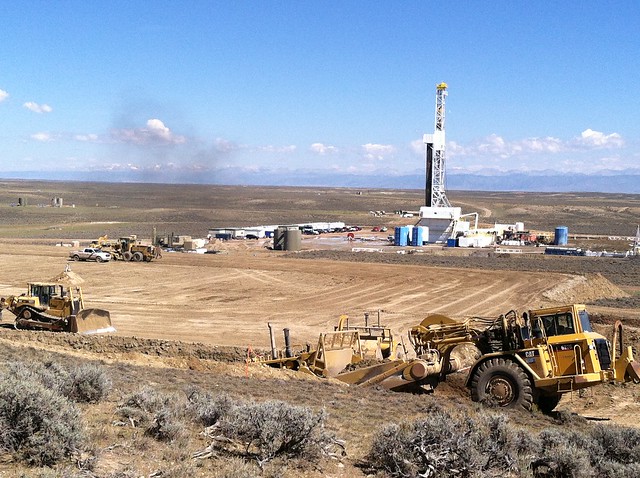 Photo by WildEarth GuardiansThe EPA’s final report on the impacts of hydaulic fraturing on water resources concluded that fracking can, in fact, impact drinking water in the US.

This conclusion is a major reversal from the EPA’s June 2015 pro-fracking draft report. That specific “widespread, systemic” line baffled many experts, scientists and landowners who — despite the egregious headlines — saw clear evidence of fracking-related contamination in water samples. Conversely, the EPA’s top line encouraged Big Oil and Gas to push for more drilling around the globe.

But as it turns out, a damning exposé from Marketplace and APM Reports revealed last month that top EPA officials made critical, last-minute alterations to the agency’s draft report and corresponding press materials to soft-pedal clear evidence of fracking’s ill effects on the environment and public health.

“There are instances when hyrdofracking has impacted drinking water resources. That’s an important conclusion, an important consideration for moving forward,” Burke told reporters today, according to The Hill.

Regarding the EPA’s contentious “national, systemic conclusion,” Burke said, “that’s a different question that this study does not have adequate evidence to really make a conclusive, quantified statement.”

In the new report, the authors heeded the EPA’s independent Science Advisory Board’s advice to review the “widespread systemic impacts” line from the June 2015 draft study. The final 1,200-page report omits that line.

“Scientists put that language in the draft report, and scientists made the decision not to include it in the final report based on feedback from the Science Advisory Board and their interpretation of the available science,” Burke explained.

As Pavillion rancher and affected landowner John Fenton testified last year, “When EPA launched its national study of fracking’s drinking water impacts, we thought they’d look first here in Pavillion where they’d already found pollution. But instead they ignored us without explanation. Science means taking the facts as they are. But EPA seems to be intent on finding the facts to support the conclusion they’ve already reached — ‘fracking is safe.’”

These specific cases studies are now mentioned in the final report.

In the new report, the EPA has identified cases of impacts on drinking water at each stage in the hydraulic fracturing water cycle:

“This assessment is the most complete compilation to date of national scientific data on the relationship of drinking water resources and hydraulic fracturing,” he added.

Unsurprisingly, the oil and gas industry has criticized the report.

“It is beyond absurd for the administration to reverse course on its way out the door,” American Petroleum Institute Upstream Director Erik Milito told The Hill. “The science and data clearly demonstrate that hydraulic fracturing does not lead to widespread, systemic impacts to drinking water resources. Unfortunately, consumers have witnessed five years and millions of dollars expended only to see conclusion based in science changed to a conclusion based in political ambiguity.”

The industry-funded group Energy In Depth added that despite changes in the central conclusion, the report still “blows apart the anti-fracking campaign’s most common claim, namely that hydraulic fracturing is polluting groundwater all across America.”

Meanwhile, public health and environmental groups and activists are saying the opposite.

“At last the EPA confirms what independent science has overwhelmingly determined for years, that drilling and fracking contaminate drinking water,” said actor and prominent environmentalist Mark Ruffalo on behalf of the national Americans Against Fracking coalition.

“Across the country, Americans have had their lives turned upside down as fracking has poisoned the water coming out of their faucets and has made their families sick. Now all of our federal and state elected officials need to take action to protect Americans by banning fracking. Water is life,” Ruffalo said.

Greenpeace researcher Jesse Coleman agreed. “The EPA’s final report on impacts of fracking on groundwater has concluded what too many Americans already know from personal experience: Fracking has caused lasting harm to drinking water sources throughout the country,” Coleman said. “The most important findings from this study is that drilling, fracking, and the use of hazardous chemicals necessary to frack have caused groundwater contamination. This puts to rest the widely repeated lie that fracking is ‘safe’ and has never caused drinking water contamination.”

Julia Walsh from Frack Action said, “The EPA has rightly reported that fracking causes water contamination. For all of the Americans living with this tragedy every day, they are finally validated by the federal government.”

“The EPA could have bowed to pressure from the oil and gas industry and didn’t, however, now that the EPA has acknowledged the serious inherent problems with fracking, it is incumbent upon the Obama Administration to stand with the thousands of Americans who have had their water poisoned, and protect them from this dangerous practice,” Braun continued.

“By listening to its scientists instead of its political advisors, EPA’s fracking study sets an example that we hope, but do not expect, the Trump Administration to follow,” Pagel said. “But a Scott Pruitt EPA would have to ignore five years of scientific study, and years of community impacts, to do otherwise. Unfortunately for the still suffering citizens of Pavillion, WY, Dimock, PA, and Weatherford, TX, their EPA investigations didn’t have advisory boards to publicly remind EPA that science trumps politics.”

And Wenonah Hauter, the executive director of Food & Water Watch, said that “the EPA has confirmed what we’ve known all along: fracking can and does contaminate drinking water. We are pleased that the agency has acted on the recommendations of its Science Advisory Board and chosen be frank about the inherent harms and hazards of fracking.”