9-Year-Old Calls on Kids to Speak Up for Parks

Robbie Bond is an eloquent, friendly, and passionate conservationist who founded a nonprofit in order to advocate for the preservation of national monuments and parks. He’s also 9 years old. Through his organization, Kids Speak for Parks, he and his parents cultivate national park and monument awareness, and promote education and advocacy by sharing their own travels to these landmarks and connecting nature-lovers of all ages online. They also have a school outreach program in the works.

Photo by Bureau of Land Management Motivated by President Trump’s executive order calling for a review of 27 national monuments, 9-year-old Robbie Bond is asking kids across the US to speak up in support of public lands. Grand Staircase-Escalante National Monument (pictured) is one of ten monuments that Interior Secretary Ryan Zinke proposed altering following the review.

Bond began this journey in response to President Trump’s April 2017 executive order calling for The Department of the Interior to review 27 national monuments designated since 1996 under the Antiquities Act. The five largest monuments under review were all marine Pacific monuments, totaling 218 million acres (read more about them here). The majority of the others were in the West and comprise about 11.25 million acres.

In August, Interior Secretary Ryan Zinke announced that while none of the monuments would be eliminated entirely, he would recommend significant alterations to several of them. The Washington Post then published a leaked version of Zinke’s report to Trump, which specifically recommended altering 10 monuments and reducing the size of Gold Butte, Bears Ears, Cascade-Siskiyou, and Grand Staircase-Escalante, which happens to be one of Bond’s favorites.

“Our government needs to hear from us, the youngest amongst us, that our national parks are not for sale,” Bond says in a promotional Kids Speak for Parks video. In a phone call, he explains he has long been an environmentalist, citing Hawaii’s Get the Drift and Bag it beach cleanup program as one of his earliest related experiences. “I also like just to go to the beach in my free time and just pick up trash,” he says. He mentions getting his pass for Every Kid in a Park — a program that gives fourth graders and their families free access to federal parks — as another important milestone. His dad, Robin Bond, adds that seeing The Lorax movie also had a powerful impact on his son’s commitment to the environment. The Bonds live in Huntington Beach, California and Robbie is now starting fifth grade through John’s Hopkins University online classes. 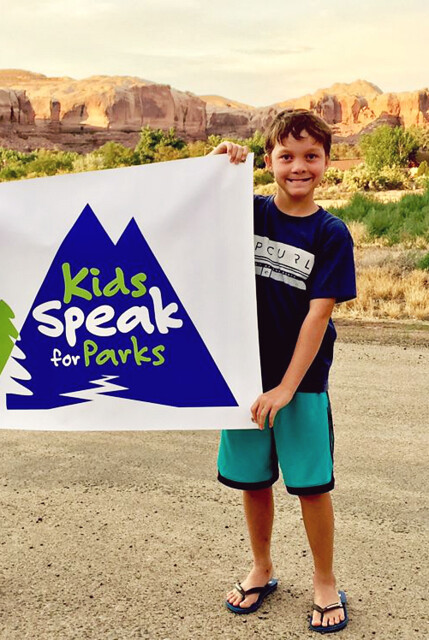 Photo courtesy of Robbie BondRobbie Bond sees kids as powerful advocates because they can put a new
spin on environmentalism and have a unique perspective to share.

This adventurous family is in the process of touring the monuments that were included in the review and Bond will be speaking at the SHIFT conservation conference in Wyoming in November. They recently visited Craters of the Moon National Monument in Idaho, another one of the younger Bond’s favorites. They document all of their trips on the Kids Speak for Parks Facebook page. Bond invites kids to follow them and to send in their own pictures and videos of national monuments. “And then, we’re going to post them on our website, so that other kids can learn about the national parks and monuments,” he says.

Kids Speak for Parks has been met with immense support from conservationists and nature experts. The outerwear and gear company Patagonia, which launched its first TV ad in support of the monuments in late August, has given the group a clothing sponsorship. Master Navigator and President of the Polynesian Voyaging Society Nainoa Thompson reached out for a meeting with Bond and has offered to help him visit Papahānaumokuākea Marine National Monument. Shortly after I spoke to Robbie, he interviewed Utah State House Representative Carol Moss.

“I get goose bumps just thinking about the people Robbie’s sat down with,” his dad shares, mentioning a recent visit with the Travel Representative of the Navajo nation, who sits on the Council of Seven that created Bear’s Ears National Monument. Both Robin Bond and his wife Michelle express gratitude for the growing support for their son’s work, which they describe as organic.

Michele Bond appreciates “the experience of visiting these natural treasures and knowing that [Robbie] feels comfortable to have a voice and wants to recruit other children and speak up to protect the land for future generations. I think I’m just really proud and honored to be part of this.”

Robbie Bond sees kids as powerful advocates because they can put a new spin on environmentalism. “What would you rather do, listen to something that they’ve already told you like 20 times? Or, listen to something brand-new?” he asks. He also believes youth have a unique perspective on life to share. “Kids see smaller things and adults only see the bigger picture.”

“We really do believe that every adult out there ... really needs to be reminded of what it was like to be a child back in the day,” his dad adds.

“Children are increasingly disconnected from nature, which is unfortunate for them and for society – because the benefits of nature to mental and physical health, to learning ability and to harmony in the community are well documented in scientific studies,” says Richard Louv, co-founder and chairman emeritus of the Children & Nature Network. He is well-known for coining the phrase “nature-deficit disorder,” defined on the network website as “the human costs of alienation from nature,” including “diminished use of the senses, attention difficulties, conditions of obesity, and higher rates of emotional and physical illnesses.”

Louv says the national parks and monuments can “definitely” play a role in preventing and reversing nature deficit disorder. He encourages adults to take a “proactive approach” to getting kids outside and advocates for the creation of more natural habitats in every community. “If we are going to have meaningful experiences with nature, we must ensure that children in every kind of neighborhood have everyday access to natural spaces, places, and experiences,” he says.

Kids Speak for the Parks is also working to get more kids outside, and has created a program called “The Kids Speak for Parks Education Fund.” As part of this program, the group will make education videos with VR technology and send them out to schools. “We’re going to have people who know a lot about the national parks or monuments in the videos,” Bond says. Then, teachers can project a live stream of a park and the expert can answer children’s questions in real time. The second goal of the school initiative is to take kids living in inner cities, who often have limited nature access, on field trips to the national parks and monuments.

Children who experience environmental education programs and spend time outside have been shown to demonstrate improved cognitive functioning, a reduction in attention deficit symptoms, and an increase in positive and generous social interactions. A study from the University of British Columbia recently found that children who are able to spend time in nature are more likely to become environmental stewards and advocates throughout their adult lives. Louv is inspired by “enthusiastic young people” like Bond and remains “hopeful that true cultural change is on the way.”

Though Zinke’s recommendations have not called for the elimination of any monuments, advocates like Bond are still concerned about the proposed revisions. Randi Spivak, public lands director at the Center for Biological Diversity, shared this sentiment: “Zinke’s sham review was rigged from the beginning to open up more public lands to fossil fuel, mining, and timber industries. He and Trump will not be allowed to rob Americans of their public lands. They’re asking for a court battle, and they’ll get one.”

The public has also spoken up in support of preserving monuments — in August, consulting agency Key-Log Economics analyzed the publicly available comments (1.3 million of the 2.8 million submitted) and found 99.2 percent of the participants oppose the weakening or elimination of monument protections.

Zinke’s review isn’t the only threat to national monument protections. On October 11, the House Natural Resource Committee passed the National Monument Creation and Protection Act, which would limit monument designations, give the president explicit authority to reduce monuments, and change the federal-local consultation process surrounding their creation. The bill would represent the most significant change to national monument law in more than a century.

Robbie Bond and Kids Speak for Parks will continue to add the voices of America’s youth to the public lands conversation. He reminds his young peers, “Kids need to speak up. Make your voice heard. Educate, advocate, and protect the national monuments.”