7 Popular Foods That Might Disappear Because of Climate Change

Throughout history, different types of food have surged and dropped in popularity, and some foods that existed at one point just aren’t around anymore. But we’re not talking about foods that aren’t popular, quite the opposite in fact. Some of our favorite foods and drinks could be considered “endangered” because the places where they are grown are being severely impacted by climate change. If this isn’t proof that we need to do something about climate change, I don’t know what is. To start off, here are a few foods that are part of our every lives that might not be around for long. 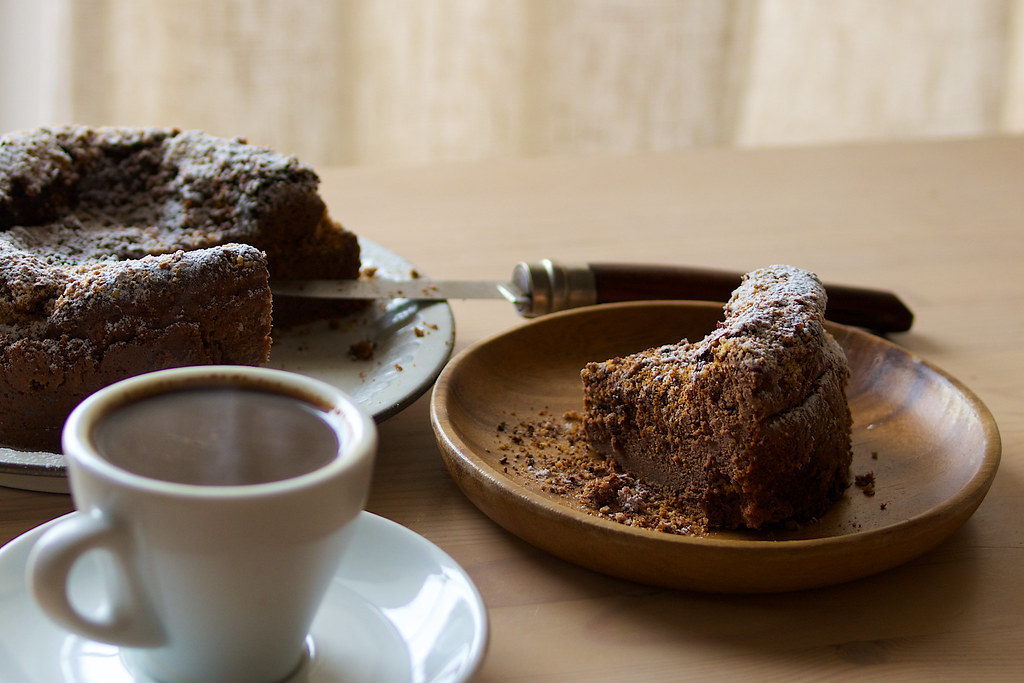 Photo by Taidoh/FlickrCoffee and chocolate are among globally popular foods that might soon become scarce because the places where coffee and cocoa beans are grown are being severely impacted by climate change.

According to the Union of Concerned Scientists, just about every coffee growing region in the world is being threatened by higher temperatures, longer droughts, and more intense rainfall and plant diseases. Coffee-producing countries are seeing their yields decline already. If temperatures continue to increase, 80 percent of the land in Brazil and Central America, where the most popular coffee bean, Arabica, is currently grown, will be unsuitable by the year 2050. During that same time period, a 50 percent decline in growing regions around the world can be expected.

Unlike coffee, rising temperatures alone isn’t necessarily putting this food on the endangered list. Cacao trees thrive in hot, humid environments, and can only be grown on land about 20 degrees north and south of the equator. The rainforest regions near the equator are perfect for the cacao trees. But the problem is that while the temperature is increasing, the amount of rainfall in these areas is not increasing, so the heat is sapping the moisture from the plants and the ground, decreasing humidity in these regions.

In 2015, 42 beer companies signed the Brewery Climate Declaration to call attention to how climate change is threatening the industry, while committing to lowering their own carbon footprints. Warmer temperatures and extreme weather in the Pacific Northwest are damaging hop plants, which means lower yields. At the same time, high demand for beer has pushed the price of hops up by more than 250 percent over the last decade. Clean water is also becoming an issue in the west with droughts and reduced snowpack.

Sugar maple trees are a particular species that require a specific growing environment to produce syrup, and take an average of 40 to 50 years to mature. But every year the syrup season gets shorter and shorter, because the days are too hot and the nights aren’t cold enough for the trees to produce syrup. Add acid rain changing the soil composition and insect infestations, and we may see these trees start migrating north. Either way, the maple syrup collection period in the U.S. will likely continue shrinking over the next century.

Climate change is affecting all kinds of seafood, from Atlantic lobsters to Pacific salmon. Lobsters, for example, are cold-blooded. As the temperature of the ocean rises, lobsters have to use more energy just to exist, having less energy for feeding, growth, and reproduction. At a certain temperature, it actually causes them physiological stress to have to work so hard for oxygen.

With salmon, higher water temperatures are pushing up the spawning cycle and increasing the mortality rate for the eggs and the fry. For the ones that do survive, the temperatures aren’t ideal for young salmon to grow.

Parents may need to find something else to go with the jelly in this kids’ lunchtime staple. Peanut plants are annuals, meaning they have one season each year to produce peanuts. The plants are also finicky, and do best with about five months of consistently warm weather and about 20 to 40 inches of rain. Peanuts are grown mostly in the Southern US, east of the Rocky Mountains, an area that had a particularly bad drought in 2011, when many plants died and didn’t produce any peanuts at all. As droughts and heat waves become more common, the price of peanut butter could continue to rise, and farmers will have to figure out ways to make their peanut plants hardier.

A staple of Peruvian culture for more than 8,000 years, the potato is now at risk. With close to 4,000 varieties, it is generally accepted that the potato originally came from Peru, which is home to the International Potato Center gene bank. But climate change is pushing potato plants higher and higher into the Andes Mountains, and at a certain point the plants will have nowhere left to go. 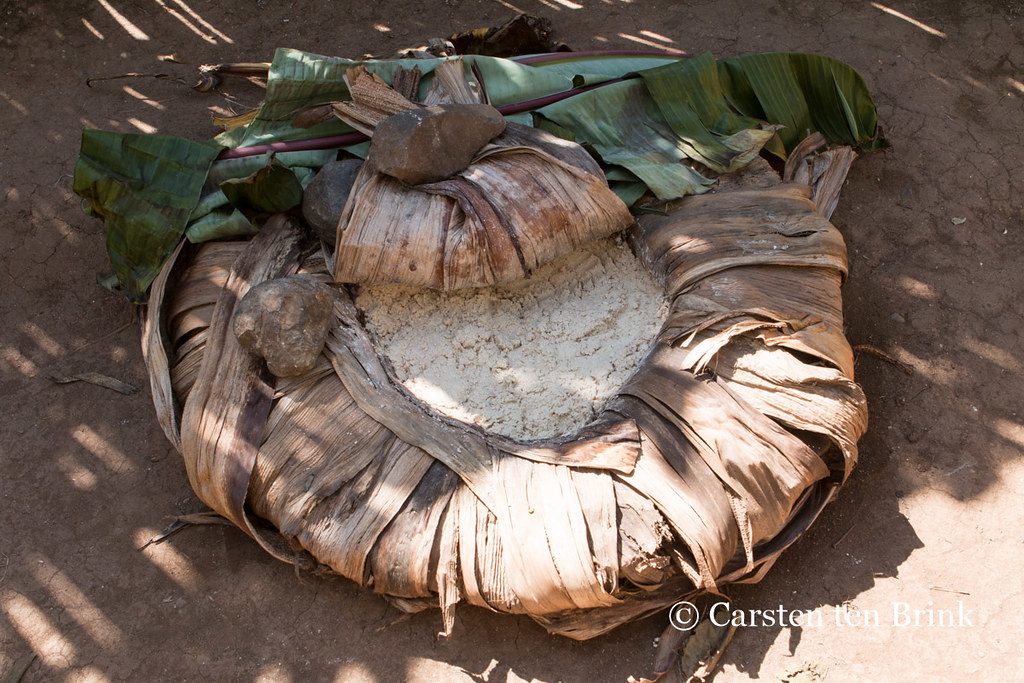 Photo by Carsten ten BrinkEnset dough. The Enset or false banana plant is among one of the lesser-known food crops that researchers are looking into. Cultivated in Ethiopia for more than 7,000 years, Enset can withstand heavy drought and heavy rain, making it a plant that can naturally withstand climate change. Ethiopians use it to make a flat, unleavened bread.

These aren’t the only foods at risk. There are plenty of other staples, like bananas and avocados, which we will be adding to this list if more measures aren’t taken to mitigate global warming.

What can we do about it?

Many regions affected by climate change are looking for ways to preserve the crops they have and to grow hardier plants that will survive. But perhaps a big part of the problem is that we depend so heavily on so few crops. A study from 2013 showed that just 50 crops provide almost 90 percent of our calories, proteins, and fats. As those crops start to fail, our food supply starts to falter as well. Some farmers and researchers have started looking into bringing back ancient or near-extinct crops that might be better suited for this new reality.

Amaranth is one example. Once considered a sacred grain by the Aztec, amaranth was banned by the Spanish because it was used in sacrificial ceremonies. The grain is higher in protein than any other plant, its leaves are edible as well, containing vitamin C, iron, and calcium. Amaranth is making a comeback in corn-heavy Mexico, mainly because it can withstand temperatures into the triple digits. Alone, amaranth doesn’t taste that great, but you can combine it with corn or other grains to mask the flavor. Researchers are also looking into amaranth as a possible crop in developing countries in Africa for both its ease of production and nutritional value.

Cultivated in Ethiopia for more than 7,000 years, the enset plant is known as the “false banana” because of its similarity to the banana tree. It can withstand heavy drought and heavy rain, making it a plant that can naturally withstand climate change. It’s nutritious, good for cows and livestock, and produces two times more food per unit of land than cereal crops. The tricky part about this plant is convincing people in the midlands, where there is no land scarcity, that it is worth cultivating.

While most plants making a comeback are known for being drought resistant and having a high tolerance for heat, other plants (like taro) can be grown in flooded areas, a concern for rising sea levels in Asia and other parts of the world.

Besides reviving ancient grains, seed banks around the world are playing a big role in conserving many of our plants. Saving seeds can help farmers find varieties of crops that grow better in different regions, and while there are about 15 major international seed banks, there are more than a thousand smaller banks and co-ops conserving their own seeds in communities across the globe.

Some believe that these seed banks are the best way to prepare for climate change. John Torgrimson, executive director of the Seed Savers Exchange in the United States, told Truthout that “while not every traditional variety tastes great or looks great, its genetics may be invaluable 50 or 100 years from now when the climate is different. There are qualities in varieties that we don’t even know about. It might be resistant to a particular disease; it may grow well in a particular region; it may have certain traits that will allow us to deal with climactic conditions going forward. Diversity is an insurance policy.”

An insurance policy that we will undoubtedly need to cash in someday.