The acute water shortage in Turkey’s major cities late last year caused a huge panic. It’s not hard to understand why. At one point, the capital city of Ankara had just a 110-day water supply left. Istanbul’s Mayor Ekrem Imamoglu said on TV, “We’re living in the aridest period of the last 91 years in Trakya,” referring to the portion of Turkey that lies in Europe.

In January, Istanbul’s reservoirs were filled to just around 19 percent capacity, half of what they were the previous year. Photo by Andrey / Flickr.

At the time, the country’s largest reservoirs were being drawn down at a significant rate. Istanbul’s reservoirs, which supply water to the city’s 17 million residents, had storage rates hovering around just 19 percent in early January, half of what they were the previous year.

The alarming situation improved with rain and snow at the end of January. Reservoirs serving the country’s major cities started to fill with precipitation day by day, and Istanbul emerged from its water shortage. The city’s dams are currently filled to 79 percent capacity. (Though other cities like Ankara are still struggling. Reservoirs there still at a low 21 percent.)

But this hasn’t relieved Imamoglu. In January , he reminded Istanbulites that “the city is still in danger of drought in the near future if they don’t take effective measures.” He added, “We shouldn’t rejoice because of the snowfall. We must keep being afraid [of water shortage].”

Turkey is currently considered a water stressed country. And though the recent drought has ended, water supplies are poised to become more stressed in the near future due to a combination of factors, including climate change, a growing population, and industrialization. As a result, the World Wildlife Fund, projects that over the course of the next decade, the amount of water available per capita will drop from 1,400 cubic meters to 1,100, bringing the country closer to a “water poor” designation.

“Turkey’s Mediterranean climate has been changing over the years,” said Orhan Sen, a professor of Meteorological Engineering at Istanbul Technical University. “Due to global warming, the temperature is rising in Turkey, the country’s climate is changing from the Mediterranean climate to semi-arid. This means that the drought in Turkey will continue.”

Mean temperatures in Turkey are expected to increase by 2 degrees Celsius over the next decade and precipitation is projected to decrease by 20 percent.

“The precipitation that ended the drought this year was just by chance,” Sen added. “Turkey has to take serious long-term measures to prevent a future drought.”

It seems the country is ready to do just that, as the national government prepares to release a water action plan this year, and as local and national agencies implement solutions both new and old.

One example is the use of Sarnıç (Cistern) systems. Cisterns were constructed to catch and store rainwater under buildings or cities in the Byzantium and Ottoman Empire eras. In the nineteenth century, the city abandoned this rain harvesting system in favor of modern techniques like pumping stations which supply water to the city.

Now the ancient system is making a comeback. Just this year, Istanbul Metropolitan Municipality (IBB) made cisterns compulsory. According to the new zoning regulation for the city, roof and ground waters will be collected in underground cisterns in all new buildings built on parcels of land over 1,000 square meters.

“Rainwater harvesting and recycling of greywater will make a great contribution to the efficient use of freshwater,” the IBB said via an emailed statement to Earth Island Journal.

Throughout Turkey, addressing agricultural water use could also play a major role in reducing water scarcity. “About 76 percent of the total freshwater supply of Turkey is used for agriculture, 13 percent for industry, and 11 percent is used as drinking water,” said Fırat Cukurcayır, president of the Meteorological Engineers Association in Turkey. “The use of freshwater for agriculture must be reduced.” 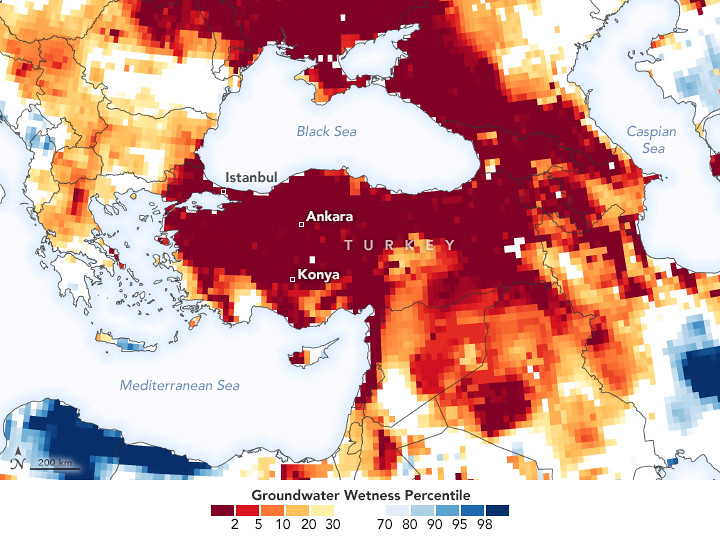 Early this year, much of Turkey was engulfed in a severe drought. While conditions have since improved, climate change is expected to increase the frequency of droughts there. Map courtesy of NASA Earth Observatory.

As part of a national plan to be released later this year, the Environment and Urbanization Ministry is expected to direct farmers in water-stressed regions towards certain crops, like lentils and chickpeas, that require less water than current crops like corn. That plan is also expected to tackle water leakage, which currently averages 38 percent across the country, and to build up to 150 underground dams to store water by 2023.

Addressing water pollution could also play a role in addressing shortages. “Many rivers in the country aren’t treated from industrial wastes” Cukurcayır said. “Discharge of industrial wastes into rivers without any treatment pollutes rivers. So the rivers cannot be used for other purposes such as fresh water or irrigation… We should question this situation.”

Ankara is making progress on this front: “We are planning to make the best use of Ankara’s wastewater in order to reuse it in agriculture,” Nursen Turan, press manager of ASKI, said by email.

Another solution involves water catchment and treatment systems. “Rainwater drainage systems and sewage systems must be separated from each other in all residential units,” Cukurcayır said. “If this is achieved, the load of both treatment systems will be reduced, serious energy saving will be achieved, and the use of rainwater in daily life and industrial situations will be provided.”

Better monitoring programs could also help. Istanbul is taking action on this with the establishment of a Water Control Center (ISKOM). IBB said of the program: “The whole process from the water source to the distribution to residents, and its reuse after, is monitored by the coordination and control center.”

“We give free water-saving devices to the residents who use 30 cubic meters of water per month and above and so have achieved up to 20 percent savings per month,” IBB added, referring to a program that targets residents with high water usage.

While these local solutions are vital, global action on climate change is also essential to addressing water scarcity in Turkey. Turkish environmentalists point to the importance of the Paris Climate Agreement in particular. Turkey has signed the 2015 agreement but hasn’t yet ratified it in parliament. Forty-seven environmental NGOs have called on the government to ratify it with a petition campaign.

“Of course, ratifying the Paris Agreement alone is not enough to stop the climate crisis, but we can consider it as a first step,” said Ayse Nur Ayan from the Bugday Association, which has joined the petition effort. “To exit from this crisis at once, Turkey must ratify the agreement, and then set targets and policies to reduce carbon emissions.”

This point resonates with Turkey’s young environmentalists like 16-year-old Doruk Dolapcioglu and his 13-year-old sister Deniz Dolapcioglu, who run an Instagram account focused on climate change advocacy. They attend protests and give seminars in schools about climate change.

Deniz said she panicked this past winter when she heard that Istanbul didn’t have enough water for the next few months “I thought if the water is under threat, my future is also under threat.”

“I think young people felt frightened more than adults in the last drought,” Doruk added. “Even if we have water now, the danger of water scarcity continues. We shouldn’t be relieved before this problem is solved permanently.”

Sumeyra Tansel is a freelance journalist who writes about environmental and social issues, politics, and minority rights. She won the Journalism Achievement Award of the Turkish Journalism Association in 2016.